Improv class: Steelers' offense at ease operating on the fly 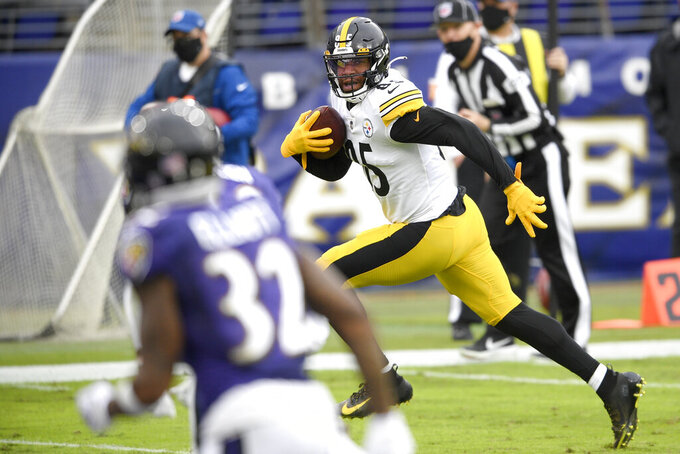 Pittsburgh Steelers tight end Eric Ebron (85) runs with the ball before scoring a touchdown on a pass from quarterback Ben Roethlisberger, not visible, during the second half of an NFL football game against the Baltimore Ravens, Sunday, Nov. 1, 2020, in Baltimore. (AP Photo/Nick Wass)

PITTSBURGH (AP) — The Pittsburgh Steelers spent the first half against Baltimore stuck in neutral. James Conner couldn't get anything going on the ground. Ben Roethlisberger couldn't find any rhythm. And the NFL's last unbeaten team couldn't have looked more listless offensively.

So they did something that's both a testament to Roethlisberger's experience and the precociousness of his team's young receivers.

They blew it up. All of it, ditching their normal pace for something more up-tempo, a decision that gave Roethlisberger plenty of freedom to do as he pleased. Sort of.

“Truthfully, it was ... 'Line, here is the protection. Receiver, you go over here this time. You go over here,'" Roethlisberger said.

The 17-year veteran likened it to backyard football, making it up as he went along. Coach Mike Tomlin and offensive coordinator Randy Fichtner pushed back on Roethlisberger's characterization a bit, likening it more to Roethlisberger “ad-libbing” instead of hijacking the play-calling duties. However it went down, it worked.

Roethlisberger completed 17 of 22 passes for 158 yards and two scores in the second half, most of them short passes to a group of receivers age 24 or younger. Three of Pittsburgh's wideouts — Diontae Johnson, Chase Claypool and Ray-Ray McLoud — are still in the early stages of developing their rapport with Roethlisberger.

That didn't stop Roethlisberger from going to the line of scrimmage against Pittsburgh's AFC North rival and barking out a route combination to one side, turning his head and doing the same to the other.

Though the COVID-19 pandemic forced the team to conduct organized team activities and mini-camp virtually, Roethlisberger credited some of the work the team put in at Robert Morris University during the acclimatization process with setting the groundwork for what they did in Baltimore.

Those drills were run in shorts without a helmet against no defense. Last Sunday, the Steelers did it against one of the league's best secondaries.

“I think it really comes back to those guys making plays, not physically but mentally,” Roethlisberger said. “To line guys up and not really have many questions, it goes back to the offseason work we did.”

The Steelers (7-0), who face the Dallas Cowboys (2-6) on Sunday, are unlikely to let Roethlisberger make it up as he goes along every week. But knowing they can do it under pressure gives them another weapon in their increasingly diverse arsenal.

“(The circumstances) required that we pick the pace up and utilize some of that (no-huddle) stuff," Tomlin said. “We weren’t drawing in the dirt.”

Not exactly. The team sprinkles some no-huddle sets into practice each week, sometimes when facing the starting defense in shells. Depending on how fast they operate, sometimes the only communication over the headset from Fichtner to Roethlisberger is a reminder of the down and distance or a reminder to be ready for pressure.

Fichtner understands Roethlisberger's comments can lead to the impression the quarterback is running the offense.

That characterization would have rankled former offensive coordinator Todd Haley, who helped Roethlisberger put up gaudy stats during his highly productive six-year tenure from 2012-17. The decidedly lower-key Fichtner isn't particularly worried about who gets the credit.

“I have no ego,” he said. “I want to move the ball as much as anyone for the Pittsburgh Steelers. ... Whatever gives us the best chance to do that, we’ll do.”

Roethlisberger directed most of the praise to his receivers. During the week, he will send images to their iPads along with thoughts on how they might want to implement certain concepts during the game. The fact they seem to know where to go offers proof they have bought in.

Against the Ravens, it was calling a bunch of short routes designed to prevent Baltimore's pass rush from getting home. It could have led to chaos. It didn't.

“It’s not about me,” Roethlisberger said. “I just have to tell them what to do. They have to physically do it and mentally know what to do. They did it so well last week. I couldn’t be prouder of the guys for that. All of them.”

NOTES: DT Tyson Alualu (knee) did not practice for a second straight day on Thursday and is likely out against Dallas. DT Isaiah Buggs, who replaced Alualu after Alualu exited in the first half against Baltimore, did not practice on Thursday due to an ankle issue. ... OL Stefen Wisniewski, attempting to come back from a pectoral injury sustained in Week 1, also did not practice. ... CB Mike Hilton (shoulder) was limited. Hilton has missed each of the last two games.