It all adds up: Lineman John Urschel loves his post-NFL life 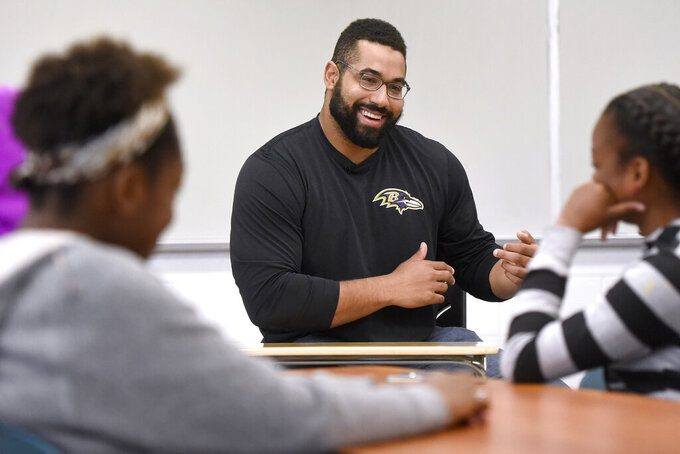 FILE - In this Tuesday, July 18, 2017, file photo, Baltimore Ravens lineman and math scholar John Urschel teaches a STEM lesson at Dundalk High School in Baltimore. Urschel is loving life after the NFL. It's been nearly two years since the offensive guard retired after just three seasons with the Baltimore Ravens. The 6-foot-3, 300-pound Canadian left millions of dollars on the table to pursue his two loves _ mathematics and time with his 16-month-old daughter, Joanna. (Steve Ruark/AP Images for Texas Instruments, File)

John Urschel is loving life after the NFL.

It's been nearly two years since the offensive guard retired after just three seasons with the Baltimore Ravens. The 6-foot-3, 300-pound Canadian left millions of dollars on the table to pursue his two loves — mathematics and time with his 16-month-old daughter, Joanna.

"My mindset really changed over my time in the NFL," Urschel told The Canadian Press by phone recently. "I'd become more passionate about math and started my Ph.D at MIT and every semester I had to leave it got tougher and tougher.

"I'd also become a father and having a little one sort of changes your perspective. The most important things in my life are doing math at a really high level and raising my daughter being able to do both for a really long time."

That wasn't always the case. Urschel said that in high school and at Penn State, football was a top priority, although a pro career necessarily wasn't.

The NFL was "a very late thing," he said. "Very early on, what I dreamed of was being an offensive lineman in the Big Ten.

"Let me tell you, playing at Penn State, starting at Penn State and getting all Big Ten honors my last two years there, that was like a dream come true for me. My years at Penn State where my happiest playing football in my life and really shaped me as a person."

The NFL came calling in 2014 when Baltimore selected Urschel in the fifth round, No. 175 overall. Urschel appeared in 40 games with the Ravens, starting 13.

He suffered a concussion during practice in 2015 shortly after being accepted at MIT. He resumed playing but said leaving the game healthy was a big reason why he retired early.

"You play in the league for a long time and you can't walk when you're 50," he said. "I'm looking at some of these mathematicians, these 60-, 70-year-old guys walking around, they're sharp, they're teaching math.

"I don't want to be some guy when I'm 50 who can't walk around a classroom or my shoulder is so bad I can't do a lecture and write something on the chalkboard. Yes, everyone focuses on the head, but for me it's really about the whole body."

"I'm loving my life right now," he told the CP. "I'm finishing my Ph.D in math at MIT, I've got one more year left and my daughter is running around and talking a lot.

"I'm trying to teach her how to count but she's a little resistant. She knows all the names of the pieces on a chess board, 20 different animals but for some reason counting she's not feeling it yet. So, yeah, everything is good over here. I'm very happy I retired exactly where I did."

Urschel grew up in Buffalo, New York, with his mother, a lawyer. Urschel's parents separated when he was 3. His father is a thoracic surgeon who also played linebacker at the University of Alberta.

Since retiring Urschel also co-authored his memoir, "Mind and Matter," with his wife, Louisa Thomas, a journalist.

"I wanted to write a book detailing my journey and experiences with mathematics," he said. "I wanted to share my love of math and also perhaps train certain peoples' thinking about math and show them some of the beauty, elegance and importance of mathematics.

"Penguin Books loved the idea but really convinced me that just doing a memoir about mathematics would really be doing myself and the audience a disservice. So that's how the book in its final form came to be, sort of a true memoir of my life from childhood until I retired from the NFL. I must say, they were absolutely right."

Urschel called the process of putting pen to paper, "amazing."

"Louisa was really the driving force who really helped with the narrative and talking about the finer points of my life and football," he said. "But for me, detailing mathematics, my experiences with mathematics and trying to explain that to a broad audience, that's my bread and butter."

Once he has his doctorate, Urschel has a definite career path.

"Academia," he said. "I love research, I love going into the office and trying to solve really hard, open problems, I love learning new things.

"I've also found I really love teaching and inspiring young people with mathematics. I'm really looking forward to being a professor. When you can help someone learn and understand something, that's such an amazing feeling."

Urschel doesn't really miss football but that's not necessarily a slight on the game.

"I'm not really the type of person to miss something, it's not in my nature," he said. "I'm a very forward-looking person.

"I'm just so happy with all the things I'm doing right now that I don't really look back and say, 'Man, I miss this, I miss that.' If I had it all over to do again, I don't think I'd change a thing. ... I'm very pleased with the major decisions in my life."