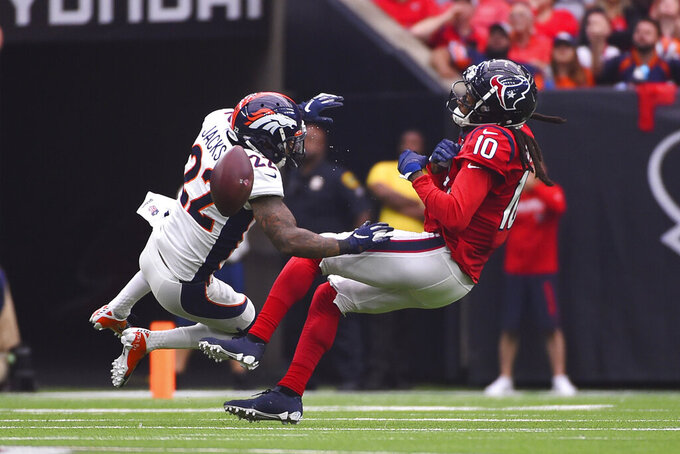 ENGLEWOOD, Colo. (AP) — Kareem Jackson's suspension robs the Denver Broncos of their defensive anchor and the only member of their celebrated 2019 free agency class to make an immediate impact.

Jackson, who was named a Pro Bowl alternate hours after being suspended, collected 71 tackles, 10 pass break-ups, two interceptions and a fumble returned for a 70-yard touchdown in the first season of a three-year, $33 million contract he signed with Denver.

The converted cornerback was named the AFC's top defender for Week 14 after he became just the third player in league history to record 10 or more tackles, intercept a pass and score on a fumble return in the same game -- and he did it in his return to Houston, a stunning 38-24 victory.

If tackle Ja'Wuan James (knee) misses a 12th game, as coach Vic Fangio expects, none of Denver's four big free agent signings will be on the field Saturday when the Broncos (5-9) host the Detroit Lions (3-10-1).

He was pulled over around midnight on Sept. 19 and ticketed for speeding and driving under the influence. He pleaded guilty on Monday in a court in Denver to a reduced charge of driving while ability impaired.

"We talked a little bit about it today," Fangio said Wednesday. “Obviously we're disappointed. Just emphasized to them it's always good to learn from others' mistakes and learn from Kareem's mistake. It was a one-time thing and we don't anticipate it happening again, but those one-time things can come back and bite you.”

In addition to legal fees and court fines ($912), Jackson, who declined to appeal his suspension, will lose two game checks totaling $352,941.

That figure would have been much higher had he appealed and served the punishment in 2020, when his salary jumps to $11 million. That means a two-game suspension next season would have cost him $1,294,000.

If he gets another DUI, Jackson would be suspended for eight games and lose half of his salary, which would amount to $5.5 million in 2020 or $5 million in 2021.

Marshall has played in every game this season, mostly on special teams. The last two weeks, he was the dime defender joining starters Jackson and Justin Simmons and nickel back Will Parks. Now, cornerback Duke Dawson Jr. will play the dime.

"We haven't seen Trey play a lot of defense since the preseason," Fangio said. "But he gets reps in practice and we're confident he can go out there and do his job."

Marshall, who spent last season on the Broncos' practice squad before a December promotion, said he sees this "as a great opportunity to go out here and showcase my abilities."

"Oh yeah, I'm more than ready," said Marshall, who vowed to bring the same intensity Jackson did to the position and said he will lean heavily on Simmons, who "is one of the guys who's really in tune to details of the game plan. You can always rely on a guy like that."

Simmons's snub from the Pro Bowl was a sore spot with his teammates, who also believe receiver Courtland Sutton was robbed. Sutton was at least named an alternate.

"I thought Justin and Courtland definitely deserved to be in there," Fangio said.

In an interview with The Associated Press and The Athletic, Sutton said, "I was talking to Justin, because he and I are locker mates, and I was telling him, ‘Everyone was saying I got snubbed,’ but Justin, people aren't talking enough about that situation. Justin is playing his butt off this year and if there's a deserving guy, he's deserving. ...

"Ultimately it's a motivating tool to continue to stay on the path, because obviously I'm doing something right and the people see it besides the popularity and votes around the league. It's more (that teammates) see it, I know that I'm progressing and pushing myself to become better each and every day. As long as I'm staying true to that, that's really all that matters to me honestly.