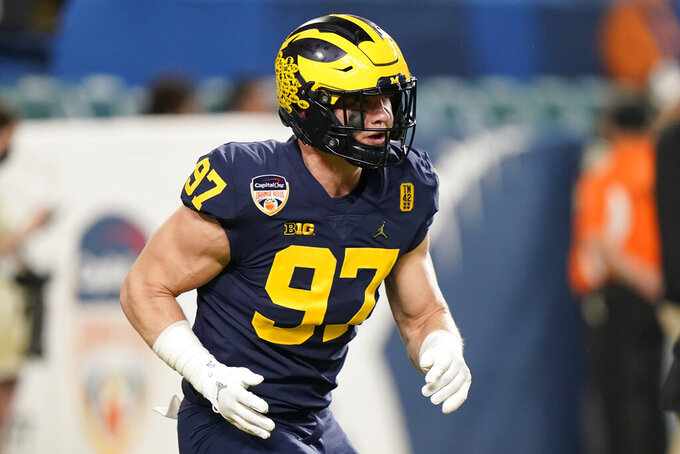 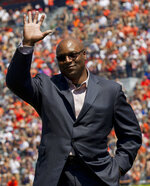 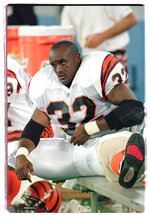 No team or general manager in the NFL’s modern era (since 1970) has drafted No. 1 in three straight years. Tampa Bay would have done it as a fledgling expansion franchise in 1976-78, but the Buccaneers traded the top pick in 1978 to Houston. The Oilers then selected Pro Football Hall of Fame running back Earl Campbell.

Jacksonville will be the fourth franchise – two of the others have accomplished the dubious feat twice – with the first pick in back-to-back years when the Jaguars open the NFL draft Thursday night in Las Vegas.

Jacksonville, which chose Clemson quarterback Trevor Lawrence last year and is expected to add Michigan pass rusher Aidan Hutchinson, Georgia's Travon Walker or an offensive tackle next, is looking to become the first to say it nailed both selections. Here’s a look at how the others panned out:

Mayfield, picked ahead of Buffalo's Josh Allen and Baltimore's Lamar Jackson, looked like he might end the team's decades-long search for a franchise QB while leading the Browns to a playoff victory in 2020. But he regressed last year and is now on the trading block. Cleveland pursued Deshaun Watson, prompting Mayfield to request a trade, and then signed the embattled Houston star to a $230 million contract.

Garrett, meanwhile, has developed into one of the league’s top pass rushers. The three-time Pro Bowl selection has 58 1/2 sacks in five seasons and has been at his best since returning from a lengthy suspension for a helmet-swinging attack on Pittsburgh quarterback Mason Rudolph.

The Browns took Kentucky quarterback Tim Couch and Penn State defensive tackle Courtney Brown in back-to-back years. Both played well as rookies before having their careers cut short by injuries.

Couch did lead Cleveland to the 2002 postseason and holds the distinction as the only one in NFL history with two game-winning TD passes (50 yard or longer) on the final play. Brown totaled 17 sacks in 47 games spanning five seasons in Cleveland.

The picks look worse when considering who the Browns could have taken instead. Donovan McNabb went second to Philadelphia in 1999; Washington landed linebacker LaVar Arrington at No. 2 in 2000.

Although “Big Daddy” Wilkinson never made a Pro Bowl, he enjoyed a 13-year NFL career in which he played 195 games. Most of those came in another uniform. The Bengals traded Wilkinson in 1998 after he called Cincinnati a racist city.

Carter, meanwhile, is widely regarded as one of the worst No. 1 picks in NFL history, in the same group as Oakland quarterback Jamarcus Russell (2007) and Indianapolis defensive end Steve Emtman (1992). Carter tore a knee ligament in his first preseason game and missed most of two more seasons with the Bengals because of injuries.

The Buccaneers took Heisman Trophy winners Bo Jackson and Vinny Testaverde in back-to-back years, but only one of them ever played a down for Tampa Bay.

The Bucs drafted Jackson in 1986 despite Auburn’s two-sport star repeatedly telling them before the draft he would never play for Tampa Bay. Jackson believed the Bucs sabotaged his college baseball career by telling him that a visit to team headquarters during his senior season had been cleared by the NCAA and the Southeastern Conference. It had not been, and the SEC declared Jackson ineligible.

Jackson turned down a $7.6 million contract offer from the Bucs and chose to play baseball for considerably less in Kansas City. Tampa Bay forfeited Jackson’s draft rights the following year, and the Los Angeles Raiders used a late-round flier on Jackson. He became a full-time baseball player and part-time football player for four years before a dislocated hip derailed his pro career.

Testaverde did little to help Tampa Bay offset the sting of missing out on Jackson. The former Miami star threw a whopping 35 interceptions in his first full season as a starter (1988). He improved with age and experience but failed to produce a winning record in six years with the Bucs.

The Bucs had a chance to hit a pair of home runs after landing Hall of Famer Lee Roy Selmon with the team’s inaugural pick in 1976. But coach John McKay went with USC running Ricky Bell over Pittsburgh star and 1976 Heisman Trophy winner Tony Dorsett the following year.

Dorsett was widely seen as a better all-around back, but McKay previously coached Bell at USC. Bell led the Bucs to the playoffs in 1979 – his only 1,000-yard season — but weight loss and migraines forced him out of the league by 1983. He was later diagnosed with an incurable inflammation disease that causes muscle weakness and skin rash. He died at age 29 following a heart attack.