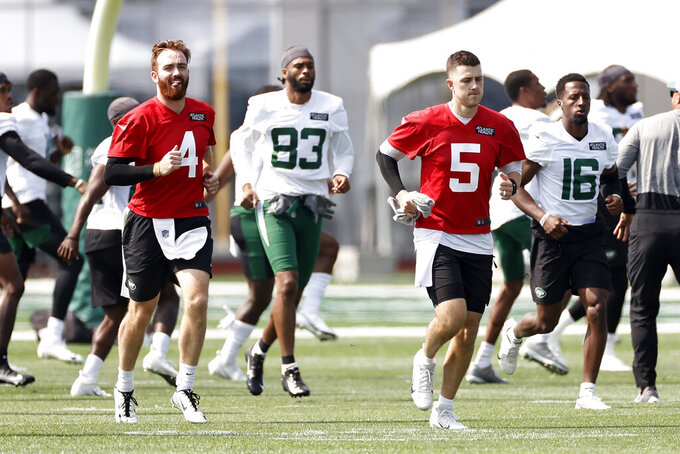 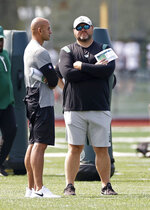 Zach Wilson remained unsigned Wednesday, the only first-round draft pick to not have a deal done after San Francisco signed quarterback Trey Lance earlier in the day.

“Obviously, from the business side of it, there's a lot of things that come into play,” coach Robert Saleh said.

With Wilson, the No. 2 overall selection, still not signed, Mike White took the first snaps at practice with the Jets' starters. James Morgan is New York's only other quarterback on the roster.

When asked when he and the Jets would need Wilson on the field and practicing, Saleh smiled.

Wilson’s contract is slotted, per the NFL rookie wage scale, to be worth $35.15 million over four years and includes a $22.9 million signing bonus. But it appears the sides — the Jets and general manager Joe Douglas and Wilson's agents — are working out offset language, a sticking point in the negotiations. That practice, shared by most NFL teams, provides clubs with financial protection if they release the player before the end of a contract.

“Joe's dealing with it,” Saleh said. “Joe's got a great handle on it. When he signs, he signs. There are 89 other guys that deserve our attention. That's where all our focus is right now.”

The former BYU star — once he signs — is expected to start Week 1 for the Jets, who moved on from Darnold in the offseason by trading him to Carolina a few weeks before the draft. Douglas and Saleh zeroed in on Wilson after being thoroughly impressed by him at his pro day at BYU.

Now the Jets just need to get him signed and into camp.

“It’s obviously different, but we’ve got to make do with what we’ve got,” wide receiver Corey Davis said. "Zach is working out the business side of things, which we all understand. When he gets here, he'll hit the ground running.”

Saleh didn't rule out signing a veteran quarterback for the quarterback room, but he also stressed that the Jets want to give White and Morgan as many snaps as possible in Wilson's absence.

“You see talent, you see potential,” Saleh said. "You see all of that stuff, so to give up on those guys just for the sake of bringing someone in to be, call it a pacifier if you will, call me crazy, but I think sometimes that can be seen as a cop-out.

“Does it mean those aren't valid? They are. But I think every case is unique to itself. If it was pressing and something to be nervous about, then, yeah, I'd say you have a valid point. But there are a lot of things involved and it's a lot harder than to just say bringing in a veteran will make everything better.”

NOTES: The Jets announced they will wear “GK” decals on the back of their helmets in honor of late assistant coach Greg Knapp, who died last Thursday from injuries suffered when a car hit him while he was riding his bicycle in California on July 17. ... Saleh expects S Ashtyn Davis and DE Vinny Curry to be sidelined with their injuries until no later than Week 2 of the regular season. Davis (foot) is on the physically unable to perform list, while Curry (undisclosed) is on the non-football injury list. ... DLs Quinnen Williams (foot) and Kyle Phillips (ankle) should be back in time for the second preseason game at Green Bay on Aug. 21. ... Saleh said OT George Fant, who's on the COVID-19 list, tested positive for coronavirus and will be in quarantine for 10 days. ... CB Bryce Hall had an excused absence from practice for the birth of his child. ... Saleh said 81 of 90 players are fully vaccinated, while all of the coaches on his staff has received the vaccine.