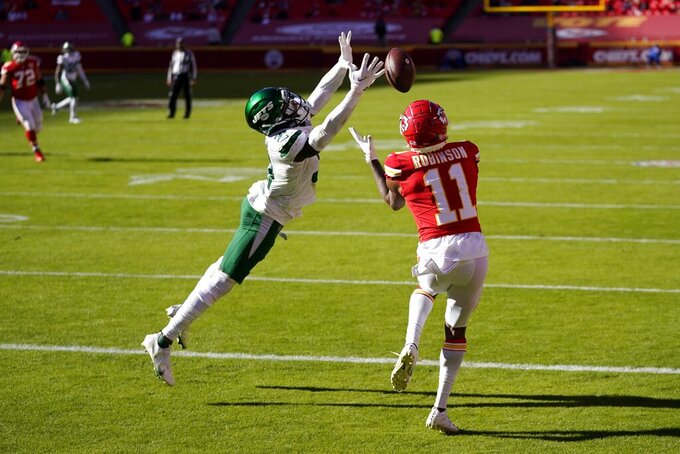 Austin injured his neck in practice Wednesday. He sat out Thursday, had an MRI and was cleared to practice Friday. The second-year cornerback participated on a limited basis and was listed as questionable, but he was expected to be able to play Sunday at Los Angeles against the Chargers.

The 0-9 Jets head into the game with just five healthy cornerbacks, three of them rookies. Bryce Hall, a fifth-round pick, made his NFL debut last week after missing the first eight games while recovering from an ankle injury that cut short his college career. Lamar Jackson, who might start Sunday opposite Hall, and Javelin Guidry are the team’s other rookie cornerbacks.

Arthur Maulet, who has played in 28 games and started seven, and Corey Ballantine, who was claimed last week off waivers from the Giants, are also cornerbacks with experience. New York released Quincy Wilson on Nov. 6 and Pierre Desir — who had been a starter — on Tuesday. Starting nickel back Brian Poole was placed on IR this week with a shoulder injury and needs season-ending surgery.

The team also announced Saturday that outside linebacker Frankie Luvu was activated from IR and quarterback Mike White was signed from the practice squad.

Luvu missed three games with a groin injury. White will serve as the backup to starter Joe Flacco with Sam Darnold sidelined for the second straight game with an injured shoulder.