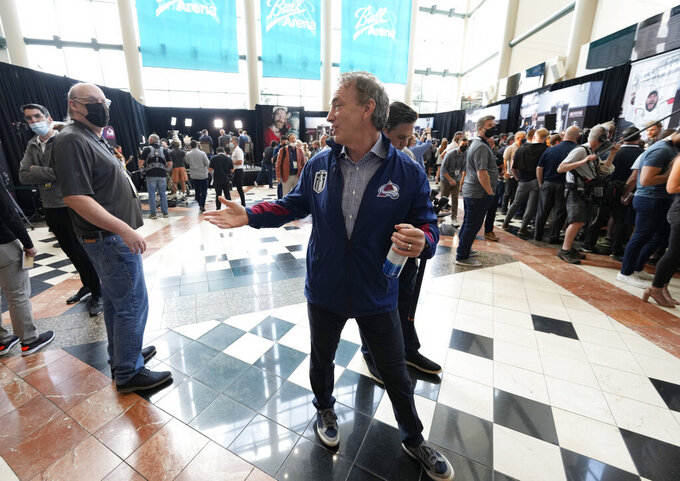 DENVER (AP) — Joe Sakic was so busy relishing and reminiscing that he nearly missed the team photo with the Stanley Cup before racing over just in time to join the on-ice celebration at Amalie Arena.

The general manager of the Colorado Avalanche joined fellow Denver icon John Elway in leading his team to a championship from the front office two decades after winning a pair of titles during his Hall of Fame playing career.

A star captain and center when the Avalanche won it all in 1996 and 2001, Sakic secured a third Stanley Cup championship Sunday night as the architect of the star-studded firebolt of a team that dispatched the back-to-back defending champion Tampa Bay Lightning in six games.

Sakic joined Elway's exclusive club when the Avalanche completed their dominant playoff run with a 2-1 win in Game 6 in Tampa.

Elway led the Broncos to Super Bowl wins in his final two seasons as their quarterback in 1997 and '98 and he added one as an executive when Denver won the Super Bowl six years ago with a historically dominant defense and an aging but still masterful Peyton Manning.

Just as Elway returned his beloved Broncos to the top of the NFL world, Sakic built the Avalanche team just about from scratch. They shook off stumbles and heartbreaking early exits from the NHL playoffs over the last few years to outlast the Lightning and become the first team ever to clinch four best-of-seven series away from home.

Thanks to deft decisions by Sakic and the steady leadership of coach Jared Bednar, the Avalanche began the season as Cup favorites and lived up to those lofty expectations.

They swept Nashville and Edmonton and dispatched St. Louis in six games to reach their first Stanley Cup Final in 21 years. After a nine-day layoff, they vanquished a Lightning team that had won 11 consecutive playoff series, an astounding feat in the salary cap era.

With a deep roster filled with top draft hits like Gabriel Landeskog, Nathan MacKinnon and Cale Makar and key deadline acquisitions including Josh Manson, Artturi Lehkonen and Andrew Cogliano, the Avalanche twice beat the Lightning in overtime, routed them 7-0 in a Game 2 masterpiece and clinched their third Cup with another gem Sunday night.

Their 72 combined wins in the regular and postseason this year tied for most ever as did their 10 comeback wins in the playoffs. Their nine road wins are the second-most all-time.

Elway said that over the years he and Sakic occasionally commiserated over how it was so much easier on both of them to guide their teams to titles back when they were playing the games instead of sweating it out watching them.

“Being a GM was fun because you can’t play anymore and it’s good to keep close to the game,” said Elway, who has transitioned into a consultant role with the Broncos following the expiration of his contract earlier this year. “But I’ll tell you what, it’s pretty nerve wracking being the GM.”

Sakic had a major rebuild on his hands when his friend and former teammate Patrick Roy resigned as head coach on the eve of the 2016-17 season and Bednar, fresh off winning the Calder Cup, oversaw a 48-point slog through his first year as an NHL head coach.

“Yeah, we had the worst record but we had some really good young players that were about to become stars and a great core and we just built around them, we got a little bit younger and faster," Sakic said after hoisting the Cup for the third time.

Sakic stuck with Bedar after that initial 22-win season and then selected Makar, who at the tender age of 23 on Sunday night became the first player to win the Hobey Baker Award as the best college player, the Calder Memorial Trophy as the top rookie, the Norris Trophy as the league's best defenseman, the Conn Smythe as the playoff MVP and the Stanley Cup championship.

Five years after their crash-and-burn season, the Avalanche are preparing for a championship parade Thursday in downtown Denver after upending the Lightning and their superstar goaltender Andrei Vasilevskiy.

The Avalanche won it all even though they didn't have a superstar in net like most champions. Darcy Kuemper, however, went 10-4 in the playoffs and won twice in Tampa. Pavel Francouz won all six of his starts in the playoffs when Kuemper was sidelined after getting poked in the eye.

The Avs relied on their superior speed, enviable depth and defensive discipline, and while they certainly leaned on their star players, they also relied heavily on longtime veterans that Sakic brought to Colorado such as Jack Johnson and Cogliano.

Sakic said he was just as happy for them.

“These older guys have been around a long time and had the opportunity to win their first Cup," he said. "And being a former player, I know how happy they are right now and how relieved they are to finally have the opportunity to raise the Stanley Cup.”

As was Sakic himself.