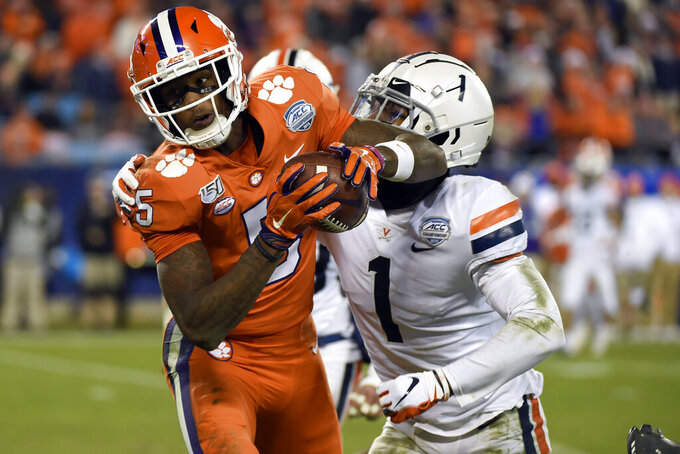 FILE - In this Dec. 7, 2019, file photo, Clemson wide receiver Tee Higgins (5) catches a pass while Virginia cornerback Nick Grant (1) defends during the second half of the Atlantic Coast Conference championship NCAA college football game in Charlotte, N.C. The NFL's shutdown because of the coronavirus pandemic is denying teams the opportunity to get face time with draft prospects who have been injured, have checkered pasts or are under the radar. Higgins’ 6-foot-4 frame and superb hands stand out in a deep pool of receivers. Speed is the question, and a private workout might have helped. (AP Photo/Mike McCarn, File)

With franchise quarterback Joe Burrow in hand, the Bengals went for a highly regarded target Friday night with the opening pick in the second round. Clemson's Tee Higgins gets to join his favorite NFL team and meet his favorite player.

Higgins admires Bengals receiver A.J. Green, with whom he'll play for at least one year.

“I actually model my game after him,” Higgins said. “Man, it's crazy. I was just talking about this to my good friend — I could end up with the Bengals and be his teammate one day. Now that this moment is here, it's surreal.”

The last time the Bengals took a throw-and-catch tandem at the top of the draft, things turned around for a while.

They chose Green in the first round in 2011 and Andy Dalton in the second. Together, they led the Bengals to the playoffs a club-record five consecutive seasons, but lost in the first round each time, setting an NFL record for futility.

The Dalton-to-Green connection has been one of the most successful in Bengals history even though it hasn't gotten them a playoff win. After the first two days of the draft, it's ready to be relegated to the team record books.

Burrow went to the Bengals first overall on Thursday night and is expected to start immediately. The national champion and Heisman Trophy winner from LSU will supplant Dalton, who has a year left on his contract and could be kept around to ease the rookie's transition.

Green is around for only one more year guaranteed, as the Bengals used their franchise tag on him for 2020. The receiver wants a multi-year deal to stay in Cincinnati, but the sides haven’t been able to agree.

Green is coming off his second straight season marred by injury. He missed all of 2019 after tearing up his left ankle during the first workout of training camp.

“We want him here for a long time,” coach Zac Taylor said. “This in no way, shape or form affects what we think about A.J.”

Higgins hasn't met Green, who has a similar build and game.

“I always wanted to see what he's doing and try to do it on the field the next day in practice,” Higgins said. “Me watching him growing up, it's crazy.”

An offense that has struggled the last few seasons because of injuries and an ineffective offensive line has added collegiate playmakers who could reshape it quickly. The Bengals also return receivers Tyler Boyd and former first-round pick John Ross, along with running back Joe Mixon.

“It doesn't matter who your quarterback is, you want him to have as many weapons as possible," Taylor said. “A lot of great offenses have those weapons at their disposal.”

The Bengals zeroed in on their biggest hole on defense with their third-round pick, taking inside linebacker Logan Wilson from Wyoming. Taylor's staff got familiar with Wilson while coaching at the Senior Bowl and identified him as an early-round pick.

“We certainly identified linebacker as a position of need, somebody we needed to add at some point," Taylor said. “Logan was certainly one of those guys we put in that top tier right away.”