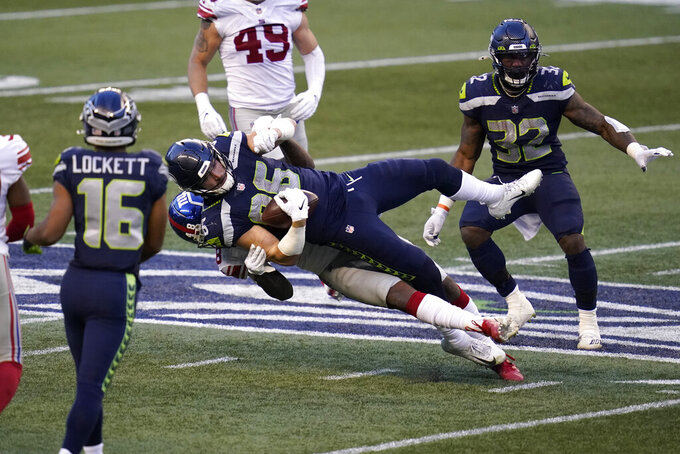 SEATTLE (AP) — As easy as it is to lump the Seattle Seahawks among the contenders to win the NFC, their performance on Sunday is yet another reminder why they could be more prone for an early playoff exit than any sort of deep postseason run.

The Seahawks are maddeningly inconsistent and likely blew their chance at the No. 1 seed in the NFC with their unexpected 17-12 loss to the New York Giants.

While Seattle’s defense was leaking at a record pace earlier in the season, it’s now the offense that can’t seem to get going. Russell Wilson has gone from being a leading MVP candidate to not finding himself in the conversation.

Seattle (8-4) has too much talent and too favorable a schedule over the final quarter of the season not to find itself in the playoffs. But teams with championship aspirations should thump overmatched opponents at home like the Giants, not suffer stunning losses that set off alarms of concern.

“We’ve shown some vulnerability at 8-4 that we can let some games get away from us,” Seattle coach Pete Carroll said on Monday. “We really have high expectations to play well every time out and find a way to win. It certainly can happen. You got to get everything done, every week.”

Heightening the concern was the poor performance of Wilson, who took several sacks by holding the ball too long, seemed hesitant to make throws and had two turnovers.

After scoring at least 27 points in each of the first eight games, the Seahawks have topped that mark just once in the past four.

“It’s going to be more challenging. Early in the year it was wide open, it was like the wild west out there on offense,” Carroll said. “We fell prey to that as well. But it’s tightening down.”

Give defensive coordinator Ken Norton Jr. credit. A mess one month ago, Seattle’s defense has been solid for the past 3½ games. The turnaround started in the second half of Seattle’s loss to the Los Angeles Rams and continued with wins over Arizona and Philadelphia. Take away a handful of plays in the third quarter on Sunday and Seattle was again up to the task of doing enough to give Wilson and the offense a chance to win. Seattle allowed the Giants only 290 total yards, but giving up 190 yards rushing — 133 of which came in the third quarter — will bother Carroll and Norton. Still, surrendering just 17 points should be satisfactory for Seattle with the number of options on offense.

Seattle’s passing game needs to rediscover a third option in the passing game with so much focus on shutting down DK Metcalf and Tyler Lockett. Wide receivers David Moore and Freddie Swain had one combined catch on three targets. The absence of Greg Olsen seemed to be magnified as well as Seattle had very little success throwing down the middle against the Giants.

Seattle’s ability to avoid COVID-19 remains the best in the NFL to date. Seattle placed defensive tackle Bryan Mone on the reserve/COVID-19 list over the weekend. But Carroll said Monday that Mone has not tested positive and putting him on the list was out of concern about a close contact.

Mone has been on injured reserve because of an ankle injury and has had limited interaction with the team. Seattle was the last team in the league to put a player on the list.

While Wilson did not have his best day, the same could be said of offensive coordinator Brian Schottenheimer. The balance between run and pass was heavily titled toward the throw even with Seattle having both Chris Carson and Carlos Hyde available, albeit neither completely healthy. Seattle had just 15 combined runs from its running backs. Schottenheimer also had a few questionable play calls, none bigger than a fourth-and-1 rollout with Wilson in the third quarter that ended up as an incompletion.

Seattle lost offensive lineman Jamarco Jones (groin) and key reserve safety Ryan Neal (hip) to injuries in the loss to the Giants, but there is some good news. Cornerback Quinton Dunbar is expected to be back this week after missing the previous four games because of a knee injury. Seattle also thinks right tackle Brandon Shell could return from an ankle sprain that kept him out the past two games.

93.5 — That is Wilson’s passer rating over the past seven games where Seattle has gone 3-4. Wilson’s completion percentage is down, and he has 13 touchdown passes and eight interceptions over that span. In the first five games, Wilson had a passer rating of 129.8 with 19 TDs and three interceptions.

Maybe the best elixir for Seattle is its next opponent. The Seahawks will host the winless New York Jets next Sunday.