Lions made changes that may not translate to success in 2021 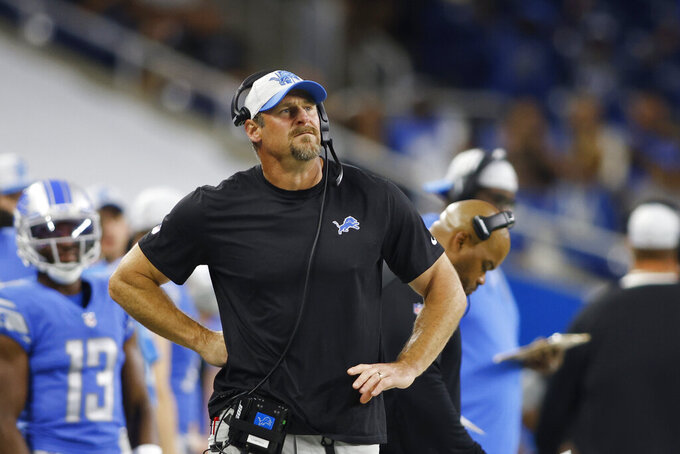 Detroit Lions head coach Dan Campbell watches from the sideline during the first half of a preseason NFL football game against the Indianapolis Colts, Friday, Aug. 27, 2021, in Detroit. (AP Photo/Al Goldis)

DETROIT (AP) — The Detroit Lions made a lot of changes in the offseason by bringing in a new general manager, coach and quarterback.

The franchise with one playoff victory since winning the NFL title in 1957 is coming off three straight double-digit loss seasons.

Detroit might be doomed with at least 10 losses again.

General manager Brad Holmes and coach Dan Campbell might be able to eventually turn the team around. It's just difficult for anyone outside the organization to envision that happening this season with quarterback Jared Goff and a defense that might not be better than last year's historically bad unit.

Goff, though, is refusing to buy into the belief that the lowly Lions are destined for failure.

“Internally, our expectations are win games and, first of all, win the division," Goff said.

If Detroit could pull off that stunning feat, it would be the franchise's first division title since the 1993 season.

“I’ll welcome any change that’ll help us win because we’ve lost a lot more than I’ve liked to around here," Decker said. “I want to see Detroit become a winner."

Campbell is getting his first chance to lead a team in the league at the start of a season. In 2015 in Miami, he was 5-7 as an interim coach with a team that was 1-3 when he was promoted.

Campbell knows there are people who doubt he can help Detroit become a winner and he hopes his players are fired up by those who believe they will fail on the field.

“If you are a true competitor, it gives you a kick in the rear," he said. “I like that and I know guys that we brought in here, they love it.

“We’ve got something to prove and we want to prove it.”

Detroit set itself up for jokes when it drafted another tight end in the first round two years ago, taking T.J. Hockenson with the No. 8 overall pick. No one is laughing at the decision now.

Hockenson earned Pro Bowl honors last season. He has gotten into even better physical condition this year, preparing him to be Goff's go-to target and to perhaps be considered among the league's best tight ends with Kansas City's Travis Kelce and Las Vegas' Darren Waller.

“He’s a great player and I think he has all the ability to be one of those guys," Goff said.

Holmes did not want to spend a lot of money in free agency to fills holes on defense, due to the team being in rebuilding mode, and passed on taking a defensive player in the first round.

The Lions’ best chance to compete in games, and possibly win some, will be to keep their defense off the field with a clock-eating running game.

D’Andre Swift, who had 878 yards of offense and 10 touchdowns as a rookie, and former Green Bay Packer Jamaal Williams give the team a solid pair of running backs. The offensive line seems to be relatively strong led by Pro Bowl center Frank Ragnow and Decker.

Detroit's weakest position group appears to be its receivers.

The Lions let Kenny Golladay, Marvin Jones and Danny Amendola walk in free agency. They missed in free agency on adding veterans to replace them, releasing Breshad Perriman and Geronimo Allison after both failed to be productive in the preseason.

The Lions also hope they caught a flyer by acquiring Trinity Benson from Denver in a trade, adding a receiver that was on the Broncos' practice squad the last two years and was likely going to be released.

Detroit drafted offensive tackle Penei Sewell with the No. 7 overall selection this year and he had some growing pains in the preseason, getting beat by backups.

“Everybody knows he has all the physical tools in the world," Decker said. “I think for him, it’s just getting repetitions."