Lions struggle toward finish line with what's left of roster 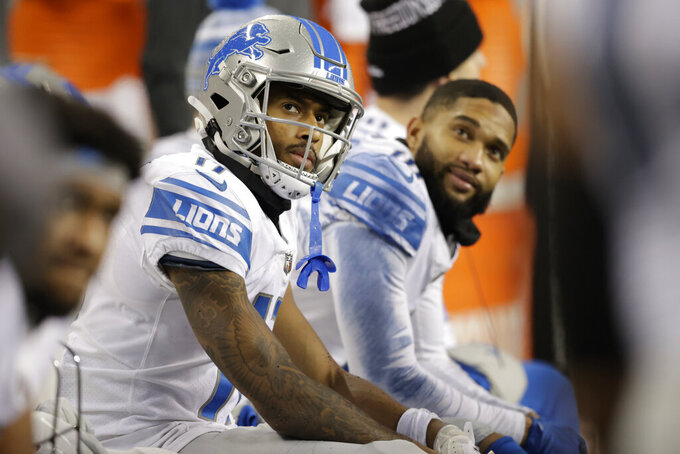 Detroit Lions wide receiver Trinity Benson, left, sits on the bench during the second half of an NFL football game against the Seattle Seahawks, Sunday, Jan. 2, 2022, in Seattle. (AP Photo/John Froschauer)

DETROIT (AP) — It has been a long season for the Detroit Lions, and there is still more adversity ahead.

At 2-13-1, things obviously haven’t gone well, but first-year coach Dan Campbell has been dealing with a roster decimated by injuries and COVID-19. More than 80 players have been active for at least one game and only one player — rookie offensive tackle Penei Sewell — has been able to stay on the field all year.

In the first 16 games, Sewell only missed four offensive snaps. On Monday, he was placed on the COVID-19 list.

“He’s been more mature than a normal rookie since the day he got here,” Campbell said Monday. “He’s as smart as a whip.”

“We have to prepare as if we’re not going to have them Sunday against the Packers, even though the new rules make it possible for them to be back,” Campbell said.

“We thought we had a good chance of getting (wide receiver) Josh Reynolds back for Seattle, and that didn’t work out, so we’re going to hope for the best and prepare for the worst.”

Reynolds came off the list on Monday, along with guard Halapoulivaati Vaitai and tight end Brock Wright. That should give Detroit’s passing game a few more options against the Packers after they were forced to throw back-to-back passes to offensive tackles against the Seahawks.

“We were using two brand-new tight ends last week, so we put in a formation with seven offensive linemen,” Campbell said. “That’s why we were throwing them the ball.”

Decker’s touchdown was the second of his career — he caught an 11-yard pass against the Los Angeles Rams on Dec. 2, 2018, — and he was more prepared this time. After his first score, he excitedly threw the ball into the stands at Ford Field, losing the chance at keeping it for his trophy case.

This time, he kept a firm grip on the ball throughout the celebration.

Detroit’s offense put up 29 points against the Seahawks, only the fourth time it has surpassed 20 this season. Granted, a lot of the points came after it fell behind 38-7 in the third quarter, but Detroit did it without Jared Goff and several of his best playmakers.

The Lions were 0-8 going into their bye, but went 2-3-1 in the next six games behind a vastly improved defense. Sunday, they collapsed. The Seahawks went three-and-out on their first drive of the game, then scored on their next nine possessions.

The only thing that ended the scoring parade was Russell Wilson ending the game by taking a knee at the Lions 1.

“I wouldn’t have had any problem with them running that one in,” Campbell said. “There are 60 minutes on the game clock, and if you have an issue with a team scoring on you, stop them from doing it.”

Backup quarterback Tim Boyle didn’t have a great game, throwing three interceptions in his third career start, but Campbell was happy with his progress.

“I thought he did a pretty good job of reading defenses and he made some really nice throws,” Campbell said. “He still plays a little too fast, so he’s not always set when he throws, but I think these reps have been invaluable for him.”

Russell Wilson was never going to be a great matchup for a short-handed defense, but the Seahawks came into the game at 5-10 with a below-average scoring offense. Giving up 51 points and having Seattle take a knee to keep it from getting higher isn’t a good look for anyone on that side of the ball.

The Lions are hoping to get Goff back against the Packers after he’s missed back-to-back games with COVID-19 and a nagging knee problem.

Finish the season without serious injuries and, as a bonus, try to beat a Green Bay team resting its top players for the postseason.