Mayfield out, Browns down several starters for Raiders game 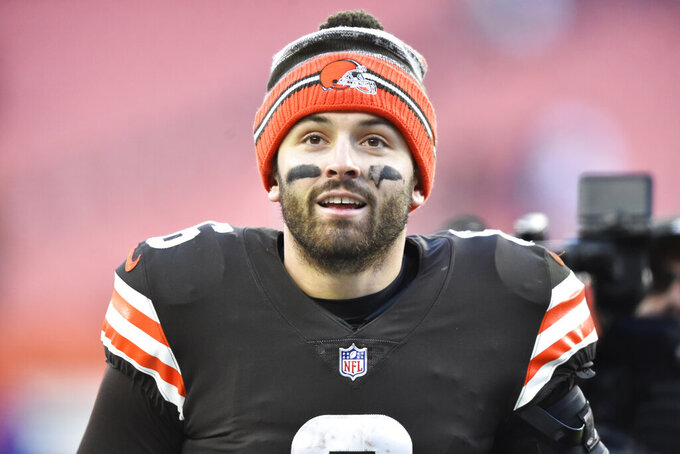 FILE - Cleveland Browns quarterback Baker Mayfield walks off the field after his team defeated the Baltimore Ravens in an NFL football game, Sunday, Dec. 12, 2021, in Cleveland. Mayfield and coach Kevin Stefanski tested positive for COVID-19 on Wednesday, Dec. 15, and will likely miss Saturday’s game against the Las Vegas Raiders as Cleveland deals with a widespread outbreak during its playoff pursuit. (AP Photo/David Richard, File)

The Browns quarterback didn't test negative for COVID-19 on Monday and will watch Cleveland's game against the Las Vegas Raiders from home as his teammates try to keep their postseason hopes strong.

With both Mayfield and his backup, Case Keenum, out, third-stringer Nick Mullens will start for the Browns, who were hit hard by a slew of positive tests last week and will be without coach Kevin Stefanski and up to 12 regulars for an important game.

The Browns had hoped the NFL's decision to postpone the game from Saturday until Monday would allow Mayfield and other sidelined players to return. However, Mayfield didn't produce a required negative test and safety John Johnson III was the only starter activated in the hours before Monday's kickoff.

Cleveland has 22 players, including nine starters and several key backups, on the COVID-19 reserve list.

Stefanski is missing his second big game in a year. He tested positive last week, when a slew of positive tests tore into Cleveland's roster and threatened to upend the team's chances of making the playoffs.

Last season, Stefanski missed the Browns' 48-37 win over Pittsburgh in the wild-card round, out with COVID-19 and Priefer and Van Pelt filling in.

Mayfield had missed only one game this season despite a variety of injuries. He'll now have to sit out as the Browns (7-6) try to stay in the thick of a tight playoff race. A win over the Raiders would put Cleveland in first place in the AFC North.

On Sunday, Mayfield posted on Instagram that he was asymptomatic and was "praying to test negative for COVID.”

“He has played good football,” Stefanski said. "He has some really good tape out there and is somebody that our personnel department has followed closely. He's done an outstanding job really for us all season long.”

The Browns got back powerful right guard Wyatt Teller on Sunday, and his return should allow Cleveland to better protect Mullens and perhaps count on running back Nick Chubb even more than usual.

The Browns' defensive front will be missing edge rusher Jadeveon Clowney and tackle Malik McDowell, and linebackers Jacob Phillips, Mack Wilson Sr. and Tony Fields II are all out due to the virus.

On Friday, the NFL bent after being determined to push forward and play, postponing Cleveland's game against Las Vegas along with two other games amid a wave of new COVID-19 cases across the league.

A day earlier, Mayfield criticized the league's policies on Twitter. He wrote: “Make up your damn mind on protocols. Showing up and making only 3 teams test?!? All so you can keep the game as scheduled to make money.”

In addition to moving the game back, the league adjusted the deadline for roster activation from Sunday at 4 p.m. until Monday at 2 p.m., giving players more time to produce a negative test — another change after requiring two negatives tests 24 hours apart.

The Browns activated seven players from the practice squad to fill out the roster for Monday's game.