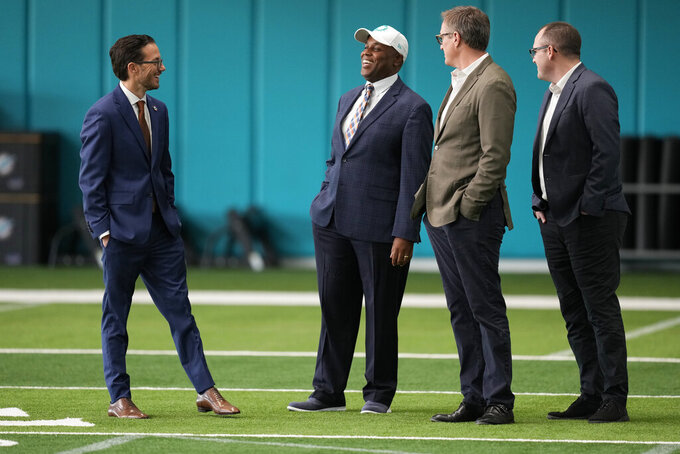 MIAMI GARDENS, Fla. (AP) — The Miami Dolphins introduced Mike McDaniel as their new head coach Thursday at a news conference during which the franchise owner and general manager only talked about the new hire.

McDaniel was hired Sunday, 27 days after Brian Flores was fired and five days after Flores filed a lawsuit accusing the NFL of systemic racism in its hiring practices and alleging that Dolphins owner Stephen Ross offered him $100,000 per loss during the 2019 season.

Ross and general manager Chris Grier did not field questions after making remarks about McDaniel, though the new coach was immediately asked whether he saw any warning signs before accepting the position.

“I can honestly say there was absolutely no red flags,” McDaniel said. “And the reason why was because I’m stepping into an organization with a boss that I don’t think people give their proper due, Stephen Ross. There’s no cost too high for winning for him. And when you’re in multiple organizations, you realize that’s not always the case.

“The city of Miami really, really is lucky to have an owner that, right, wrong or indifferent all he cares about is winning and as a coach that’s all you’re literally looking for. So red flags? No, there’s no red flags for me.”

McDaniel was hired after an almost four-week search, during which the Dolphins never announced candidate interviews — unlike their previous searches.

McDaniel reportedly interviewed with the Dolphins on Friday and was one of two finalists for the job. Dallas Cowboys offensive coordinator Kellen Moore was the other.

“We talked to many many very qualified candidates for this job in both pro and college football,” Grier said. “What resonated with us was how excited everyone was for this job. Even in the last two weeks, there were people that were calling trying to get into this job. Steve was very calculated and made sure that we didn’t rush this process. There were times when I was like, let’s go, let’s push this forward and Steve was, ‘Hey, let’s make sure we do this as thoroughly and correctly as we can.’”

Ross noted that when the Dolphins started the coaching search, his franchise was looking for someone would have an impact on the team — which he believed McDaniel will do.

“We were looking for the qualities of leadership, intelligence, innovation and someone who really understands what it takes for winning in the long run," Ross said. “First of all, he’s probably one of the brightest coaches that I’ve spoken to. When you talk to people, the first thing they’ll say about Mike is he is innovative, he is thinking outside the box. I had coaches in his former division calling me and telling me how great he was and I said, why are you calling? And they said, ‘Really, to get him out of the division.’ It says an awful lot about a person and who he is.”

Ross said McDaniel will report to Grier; Grier will continue to report to Ross and vice chairman/president/CEO Tom Garfinkel.

McDaniel’s coaching career, which began in 2005 as an intern with the Denver Broncos, includes three seasons with the Houston Texans when Grier’s father, Bobby, was an executive in the front office.

McDaniel said agreeing on personnel decisions wouldn’t be an issue with Grier, saying his input would be “as much as I want to talk, I guess.”

One of the most pressing order of business for McDaniel will be completing his coaching staff. The first two moves involved the Dolphins hiring Jon Embree as assistant head coach/tight ends coach and retaining special teams coordinator Danny Crossman, according to a league source.

Whoever lands the job of offensive coordinator won’t be calling plays, though, because McDaniel said Thursday he’ll be handling those duties with input from his assistants.