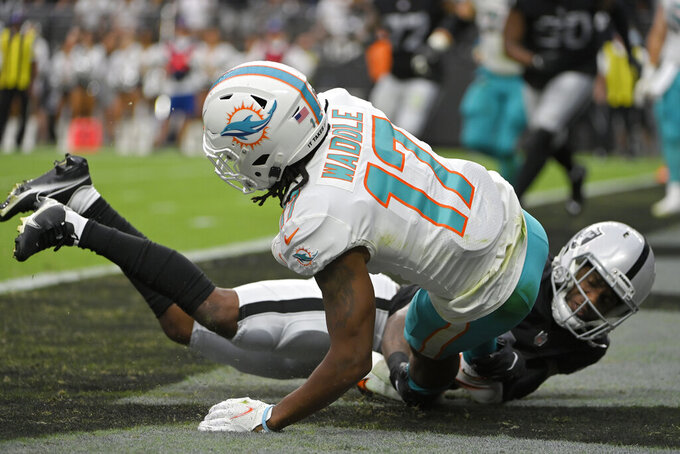 MIAMI GARDENS, Fla. (AP) — Jaylen Waddle is getting used to the differences between college football and the NFL. In the pros, everybody is fast. And football as a profession demands much more time than the few-hours-a-day commitment that was built around college classes.

Another change from college to now: At Alabama, he never was part of a losing streak.

Waddle is proving to be a quick study with the Miami Dolphins; the rookie wide receiver not only leads the team in receptions with 22 through three games, but he also leads all first-year NFL players in that department. The previous time anyone had more catches in his first three games was 2003, when Anquan Boldin had 23 grabs in the opening trio of contests for Arizona.

“I think there is room for improvement,” Waddle said. “A lot of improvement, just all the way around, honestly.”

Such is the sentiment that was shared by many in the Dolphins’ complex on Wednesday.

Miami (1-2) has dropped two straight after a season-opening win in New England, the offense — even with Waddle catching just about everything thrown his way — is sputtering, and the Dolphins are back at home Sunday to face Indianapolis (0-3).

Waddle lost three games in college, total. This is a new challenge.

“I feel like we’re building, honestly,” Waddle said. “With us losing the game, I feel like we’ve learned a lot. We’re a young team. We’re just going to try to continue to get better.”

Waddle has Miami’s lone touchdown catch this season, has come up with the ball on all but four of the 26 times that he has been targeted with passes and had nearly as many catches in last weekend’s loss to Las Vegas alone— 12 — than any other Dolphins receiver has so far this season. DeVante Parker and Mike Gesicki both have 13 catches in 2021, tied for second most on the team.

Waddle also, really by no fault of his own, was part of a lowlight — the safety against the Raiders last weekend. He caught a pass in the Dolphins' end zone from quarterback Jacoby Brissett, turned and immediately was brought down for a safety that started a run of 25 unanswered points by Las Vegas.

It wasn't that Waddle did anything wrong; he even smiled about it all Wednesday, saying he wants the ball in any situation, no matter what.

“Look, he’s a young player,” Dolphins coach Brian Flores said of Waddle. “Every time he goes out there and sees a new defense, a different style of corner that plays maybe some off-technique or maybe some press. ... I think it’s a learning experience for him every week. I think he works, he’s got the right routine, he’s doing a lot of the right things, he’s asking the right questions. I think over time, if he continues to do what he’s been doing, he’ll be just fine.”

Waddle is tied for fifth in the NFL in total catches, but ranks just 47th so far in receiving yards (167) and a mere 126th in yards per catch (7.6). He’s picked up 91 yards after making those 22 catches, which is an area he points to as something that needs to improve.

College is over, but he’s clearly still learning.