Mistakes too much for Patriots to overcome in 18-12 loss 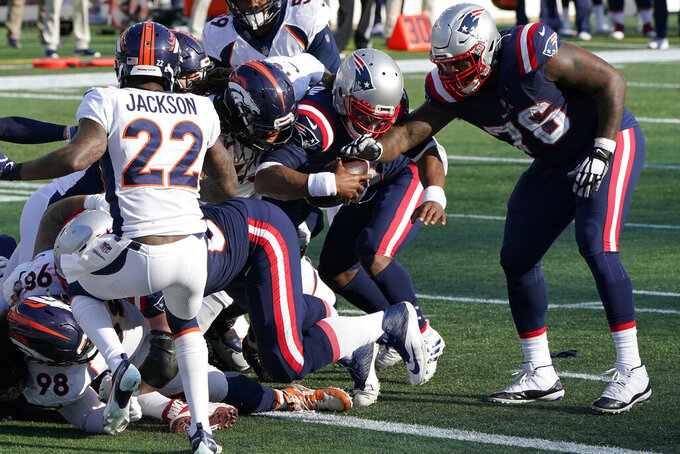 New England Patriots quarterback Cam Newton, center, bulls his way to the goal line and a touchdown in the second half of an NFL football game against the Denver Broncos, Sunday, Oct. 18, 2020, in Foxborough, Mass. (AP Photo/Steven Senne)

FOXBOROUGH, Mass. (AP) — The Patriots expected to have rust coming off a long layoff and with a minimal amount of practice time after becoming the latest NFL team to deal with a coronavirus outbreak.

They didn't count on the myriad of mistakes they had in Sunday's 18-12 loss to Denver that has now left them with a losing record through five games for the first time since 2001.

New England had a 13-day layoff between games after seven players went on the reserve/COVID-19 list, including quarterback Cam Newton and reigning Defensive Player of the Year Stephon Gilmore.

Both returned to the lineup Sunday, but the team was still short-handed after right guard Shaq Mason, defensive lineman Derek Rivers both were added to the list on Saturday, as was running back Sony Michel, who was already on injured reserve with a leg injury. Those moves came a day after center James Ferentz was added to the COVID-19 list, prompting the team to cancel practice Friday and close its facility.

“Some stuff you can’t control, and it is out of your hands sometimes," Gilmore said. "At the end of the day we are professional football players and we have to be able to go there and compete and not make excuses and lay it out all on the line for your teammates.”

The result was sluggish play on both sides of the ball Sunday. Denver was held out of the end zone, but scored on each of its first six drives of the game and led 18-3 at the half.

Newton said he thinks the lack of practice time was a factor, but wasn't something they couldn't have overcome.

“We’re expected to do our job and play at a high level and we didn’t do that today,” he said. “Anytime you turn the ball over that many times, the success rate is extremely low. But yet we still that opportunity to win and we just got to find ways to do that.”

The Patriots opened their first possession of the game with five straight runs before Newton had a screen pass attempt to James White deflected by defensive end Shelby Harris and intercepted by defensive lineman DeShawn Williams. It was Harris’ 11th tipped pass since 2019, which leads all NFL defensive linemen.

New England drove to the Denver 19 late in the second quarter on its third possession of the game. But that drive was upended when Joe Thuney snapped the ball over Newton’s head for a loss of 15 yards. The Patriots had to settle for Nick Folk's 41-yard field goal.

It was 12-3 in the third quarter when Denver was facing a third-and-6 on the New England 8. Gilmore got caught behind Tim Patrick and was called for defensive holding in the end zone. It gave the Broncos a fresh set of downs and eventually ended in McManus' 20-yard field goal.

It was New England's only penalty for the game.

Then in the third quarter, tight end Ryan Izzo had a costly fumble following a catch in Broncos' territory that set up McManus' 54-yard field goal.

Newton's touchdown run and another field goal by Folk got the Patriots within a touchdown in the closing minutes. But Newton's rushed pass attempt on fourth down to receiver N'Keal Harry ended up well wide and clinched Denver's victory.

“I knew I was going to get hit. So I just tried to find a spot to give him, so he could make a play on it,” Newton said.

Despite the miscues, he said there’s no time to panic going forward.

And like Gilmore, he said he's not going to dwell on his bout with coronavirus or use it as an excuse for what went wrong Sunday.

“Obviously everybody knows what the situation was and it is what it is and I just know for me here moving forward I just got to play better football and that’s what I’m going to try to do,” he said.