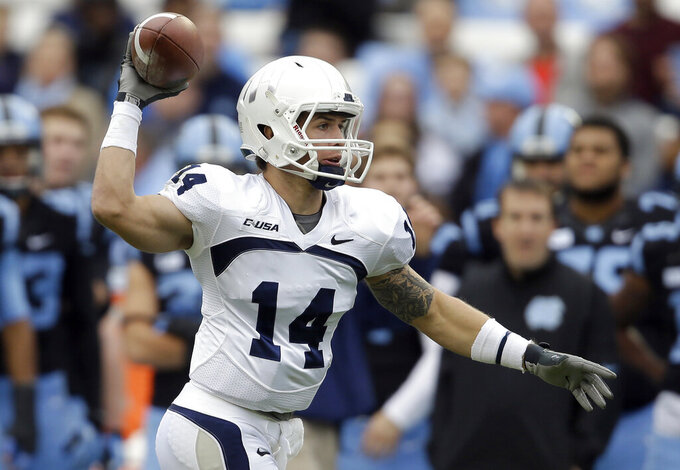 FILE - In this Nov. 23, 2013, file photo, Old Dominion quarterback Taylor Heinicke (14) looks to pass against North Carolina during the first half of an NCAA college football game in Chapel Hill, N.C. Taylor Heinicke was taking advanced math classes online at Old Dominion University when Washington called him to be "quarantine quarterback." Until a relief appearance Sunday, Dec. 27, 2020, he hadn't played an NFL game since 2018 and was an XFL backup, and now Heinicke could start or be one Alex Smith injury away in the season finale at Philadelphia with the NFC East on the line. (AP Photo/Gerry Broome, Filr)

Taylor Heinicke had math, not football, on his mind this fall.

Heinicke was back in school online at Old Dominion University, six years after he finished his college career as the school's most accomplished quarterback with four NFL organizations and an XFL backup stint in his rearview mirror.

Then, he got a call in early December to be Washington's “quarantine quarterback" and less than three weeks after joining the practice squad was on the field for his first NFL action since 2018.

Now, Heinicke is taking first-team snaps at practice in case Alex Smith isn't ready and could get just his second pro start Sunday night at Philadelphia with the NFC East title at stake.

There's no equation that explains any of this.

“I was prepared for this moment, and it’s fortunate that it happened,” Heinicke said. “It’s been a bizarre month or two, but I wouldn’t ask for anything different."

Different certainly describes Heinicke's journey from small-school college star to NFL bouncy ball with stops in Minnesota, New England, Houston and Carolina before planning for life after the sport. The 27-year-old who went from engineering to a math major got through final exams with “A” and “B” grades in two of his classes and asked to put the other two on hold until after the season.

“I had to email them, tell them the whole situation, ask if I could take it after the season and they were pretty nice about it,” he said. “Thankful for that — that I didn’t have to do a whole semester of work for nothing.”

ODU math department chair Gordon Melrose said Heinicke was treated like any other student who had something come up and needed to postpone a final or two.

“It’s somewhat unique to get incompletes because he had to join the football team,” said Melrose, who taught Heinicke Calculus III several years ago. “He can make them up whenever Washington’s finished with the season. It’s good that an ODU player is making it right now in the NFL, and I hope he does well on Sunday.”

He's not alone among those with ties to Old Dominion cheering for Heinicke's success. Indianapolis Colts wide receiver Zach Pascal, a sophomore there when Heinicke threw for 3,476 yards as a senior in 2016, said by phone Wednesday: “Oh I’m rooting for him all the way. Go Washington!"

“He can really play," Pascal said. “He’s a great quarterback. He can really dice you up. He’s a competitor, and I know he’s going to do his best to go out there and win.”

Heinicke lost his only previous start two seasons ago for Carolina, under Ron Rivera, Washington's first-year coach who dialed him up because of his familiarity with offensive coordinator Scott Turner. But he impressed Rivera and Turner by going 12 of 19 for 137 yards and a touchdown pass in relief of since-cut 2019 first-round pick Dwayne Haskins in a loss to the Panthers last week.

“He did a nice job of kind of seeing some open holes, pushing the ball down the field a little bit,” Turner said. “The good thing was the ball came out on time. When he had the ability to extend some plays, he did that and we moved the ball.”

Brian Scott was watching and saw the same quarterback he remembers coaching as the offensive coordinator at Old Dominion. Heinicke called out changes at the line of scrimmage, completed short passes and took a few shots, including a 29-yard touchdown pass to J.D. McKissic.

“The way he came in the game and played, you could tell he knew this offense,” McKissic said. “You could tell that he understands the system. He’s a confident guy.”

Scott, now an assistant at Towson, texted Heinicke after the game with a three-word message: “You're not done.”

“He’s still got football left in him,” Scott said. “Frustrating to see sometimes you’re looking at other guys in the NFL and you’re going, ‘Man, this kid, he’s better than him.’ But I get it. It’s how the business works. Sometimes you never know when your opportunity’s going to come knocking. So proud. When he goes in, so proud of him.”

Heinicke was proud of how Washington played in the fourth quarter, getting down the field with minimal mistakes. Six years since they last played together, Pascal could still remember Heinicke changing the play call and running something different “because he was that advanced and that smart when it came to football."

That was on display like he never stepped away from the game.

"To having limited reps since he’s been there and to go out and play the way he did, I thought was really impressive, " said Smith, Washington's starter who has missed the past two games with a strained right calf. “You could see a lot of that playmaking ability out there.”

Even if Smith is able to return, which would give Washington an experienced hand at the controls to return to the playoffs, Heinicke would be one injury away from the biggest spotlight of his career. Rivera didn't hesitate when asked if he thought Heinicke could handle it, which adds up given his experience.

“The nice thing about it is Taylor’s been in the system before,” Rivera said. "Taylor knew what to do. We just feel that giving him an opportunity to do a little more things will help him if he gets the opportunity to be the guy on Sunday.”