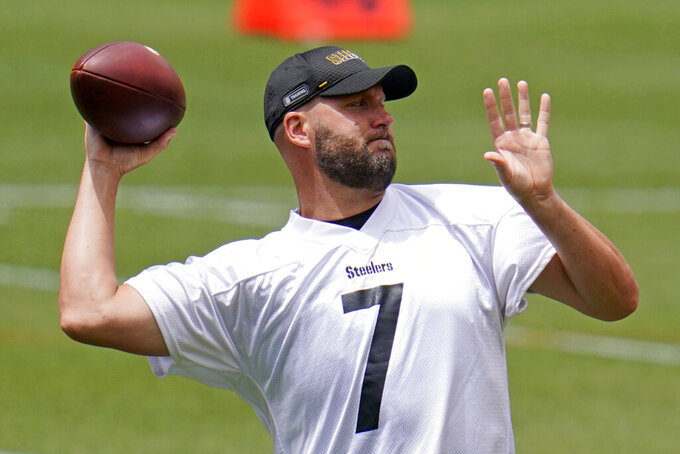 First-year offensive coordinator Matt Canada intends to build off the strengths of the two-time Super Bowl winner, while also placing a renewed emphasis on a run game that is expected to feature rookie Najee Harris after finishing last in the NFL in 2020.

“I think in football, it is 11 men doing their job, but the quarterback is their focal point,” Canada said Tuesday during the team’s first day of minicamp. “We are going to do what Ben wants to do and how Ben wants to do it. Our job is putting every player in a position to make plays.”

The Steelers promoted Canada after Randy Fichtner’s contract wasn’t renewed following a first-round playoff loss to Cleveland. The Steelers started 11-0 in 2020 en route to a 12-4 record and the AFC North title. But they stumbled down the stretch, with losses in five of their final six games.

Canada, who was the quarterbacks coach last season, spoke publicly for the first time since his January promotion.

“We tried every week to do the best we could as a staff and it didn’t work out the way we wanted it to at the end of the year,” he said. “This year, we are focused on putting our players in position to make plays and doing what they do best.”

Canada was hired before the 2020 season to help develop a relationship with Roethlisberger and mentor young backups Mason Rudolph and Josh Dobbs.

Now, the Steelers expect him to inject some life into an offense that sputtered down the stretch.

In 2016, Canada served as the offensive coordinator for the Pitt Panthers — who share a training facility with the Steelers — and he oversaw a dynamic attack that led him to being a finalist for the Broyles Award as the nation’s top assistant in college football.

Canada has two decades of experience as a quarterbacks coach and offensive coordinator in the college ranks, including recent stops at LSU and Maryland. He directed a Terrapins’ offense that put up more than 30 points seven times and was thrust into the role of interim head coach in 2018 when D.J. Durkin was suspended and ultimately fired in the aftermath of the death of offensive lineman Jordan McNair.

Canada is a believer of dictating and changing tempo in his offense. The Steelers implemented some jet sweeps and pre-snap motions early last season, a staple throughout Canada’s college coaching career, and he believes the 39-year-old Roethlisberger can run a similar up-tempo offense.

“We would certainly continue to use tempo, and use the things that Ben is very good at to let the offense be the most productive it can possibly be,” Canada said. “There are changes with terminology and how we are calling things, which has been a challenge for Ben, but he has been great at learning it. I don’t have any concern about Ben doing anything we want him to do.”

Roethlisberger threw for 3,803 yards with 33 touchdowns and 10 interceptions in 15 games after missing almost all of 2019 with a right elbow injury. The Steelers' passing game ranked seventh in the AFC and 15th in the NFL, but the run game finished last in the NFL in 2020, allowing defenses to tee off on Pittsburgh’s short passing attack.

The ground game became an instant offseason focal point for the Steelers, as team president Art Rooney II, general manager Kevin Colbert and coach Mike Tomlin have all stressed the need to run the ball. The Steelers used their first four draft picks on offense, including Harris in the first round, and they expect the former Alabama standout to provide an immediate boost.

“Matchups are the key to football, and what Najee can do in a game at receiver is something we are very excited about," Canada said. “I think he's going to have a tremendous season and a tremendous career because of his skillset, his work ethic and his football intelligence.”

NOTES: The Steelers had full attendance during the first day of minicamp, with the exception of DE Stephon Tuitt, whose brother was killed in an auto accident last week. … Tomlin said there weren’t any “concerning” or “significant” injuries on Tuesday and declined to answer specific questions about Roethlisberger and WR JuJu Smith-Schuster, who left practice early. G David DeCastro also was in attendance but did not participate.