NFL At 100: the shadow of domestic violence over league 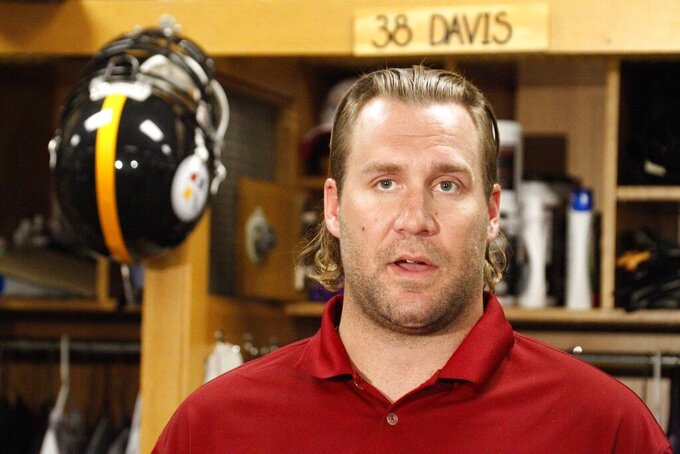 FILE - In this April 12, 2010, file photo, Pittsburgh Steelers quarterback Ben Roethlisberger reads a statement in the team's locker room in Pittsburgh. Roethlisberger was suspended six games in 2010 after he was accused of sexually assaulting a Georgia college student following a night of drinking in a Georgia bar earlier that year. He was not charged by Georgia authorities. NFL Commissioner Roger Goodell later cut the suspension to four games. (AP Photo/Gene J. Puskar, File)

The NFL got tougher on players charged with domestic violence after mishandling Ray Rice's case five years ago.

U.S. Sen. Richard Blumenthal blistered the NFL on Thursday, demanding an even tougher stance on players charged with domestic violence while sharing a letter he sent to NFL Commissioner Roger Goodell.

"The NFL has failed to lead on the issue of domestic violence & sexual assault by its players. These heinous crimes must be taken more seriously with greater oversight & accountability. As the regular season starts, I'm demanding Commissioner Goodell take stronger action," Blumenthal wrote on Twitter.

The league was sharply criticized for being inconsistent with punishments before Goodell implemented a policy of six-game suspensions for players found to have committed abusive acts against a spouse or partner. His action followed public outcry over Rice initially receiving a two-game suspension that turned into an indefinite suspension after video emerged of him knocking his now-wife unconscious.

In issuing discipline, the league must conform to the collective bargaining agreement, which gives players certain protections through their union. But the agreement grants Goodell ultimate authority to issue punishment and that's been a major point of contention for the NFL Players Association.

Here are some of the most notable domestic violence cases in NFL history:

Goodell suspended Rice for two games in 2014 after he was charged with third-degree aggravated assault for hitting his then-fiancee in an elevator in Atlantic City. The couple married a month later. After a video showing Rice knocking her unconscious and dragging her from the elevator came out, the Baltimore Ravens released the three-time Pro Bowl player and the league suspended him indefinitely.

Rice pleaded not guilty to aggravated assault and applied to a program for first-time offenders. A neutral arbitrator vacated Rice's suspension two months after he was banned, but he hasn't played again.

Carolina Panthers defensive end Greg Hardy was convicted in July 2014 of assaulting and threatening a woman who contended the 6-foot-4, 275-pound player threw her in a bathtub and onto a sofa covered with guns before threatening to kill her. He appealed the ruling and was allowed to play the first game of the season before the Panthers placed him on the exempt list. He reportedly reached a settlement with the woman and she could not be located in order to testify, so the domestic violence charges were dismissed and expunged from Hardy's record.

Hardy didn't play the rest of the season but signed an incentive-laden, $13.1 million deal with the Cowboys and played 12 games in 2015 after serving a four-game suspension. He hasn't played since and is currently a mixed martial arts fighter.

Dallas Cowboys running back Ezekiel Elliott was suspended six games by Goodell in August 2017 after the league concluded following a yearlong investigation that he had several physical confrontations in the summer of 2016 with his girlfriend at the time. Prosecutors in Ohio didn't pursue the case, citing conflicting evidence. Elliott denied the allegations under oath during his NFL appeal. The suspension prompted weeks of court hearings in three states resulting in three legal reprieves that kept Elliott on the field before he eventually dropped the appeal.

In March, the league suspended Cleveland Browns running back Kareem Hunt for eight games for two "physical altercations," one in which Hunt shoved and kicked a woman in a hotel hallway while he played for Kansas City. Hunt was cut by the Chiefs during a Super Bowl push last season after video emerged of the incident involving the woman. The league was criticized for not disciplining Hunt until the jarring video was released.

The San Francisco 49ers released linebacker Reuben Foster following a domestic violence arrest last November. Washington claimed Foster off waivers and the team faced immediate criticism. Prosecutors in Florida decided in January not to pursue a case against Foster, dismissing the first-degree misdemeanor battery charge. The league fined him two game checks for the upcoming season but did not suspend him.

Ben Roethlisberger, the two-time Super Bowl champion Pittsburgh Steelers quarterback, was suspended six games in 2010 after he was accused of sexually assaulting a Georgia college student following a night of drinking in a bar earlier that year. He was not charged by Georgia authorities. Goodell later cut the suspension to four games.