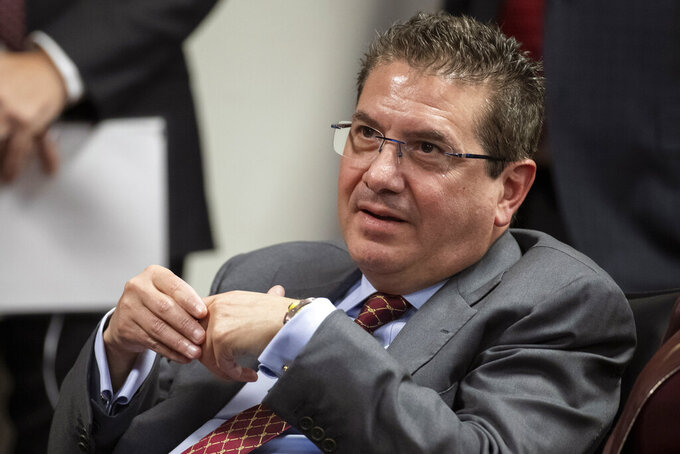 FILE - Washington Redskins owner Dan Snyder listening to head coach Ron Rivera during a news conference at the team's NFL football training facility, in Ashburn, Va., Jan. 2, 2020. The Washington Commanders are denying the contents of a report by ESPN detailing Dan Snyder's efforts to influence other NFL owners and the league office to keep control of the team. In a statement sent to The Associated Press on Thursday, Oct. 13, a Commanders spokesperson called it “categorically untrue” and “clearly part of a well-funded, two-year campaign to coerce the sale of the team, which will continue to be unsuccessful.” (AP Photo/Alex Brandon, File)

There isn’t expected to be any significant news on any of the hot topics when NFL owners meet in New York on Tuesday.

Snyder’s ownership of the Commanders became a big issue again last week when ESPN reported, citing anonymous sources, that he has hired private investigators and told people he has enough information to expose fellow owners and NFL Commissioner Roger Goodell.

The Commanders denied the contents of the report, calling it “categorically untrue” and “clearly part of a well-funded, two-year campaign to coerce the sale of the team, which will continue to be unsuccessful.”

Snyder’s status has been widely debated for years amid several scandals and investigations into workplace conduct in Washington. There are no plans to vote on Snyder’s ownership because the league’s investigation, conducted by attorney Mary Jo White, into allegations of sexual misconduct and financial impropriety is still ongoing.

However, it’s expected Snyder’s name will come up among owners.

Tanya Snyder, the team’s co-CEO, and Commanders President Jason Wright are scheduled to represent the team at the meetings, a person familiar with the plans told The Associated Press on Monday. The person, speaking on condition of anonymity because the conversations are private, said there has been no change to Dan Snyder’s status since the league announced in July 2021 that he would be turning over day-to-day operations to his wife.

The Commanders’ attorneys said last week Snyder “is no longer under any NFL restriction related to his involvement with the team.” The person familiar with the league’s thinking told the AP that Goodell will address the matter with Snyder once the league-commissioned investigation is completed. White hasn’t informed the league of a timeline to submit a report, though it’s anticipated she’s nearing the end of the investigation, the person said.

Snyder and the organization are also currently the subject of an ongoing investigation by the U.S. House Committee on Oversight and Reform.

Snyder has owned the team since 1999. Removing him would be unprecedented and requires 24 votes from the other owners.

Miami Dolphins owner Stephen Ross also won’t attend Tuesday’s meeting. His suspension for tampering with Tom Brady and Sean Payton was lifted on Monday, but he is not allowed to attend any league meetings prior next spring.

The NFL and NFL Players Association already revised their concussion protocol following a joint investigation into the procedures after Miami Dolphins quarterback Tua Tagovailoa suffered what was described as a back injury against the Buffalo Bills last month.

The league faced heavy criticism and scrutiny after Tagovailoa was carted off the field by stretcher just four days after stumbling off the field and being allowed to return to play.

A pair of disputed roughing-the-passer penalties in Week 5 frustrated defensive players and had players, coaches and fans questioning what constitutes a legal hit. But the league doesn’t plan to soften its interpretation of the rule and will continue to allow referees to err on the side of caution in order to protect quarterbacks.

Among the topics on the agenda for the meetings are updates on international play and preseason injury trends, including use of Guardian caps to prevent concussions.

The owners are also expected to vote on the $790 million St. Louis relocation settlement. Last November, the NFL and Los Angeles Rams owner Stan Kroenke agreed to pay $790 million to settle a lawsuit filed by St. Louis interests over the team’s relocation to Los Angeles. The vote would determine how much Kroenke pays and how much would be covered by owners of the league’s 31 other teams.