NFL teams use new rights to jockey for fans, revenue in UK 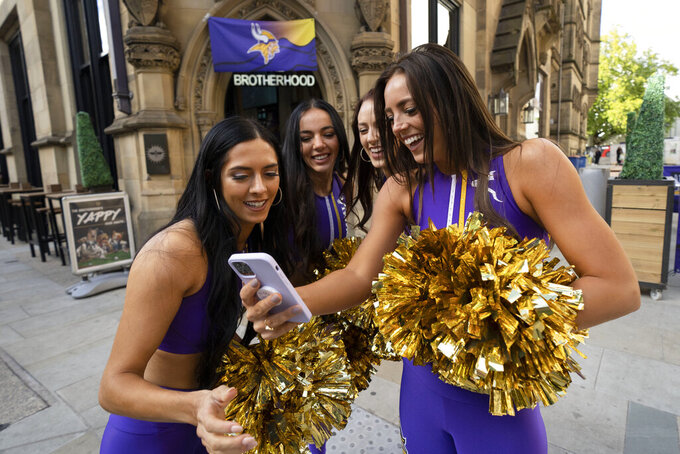 Cheerleaders for the The Minnesota Vikings check the footage after recording a TikTok video at a fan interaction event at The Brotherhood Of Pursuits And Pastimes sports bar in Manchester, England, Wednesday, Sept. 28, 2022. A half-dozen NFL teams are aggressively targeting fans in Britain now that they have new marketing rights in the country. They’re signing commercial deals and hiring local media personalities in bids to expand their fanbases and tap international revenue. (AP Photo/Jon Super)

Sebastian Randazzo is optimistic, though. The young Englishman who founded a Jets fan club said interest in the NFL is "absolutely booming."

“Hopefully we continue to see this grow with teams making their presence well-known in the U.K.,” he said Sunday. "It's great for us fans."

A half-dozen teams are aggressively targeting those fans after the NFL divvied up marketing rights in Britain. They're signing commercial deals and hiring local media personalities in bids to expand their fanbases and tap international revenue.

The Jacksonville Jaguars are Britain's unofficial home team — and are intent on preserving that status — but now they're facing competition.

They're not just focused on London, either. The Chicago Bears held youth clinics in eight cities — including in Wales and Scotland — this summer. The Minnesota Vikings sent their mascot and cheerleaders to Manchester ahead of their game against the New Orleans Saints on Sunday at Tottenham Hotspur Stadium.

The Jaguars, though, aim to keep their status as top dog. They hired an NFL executive to oversee a relaunch of their brand in Britain. The Jags have played a game in London nearly every year since 2013 and will face the Denver Broncos on Oct. 30 in the first game of a three-year deal with Wembley Stadium.

“There are other teams in the marketplace, but it’s clear that we are doing more, we are investing more ... both from a people standpoint and a monetary investment,” said Chad Johnson, the Jags' chief operating officer. “Just because they have the rights in the market, doesn’t mean they’ve committed to play football games here ... to multiple football games here.”

The jockeying has intensified in the buildup to three London games in October. It’s all a result of the NFL launching its international “home marketing area” program. Eighteen teams were awarded the rights — in various countries, eight in total — on five-year deals during which teams can sell sponsorships and merchandise, build their “global brands” and attract new fans.

The seven other countries are Australia, Brazil, Canada, China, Germany, Mexico and Spain. Some teams have rights in more than one country, like the Miami Dolphins with Brazil, Spain and the U.K. International expansion was one reason why the NFL added a 17th game to the schedule.

"These are under-tapped markets for us," said Alex Chang, chief marketing officer for the 49ers, who hold rights in the U.K. and Mexico. "Now that we have rights there, we can do so much more with it. We can grow that fanbase a lot more proactively. It’s really pure upside here, but we have to invest in order to get to that upside.”

Teams didn't disclose budgets or revenue projections, but Chang said the team has made a “sizeable investment” in the initiative.

The 49ers, who play in Mexico City on Nov. 21 against the Arizona Cardinals, are part-owners of Premier League soccer club Leeds and plan to hold their first official “watch party” with fans in the northern city during a game this month. They canceled an earlier one after the death of Queen Elizabeth II.

It’s difficult to gauge potential revenue, but sports economist Victor Matheson of the College of the Holy Cross in Massachusetts said it is instructive to consider the Premier League's success in the United States. The league signed a six-year deal with NBC worth more than $2 billion despite playing no regular-season games in the U.S.

“The NFL would be thrilled to make the same sort of inroads into the U.K. as the Premier League has made into the U.S.,” said Matheson, adding that the league looks abroad because it has “pretty much maxed out the U.S. market."

The Jags got approval in 2013 to do marketing in Britain, and the team raised the stakes with its new Wembley deal. That’s because the Jags — not the NFL — will be running the game, handling everything from catering to lucrative hospitality packages. For fans, it will look and feel like a true “home” game.

“We did take a chance,” said Maria Gigante, who left the NFL in January to become the Jags’ vice president of U.K. operations. “We slightly increased our ticket prices. We took on the execution of hospitality ... and exceeded our goals.”

Even with exchange-rate fluctuations, a Wembley game is “significantly more profitable” than a game in Jacksonville, said Johnson the chief operating officer.

The Jags have a history with Wembley, having played all but one of their eight London games there. Jags owner Shad Khan, who also owns Premier League club Fulham, even tried to buy the stadium from the English Football Association. The team is now spending money on capital improvements at Wembley.

There are conference calls with the NFL, and the teams collaborate on occasion, Gigante said, but it’s a competitive environment.

“For other teams, they are very much focused on global expansion and dipping their toes in the waters in different areas. For us, it’s about maximizing the opportunity in the U.K., it’s about being the U.K.’s team.”