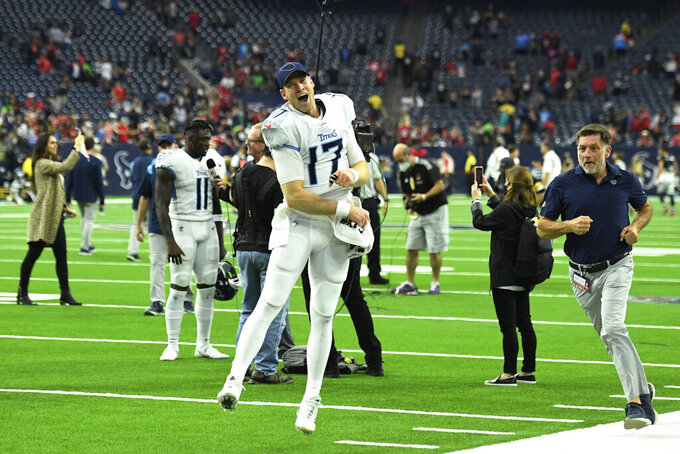 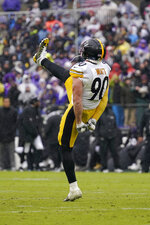 The wild-card round of the NFL playoffs begins next weekend with six games over three days.

— Ryan Tannehill, Titans, tied a career high with four touchdown passes to help Tennessee clinch the top seed in the AFC for the first time in 14 years with a 28-25 win at Houston.

— Tom Brady, Buccaneers, completed 29 of 37 passes for 326 yards and three touchdowns in Tampa Bay's 41-17 rout of Carolina and topped 5,000 yards passing for the second time in his career.

— Kirk Cousins, Vikings, passed for 172 yards and three touchdowns in the second half to lead Minnesota to a 31-17 comeback victory over Chicago.

— Russell Wilson, Seahawks, threw three touchdown passes as Seattle spoiled a shot at the NFC West title for Arizona by beating the Cardinals 38-30.

— Trevor Lawrence, Jaguars, had the best game of his rookie season, going 23 of 32 for 223 yards and two touchdowns to help Jacksonville to a 26-11 victory over Indianapolis.

— Davis Mills, Texans, threw for 301 yards and three touchdowns in Houston's 28-25 loss to Tennessee, setting a franchise record for yards passing by a rookie.

— Justin Herbert, Chargers, completed 34 of his 64 attempts for 383 yards with three touchdowns and one interception in Los Angeles' 35-32 overtime loss to Las Vegas.

— Rashaad Penny, Seahawks, had a career-best 190 yards and a touchdown on 23 carries in Seattle's 38-20 victory at Arizona.

— Antonio Gibson, Washington, ran for a career-high 146 yards, scored a touchdown and capped his first 1,000-yard rushing season with a 22-7 win over New York.

— Latavius Murray, Ravens, rushed for 150 yards and a touchdown on 16 carries in Baltimore's 16-13 overtime loss to Pittsburgh.

— Josh Jacobs, Raiders, ran for 132 yards on 26 carries, including one score, in Las Vegas' 35-32 overtime win over the Los Angeles Chargers.

— Cooper Kupp, Rams, became the fourth player in NFL history to lead the league in receptions, yards receiving and TD catches this season after finishing with seven receptions for 118 yards in Los Angeles’ 27-24 loss to San Francisco.

— Jaylen Waddle, Dolphins, had a touchdown grab and set the NFL record for receptions in a rookie year with 104, helping Miami top New England 33-24.

— Amon-Ra St. Brown, Lions, had eight catches for 109 yards and a touchdown in Detroit's 37-30 victory over Green Bay.

— Russell Gage, Falcons, had nine receptions for 126 yards and a TD in a losing cause as Atlanta lost to New Orleans 30-20.

— Chris Boswell, Steelers, made a 36-yard field goal with 1:56 remaining in overtime to win the game for Pittsburgh 16-13 at Baltimore.

— Robbie Gould, 49ers, booted a 24-yard field goal with 2:45 left in overtime to help lead San Francisco to a 27-24 win over the Los Angeles Rams. Gould also took over the punting duties when punter Mitch Wishnowsky was sidelined in the first half.

— Bobby McCain, Washington, returned the first of his two interceptions 30 yards for a touchdown in a 22-7 win over the New York Giants.

— Patrick Peterson, Vikings, had a 66-yard interception return for a touchdown in Minnesota's 31-17 victory over Chicago.

— Xavien Howard and Sam Eguaoven, Dolphins. Howard returned an interception 37 yards for a touchdown, and Eguaoven was credited with recovering a fumble that became a game-ending TD in Miami's 33-24 win over New England.

— Trayvon Henderson, Bengals, scooped up a fumble and ran 29 yards for a TD in Cincinnati's 21-16 loss at Cleveland.

Tampa Bay's Tom Brady finished the regular season with a career-high 5,316 yards passing, joining Drew Brees as the only players to have 5,000 in multiple seasons. Brady's 485 completions surpassed Brees' record of 471 set in 2016. ... Buccaneers wide receiver Mike Evans became the first player with at least 1,000 yards receiving in each of his first eight seasons. ... Bucs tight end Rob Gronkowski had his 32nd career game with at least 100 yards receiving, breaking a tie with Tony Gonzalez for the most in NFL history at the position. ... Green Bay's Aaron Rodgers finished the regular season with 4,115 yards passing, becoming the sixth player to get at least 4,000 in 10 seasons. He joined Peyton Manning (14), Brady (13), Brees (12), Philip Rivers (12) and Matt Ryan (10). ... Seattle's Russell Wilson won his 113th game, including the postseason, to pass Manning (112) for the most in a quarterback's first 10 seasons. He also joined Manning as the only players with 3,000 yards passing in each of his first 10 seasons. ... Los Angeles Rams wide receiver Cooper Kupp is the fourth player since 1970 to lead the NFL in receptions, yards receiving and TD catches, joining Jerry Rice (1990), Sterling Sharpe (1992) and Steve Smith Sr. (2005). Kupp's 1,947 yards receiving are second most in a season, trailing only Calvin Johnson (1,964). His 145 catches trail only Michael Thomas (149 in 2019) for the most in NFL history. ... Pittsburgh linebacker T.J. Watt had a sack against Baltimore to give him 22 1/2 for the season, tying him with Michael Strahan for the most in NFL history. ... Miami's Jaylen Waddle had 104 receptions to surpass Anquan Boldin's mark of 101 by a rookie, set in 2003. ... Houston Davis Mills threw for 301 yards and three touchdowns in a 28-25 loss to Tennessee to give him 2,604 yards passing this season, moving past David Carr (2,592) for the most yards passing by a rookie in franchise history.

With the Dolphins' 33-24 victory over the Patriots, Miami became only the second team to win both of its AFC East meetings against New England in the past 21 years. Buffalo did it in 2020; before that, Miami and the New York Jets both did it in 2000. ... The Bills limited the Jets to a franchise-low 53 yards of total offense and four first downs — the fewest allowed by Buffalo in franchise history — in a 27-10 win. Buffalo also sacked Jets rookie Zach Wilson nine times, the most by Buffalo since getting 10 in a 23-0 win over Washington on Oct. 20, 2011. ... Chicago went on fourth down six times, with only one conversion in the Bears' 31-17 loss at Minnesota.

Seven of the 14 teams to qualify for the playoffs missed the postseason a year ago: Arizona, Cincinnati, Dallas, Las Vegas, New England, Philadelphia and San Francisco. ... Tennessee won the AFC's top seed for the first time since 2008. ... Green Bay will have home-field advantage throughout the NFC playoffs after winning the conference's No. 1 seed.

The Denver Broncos are looking for a new head coach to lead them out of a six-year playoff drought and a half decade of losing seasons that marks the most protracted plunge by a Super Bowl champion in NFL history. The Broncos fired Vic Fangio after he went 19-30 over three years, including 7-10 this season despite having one of the easiest schedules and the highest-paid defense in the league.

Seattle Seahawks Pro Bowl safety Quandre Diggs was carted off the field with a broken right leg and dislocated ankle at Arizona. Diggs appeared to slip on the grass just before being blocked early in the fourth quarter and immediately grabbed his knee. He was in tears as he was carted off. ... New Orleans Saints quarterback Taysom Hill left against Atlanta with a left foot injury and didn’t return. ... San Francisco 49ers punter Mitch Wishnowsky was sidelined in the first half at the Los Angeles Rams by a concussion, forcing placekicker Robbie Gould to punt.

“Never expect to be sitting here having this moment right now, not like this.” — Indianapolis coach Frank Reich after the Colts were defeated by Jacksonville 26-11 and were eliminated from playoff contention.

“These things don’t happen too often. We’ve got guys in the locker room who have never been a one seed and been in the league 10-plus years. We’ve definitely got to relish in this moment and understand that this is big time.” — Tennessee safety Kevin Byard after the Titans win 28-25 at Houston to clinch the No. 1 seed in the AFC for the first time since 2008.