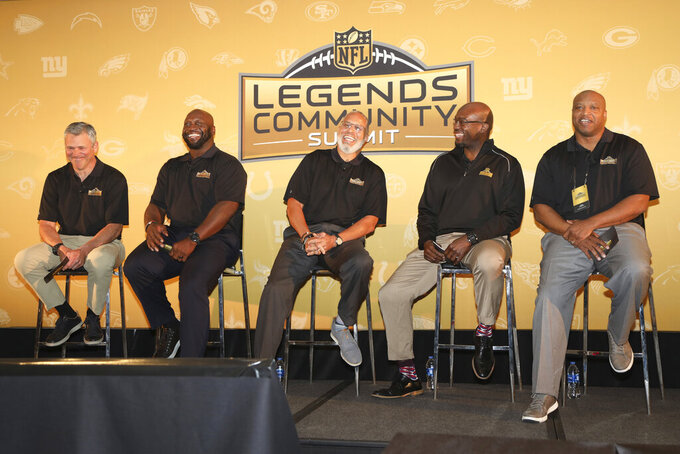 From left: Mark Brunell, John Randle, Ed Reynolds, Will Shields and Mack Strong smile during the 2019 NFL Legends Community Summit in Ft. Lauderdale, Fla., Monday, April 1, 2019. Randle, the dynamic defensive lineman for Minnesota and Seattle over 14 seasons _ is a director for the NFL Legends Community. The organization, launched six years ago, "celebrates, embraces and connects players with each other, their teams and the league," and recently hit 10,000 members.(James McEntee/AP Images for NFL)

John Randle did enough great things on the football field to be inducted into the Pro Football Hall of Fame.

He's now being rewarded after his playing career not only with such accolades, but simply by being able to help others. Specifically, former NFL players.

Randle, the dynamic defensive lineman for Minnesota and Seattle over 14 seasons — he smiled at opponents while wrecking offenses — is a director for the NFL Legends Community. The organization launched six years ago "celebrates, embraces and connects players with each other, their teams and the league" and recently hit 10,000 members.

For so many former pro athletes, making the transition to the next phase in life can be extremely difficult. Randle believes Legends provides an essential ingredient for that transition.

"One of the biggest things is that options we can offer to each other, and also the brotherhood," he says. "When guys retire, you wonder what the next step is for you in your life. Some guys have money and some don't; some have families and some don't. They are not sure what they want to do or how to get started.

"I was talking to a guy who wanted to get involved as a high school football coach. I introduced him to some people I know in the Minnesota community, and that is a courtesy I can do. I can connect people. Being a resource for guys who don't have the info to cross the bridge, that is very fulfilling."

Like the Trust, which came out of the 2011 labor agreement, the Legends Community is run by the NFL Players Association and provides a multitude of resources for former players. It organizes gatherings on the local and national levels, which can range from community outreach programs to draft day parties to golf tournaments.

Each year, a former player will announce at least one draft selection by his former team, for instance. That affords many of them the opportunity to get together and basically talk shop — whether it's about their NFL careers or their current status.

"When guys retire from football, and you look back at what you did, one of the biggest things we talk about is the camaraderie in the locker room," Randle says. "When you're done playing, guys are trying to find ways to have that camaraderie; that is what the Legends Community offers to guys.

"I've had so many conversations with guys who want to go back to what we talked about 10 years ago or what happened way back. Those wonderful moments you have been a part of. We were playing a game so many people wish they could have played ... to sit around and talk about stuff that impacted your life and stuff you can't share with just anybody, that is special."

Tracy Perlman, the NFL's senior vice president of football communications and marketing, sees the Legends Community as an umbrella over all the programs out there for retired players. Other organizations — the NFLPA with the Trust, the NFL Player Care Foundation, the NFL Alumni Association — fall under that umbrella. Those groups often partner together for events.

There are player care experts who work with players in dire need, perhaps aiding them to find grants for entrepreneurship, or helping with total wellness. Therapy sessions are available at no cost. Vocational opportunities, too.

"We can get you hooked up with a case manager and start to help you through whatever that struggle is," Perlman says. "The Legends provide a communications mechanism through every single group that wants to give players opportunities.

"You're talking about some guys who are in their 30s and some in their 80s, so you hear different things from them across the board. A lot of what we hear is, `I need transition assistance.' So we built a program with player engagement we call Bridge to Success, to help make that transition. Perhaps they want to find a path into coaching. When you decide it is over, you feel there is a way to transition to a life after football with the same passion you had for the game."

That can be a slope as slippery as Lambeau Field in December. NFL players — and all professional athletes, really — grow accustomed to being treated differently than the public. Then, they become, well, ordinary people, albeit with a personal backstory most folks can't relate to.

"Sometimes they see the bridge but they are not sure that is the bridge they want to take," Randle says. "Some have all the assets in the world but don't know what they want to do. Maybe they are bored. We want to get them involved in something, maybe a charity, or coaching, or going overseas to get involved with a sport.

"The words resources and bridge are used, to me it is about brotherhood. When I run into a player and he tells me what the Legends Community has done for him and his family, that is the biggest part for me. To see guys who have had success on the field, but to see them have major success off the field, is very rewarding."

Randle hopes every former NFL player joins. Perlman notes that the Legends Community is beginning to work with high school and college players through clinics and drills and one-on-one mentoring.