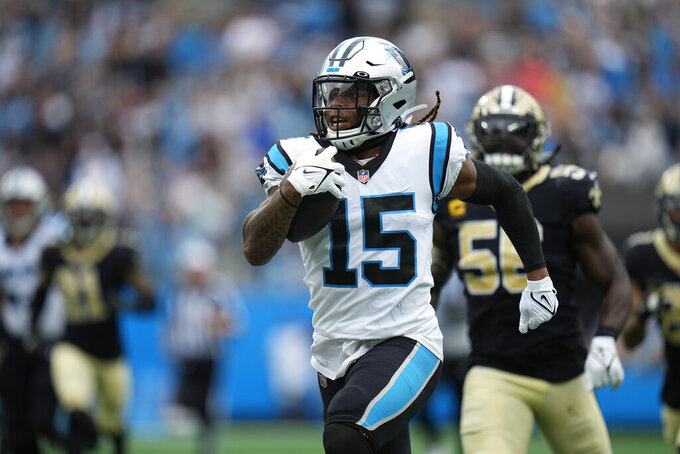 Carolina Panthers wide receiver Laviska Shenault Jr. (15) runs the ball down the field for 67 yards during the second half of an NFL football game against the New Orleans Saints, Sunday, Sept. 25, 2022, in Charlotte, N.C. (AP Photo/Rusty Jones)

CHARLOTTE, N.C. (AP) — Laviska Shenault was frustrated over being declared inactive for his first two games with the Carolina Panthers after being acquired in a late preseason trade from the Jacksonville Jaguars.

But the third-year wide receiver took advantage of his first chance to play on Sunday in a big way.

Shenault caught a momentum-changing 67-yard touchdown pass from Baker Mayfield in the fourth quarter, Marquis Haynes returned a fumble 44 yards for a touchdown and the Panthers defeated the New Orleans Saints 22-14 to snap a nine-game losing streak.

“Knowing what I can bring to the table, it's hard not being able to do what you love to do,” said Shenault, held out of the first two games while learning the playbook. “I bring a lot of skill to the team and when I'm able to be free and go play, that's what you're gonna get.”

While Mayfield just arrived in Carolina this year, he said ending the losing streak, “is a weight lifted off your shoulders.”

Jameis Winston, playing with an injured back, completed 25 of 41 passes for 353 yards with a touchdown and two interceptions, while rookie Chris Olave had nine catches for 147 yards for a Saints wide receiver corps that lost Michael Thomas, Jarvis Landry and Tre’Quan Smith to injuries in the second half.

“I just think we’ve got to be better early on in the game," Saints coach Dennis Allen said. “We’ve got to execute better. Certainly that starts with us as a coaching staff. We’ve got to put a good plan together and give our guys a chance to be successful.”

Carolina's defense held Winston and the Saints scoreless for three quarters before Mark Ingram cut the lead to 13-7 with a 5-yard TD run early in the fourth.

But on the second play of the ensuing series, Shenault caught a pass in the flat, juked a defender and raced along the left sideline for a touchdown to give the Panthers some cushion with 12:06 left.

“I saw green,” Shenault said. “I saw an opportunity that had to be snatched away by me. It felt so good.”

Carolina's defense took it from there, intercepting Winston twice in the fourth quarter to put the game away.

Cornerback Jaycee Horn got a hand on Winston's pass on a blitz and 320-pound defensive tackle Derrick Brown reached out to grab the ball with one hand for the interception, setting up Eddy Pineiro's third field goal to give Carolina a 22-7 lead. Winston answered with a 4-yard TD pass to Marquez Callaway, but Horn intercepted Winston on a desperation Hail Mary at midfield as time expired.

Winston fell to 4-7 against the Panthers during his career, with 18 interceptions and 10 touchdown passes.

Defensive end Cameron Jordan said the Saints have to be better against the run if they want to get back on the winning track.

The Saints (1-2) committed three turnovers in all and were flagged seven times for 58 yards. Wil Lutz missed one field goal and had another blocked as part of the parade of errors.

The Panthers entered Week 3 as the only NFL team without a takeaway.

But they got a big one early as Frankie Luvu reached his arm in and ripped the ball away from Alvin Kamara at the line of scrimmage. Haynes picked up the loose ball and rambled 44 yards for a touchdown with an entourage by his side.

“It unleashed the spirit of the defense,” Panthers coach Matt Rhule said.

Luvu said it felt great to get a turnover after he dropped a potential Pick-6 in a 19-16 loss to the New York Giants last week.

“I knew I messed it up the last time and I owe to the guys, and hopefully they are good with that," Luvu said.

Saints: The wide receiver position was decimated by injuries in the second half with Landry (ankle), Thomas (toe) and Smith (concussion) all leaving the game. Smith had 105 yards receiving on four catches before exiting. ... LG Andrus Peat left early with a concussion.

Saints: Play the Vikings on Sunday in London.

Panthers: Host the Cardinals on Sunday.