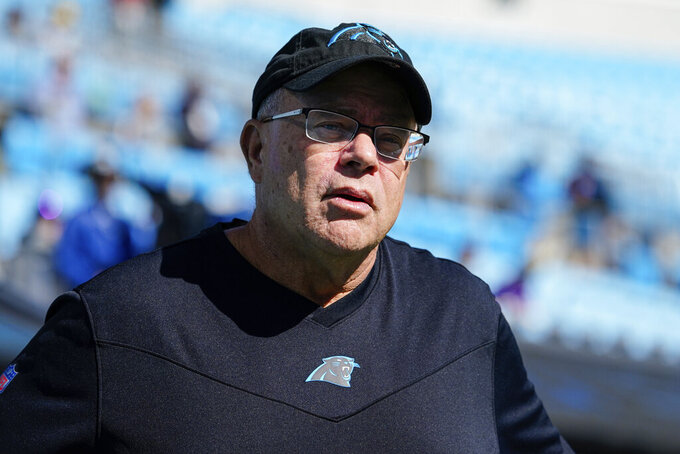 FILE - Carolina Panthers team owner David Tepper looks on before an NFL football game against the Minnesota Vikings, Sunday, Oct. 17, 2021, in Charlotte, N.C. Tepper threw his support behind struggling head coach Matt Rhule on Wednesday, April 27, 2022, saying it takes patience and time to build a winning foundation in the NFL. Rhule is 10-23 in his two seasons with the Panthers.(AP Photo/Jacob Kupferman, File)

Rhule is 10-23 in his two seasons with the Panthers. Only the Lions, Texans, Jets and Jaguars have won fewer games than Carolina since Rhule’s arrival in 2020.

“Look, I believe in Matt and he has my full support,” Tepper said during a 30-minute videoconference with reporters on Wednesday.

Rhule is entering the third year of a seven-year, $62 million contract.

When asked if the success of the upcoming season will impact Rhule's long-term future, Tepper replied, “This is a new season. ... There is a saying that what was then is then, and what is now is now. And we're in the now, not in the then.”

Tepper's overriding message was one of patience, stressing that “Rome wasn't built in a day, and neither is this team.”

He still feels as if the Panthers have some strong pieces to build around on the roster.

Tepper admitted that developing patience has been difficult for him.

The Panthers are 22-43 since he bought the team in 2018 from founder Jerry Richardson for a record $2.275 billion. Only once in the past four seasons have the Panthers won more than five games. Carolina has not been to the playoffs since Tepper took over.

“I have new appreciation for how stupid I am sometimes, quite frankly,” Tepper said. "I shouldn't say that and people afterward are going to say, ‘why did you say that?’ But listen, it is hard, and I have a certain amount of humility in this respect.”

“That brings a lot more experience than the old staff,” Tepper said. “That's a wealth of experience.”

The biggest hurdle for Tepper and the Panthers has been finding consistency at the quarterback position.

Darnold and P.J. Walker are the only QBs currently on the roster. Tepper said he still views Darnold as a good quarterback, but said the team is “always looking” to improve.

The Panthers have the sixth pick in the NFL draft on Thursday night and are likely to have their choice of Pittsburgh's Kenny Pickett, Liberty's Malik Willis or Mississippi's Matt Corral if they choose to take a quarterback.

Panthers general manager Scott Fitterer said Tuesday the team is “comfortable” drafting a quarterback even though this is not generally considered a strong QB class with no true standout at that position.

Tepper declined to discuss a number of other pertinent topics, including the team’s unsuccessful pursuit of controversial quarterback Deshaun Watson.

He also refused to discuss the ongoing saga with the halted construction of the team’s half-built practice facility/headquarters in Rock Hill, South Carolina, saying he’s honoring the wishes of city officials there by not participating in back-and-forth conversations in the media. He reiterated he’s willing to sit down and talk with City of Rock Hill officials about funding for the $800 million project.