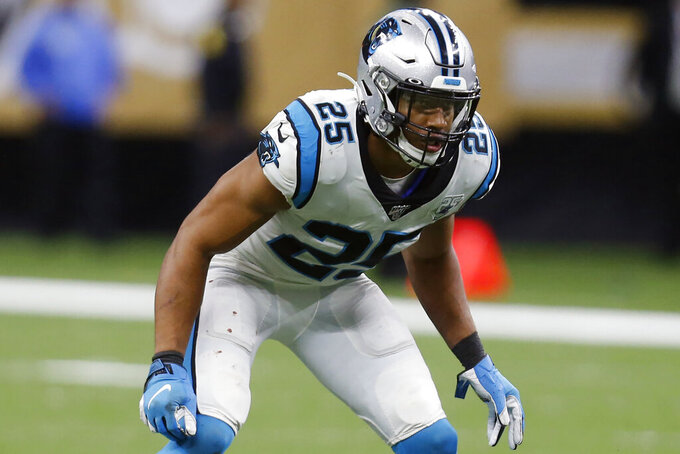 FILE - In this Nov. 24, 2019, file photo, Carolina Panthers strong safety Eric Reid (25) waits for a play during the second half at an NFL football game against the New Orleans Saints, in New Orleans. The Panthers have released Eric Reid just 13 months after giving the veteran safety a three-year, $22 million contract extension. (AP Photo/Butch Dill, File)

Panthers general manager Marty Hurney signed Reid to a new deal in February 2019 that included a $9 million signing bonus. The decision to release Reid means the Panthers will be on the hook for $5 million in dead money.

“It’s been a pleasure Carolina!” Reid said on Twitter. “I enjoyed my time and the support I received from the fans, media, teammates, and staff there will be remembered. Looking forward to furthering my career in another city!”

The Panthers have other options at safety.

The team re-signed safety Tre Boston to a three-year, $18 million contract on Tuesday. They also agreed to terms with free agent safety Juston Burris from the Browns earlier this week.

The 28-year-old Reid started 29 games over the past two seasons for the Panthers and had 201 tackles, five sacks and one interception.

Reid was the first player to join former teammate Colin Kaepernick's protest against social injustice by kneeling during the national anthem. He has also been an outspoken voice in the players' union, recently advocating against the new labor contract that players voted to ratify.

The Panthers confirmed a trade that was reported two weeks ago that sent five-time Pro Bowl guard Trai Turner to the Chargers in exchange for two-time Pro Bowl left tackle Russell Okung.

The Panthers are parting ways with Cam Newton and have agreed to terms on a three-year deal with quarterback Teddy Bridgewater.