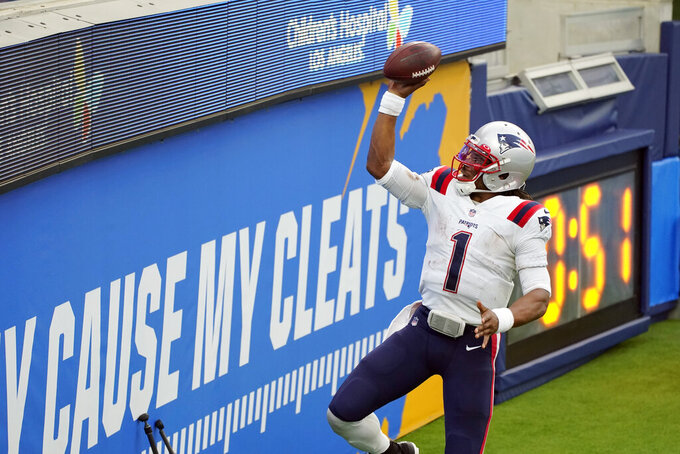 The Patriots did what they needed to do in the first part of their two-game West Coast road trip, routing the Chargers 45-0 on Sunday.

Winners of four of its past five, New England (6-6) is back at .500 for the first time since Week 4 and still in the playoff hunt. But it still has little margin for error as it jumps into preparations for a Thursday night matchup with the Rams (8-4).

Throughout the season, coach Bill Belichick has been prodding his team to produce a complete effort in all three phases. It responded against the Chargers, suffocating one of the league’s top offenses while posting a season-high four touchdowns in the first half. It included three scores on offense and one of its two TDs in the game on special teams.

“I think our entire team has gotten better pretty much weekly. We just do things better than we have done them before,” Belichick said.

The bad news for the Patriots is that as well as they played on Sunday, they failed to make up any ground in the AFC standings.

They entered the week still in 10th place in the conference. The teams that currently occupy the three playoff wild-card slots — the Browns (9-3), Dolphins (8-4) and Colts (8-4) — all won on Sunday.

Miami is one of New England’s final four opponents, along with Buffalo.

“We understand what position we are in, and everything is pretty much in front of us,” said quarterback Cam Newton, who ran for two touchdowns and threw for another. “We just have to really hone in and focus on the opponents that we have to face that week and maximize each and every opportunity that we do get. If we keep that going on, we’ll be in good graces.”

That cautious optimism extended to Belichick.

“We’ll see," Belichick said. “The Rams are a great football team. They’re well-coached and they have a lot of great players. They’re very difficult to play against, we all know that.”

New England’s special teams contributed big plays for the second straight game. Receiver Gunner Olszewski had a 70-yard punt return for a touchdown to put the Patriots up 14-0 in the second quarter, along with a 61-year return in the fourth. Safety Devin McCourty also put points on the board, scooping up Cody Davis’ field goal block in the closing seconds of the first half and returning it 44 yards for a touchdown.

The offense ran for at least 150 yards for the seventh time, but continues to struggle in the passing game. Newton was 12 of 19 for 69 yards, the third time this season he has thrown for fewer than 100 yards. He ranks 26th in the NFL with 1,051 of his 2,053 passing yards coming through the air to receivers. His 69.6% accuracy ranks 24th in the league.

Cornerback J.C. Jackson continues to add to his career season. He added his seventh interception of season in the third quarter and now has nine total takeaways on the season (two fumble recoveries). The most takeaways in a single season by a Patriots player during Belichick’s tenure is 10 by Asante Samuel in 2006.

After being penalized 13 times over the previous two weeks, the Patriots were called for just three penalties on Sunday. But defensive lineman Adam Butler was responsible for two of the three infractions — encroachment in the second quarter and holding in the fourth.

Cornerback Jonathan Jones and tight end Ryan Izzo suffered neck injuries and did not return, putting their availability in question on a short week. Neither player has missed a game this season. The Patriots have some depth in the secondary if Jones doesn’t play. Tight end Dalton Keene was also active for the first time Sunday after spending three weeks on injured reserve.

4 — The number of games this season that Newton has had at least two rushing touchdowns, which are the most by a quarterback in a single season in NFL history. His 10 career games with two or more rushing scores are also the most by a QB in league history.

The Patriots remained in Los Angeles after Sunday’s win and will practice on the campus of UCLA in preparation for Thursday night’s matchup with the Rams.