Playoff berth at stake for 49ers, NFC West on line for Rams 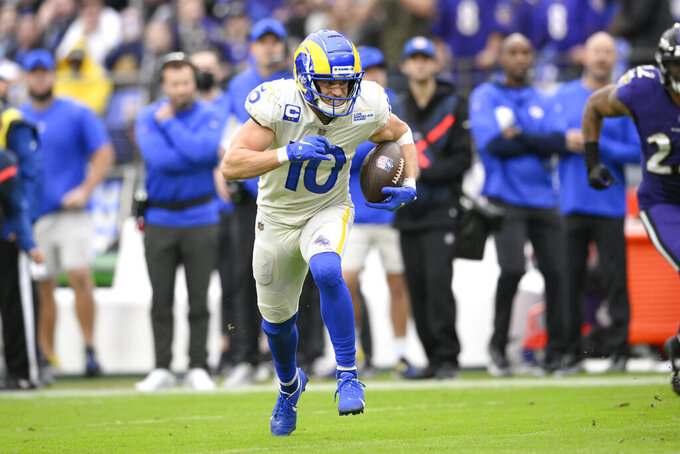 Los Angeles Rams wide receiver Cooper Kupp runs with the ball after making a catch against the Baltimore Ravens during the second half of an NFL football game, Sunday, Jan. 2, 2022, in Baltimore. On the play, Kupp broke the Rams' franchise single season record for most receiving yards after surpassing Isaac Bruce's 1,781 yards set in 1995. (AP Photo/Nick Wass)

TURNOVER DIFFERENTIAL: 49ers minus-4; Rams plus-2.

49ERS PLAYER TO WATCH: WR Deebo Samuel gave Los Angeles fits in the first meeting, catching all five passes thrown his way for 97 yards and a touchdown, rushing for 36 yards and a touchdown. In his past three games against the Rams, Samuel is averaging 7.3 receptions for 98.7 yards, a major reason for San Francisco’s recent success in the series. Samuel is the only player in NFL history with at least 1,300 yards receiving and 300 yards rushing in the same season.

RAMS PLAYER TO WATCH: WR Cooper Kupp has a chance to set the NFL’s single-season records for receptions and yards receiving. Kupp has 138 catches, 11 behind Michael Thomas’ 149 for New Orleans in 2019. Kupp’s 1,829 yards put him 135 behind Calvin Johnson’s 1,964 for Detroit in 2012. Kupp is also on track to become the first player to lead the league in receptions, yards receiving, and touchdown receptions since Steve Smith in 2005. Remember, this is the first season the NFL is playing 17 games.

KEY MATCHUP: 49ers RB Elijah Mitchell vs. Rams DL Aaron Donald. San Francisco was able to grind down Donald and the Rams’ defensive line in November, rushing 44 times for 156 yards. Mitchell did most of the heavy lifting with 91 yards on 27 attempts. It cannot happen again if Los Angeles is going to win to secure the NFC West title and No. 2 seed in the playoffs. Donald and his colleagues up front will have to shut down Mitchell, — whose 878 yards rushing are the most for a Niners player in his first NFL season — to be able to play to their strength and rush the passer.

KEY INJURIES: 49ers QB Jimmy Garoppolo is trying to make it back from a right thumb injury that sidelined him last week. If Garoppolo cannot play, rookie Trey Lance will make his third start. ... The Niners have several DBs on the COVID-19 list, including S Jimmie Ward and CBs Ambry Thomas, K’Waun Williams, Dontae Johnson and Deommodore Lenoir. Their status for this week remains uncertain. ... CB Emmanuel Moseley could return from an ankle injury. Rams RB Cam Akers is set to make his season debut after tearing his Achilles tendon in July. … S Nick Scott could play with a cast after breaking his thumb against Baltimore.

STATS AND STUFF: The 49ers will clinch a playoff berth with a win or tie. They can also make it if New Orleans loses to or ties Atlanta. … TE George Kittle needs 100 yards receiving for his third 1,000-yard season. If he gets there, Kittle and Samuel (1,310) would be the first San Francisco teammates to reach 1,000 yards together since Jerry Rice and Terrell Owens in 1998. … The Niners are 5-1 this season when rushing for at least 150 yards. … Edge rusher Nick Bosa has a career-high 15 sacks, with at least one sack in 11 games. … Donald has 12 1/2 sacks in 14 games against San Francisco. He needs two more to become the seventh active player with 100 career sacks. … Rams QB Matthew Stafford has thrown multiple interceptions in four games. He was intercepted twice by the 49ers, with Ward returning one 27 yards for a touchdown. … Los Angeles is second in the league with 10 receptions of 50-plus yards, trailing Cincinnati (12). WR Van Jefferson has four of those plays.