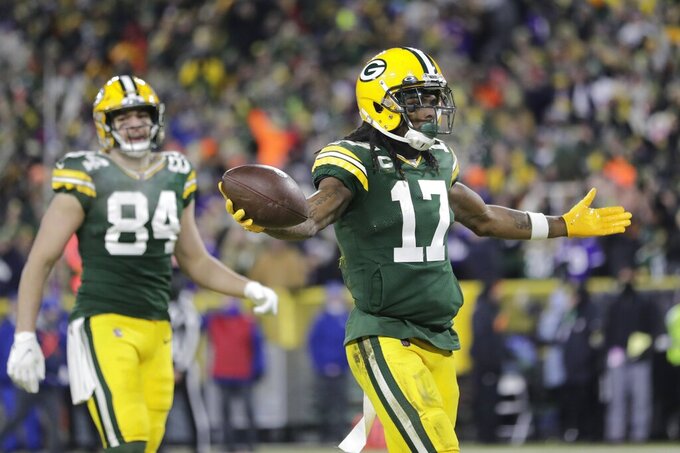 Green Bay Packers' Davante Adams reacts after catchiong a touchdown pass during the first half of an NFL football game against the Minnesota Vikings Sunday, Jan. 2, 2022, in Green Bay, Wis. (AP Photo/Aaron Gash)

GREEN BAY, Wis. (AP) — The Green Bay Packers found a way to earn the NFC’s top playoff seed even after injuries left them without a few of their top performers from last season.

Whether those guys will return in time for the postseason remains up in the air.

The Packers (13-3) are seeking their first Super Bowl berth since their 2010 title. That quest would get easier if offensive tackle David Bakhtiari, cornerback Jaire Alexander and outside linebacker Za’Darius Smith are able to help.

“I would say we’ve been optimistic all season long and yet here we are, so it’s just one of those things,” Packers coach Matt LaFleur said Sunday night after the 37-10 blowout of the Minnesota Vikings that clinched the No. 1 playoff seed. “I know those guys are doing everything they can to try to get back as quickly as possible. We’re hopeful, but nothing’s guaranteed.”

Alexander had been practicing before getting placed on the reserve/COVID-19 list Sunday. LaFleur said Bakhtiari is expected to practice some this week.

“I think the ideal scenario is that he would play and get some snaps under his belt before you proceed to the postseason,” LaFleur said Monday. "But we’ll see where he’s at, at the end of the week.”

While the Packers’ regular-season finale at Detroit (2-13-1) has no bearing on their playoff positioning, LaFleur said he’s tentatively planning to play his regulars and approach it like a typical game.

LaFleur cited the long wait before the divisional playoffs take place on Jan. 22-23.

“I’m not comfortable having essentially a three-week layoff for our guys,” LaFleur said. “And I know that you can look at it a million different ways and there’s never a right answer unless it works out.”

Adams has 1,498 yards receiving to put him well within reach of the single-season franchise record owned by Jordy Nelson, who had 1,519 in 2014. Rodgers has been dealing with an injured left pinkie toe, but says he was encouraged by how he felt during the Vikings game.

“This is the first game that my toe got through the game without any issues, no pregame painkiller shot, so I’m feeling good,” Rodgers said. “I’m happy about it. There was definitely a time a few weeks ago when we started to project and think if we could get the one-seed it could be two-plus weeks of rest, but I’m going to play next week and I expect Davante to play and our guys to play, so we’re looking forward to finishing off the season on a high note and then getting the bye.”

One week after allowing 219 yards on 25 carries in a 24-22 victory over the Cleveland Browns, the Packers shut down the Vikings’ ground attack. The Packers outrushed the Vikings 174-27. Minnesota’s Dalvin Cook had just 13 yards on nine carries. ... The offensive line hasn’t allowed a sack in either of its last two games.

The Packers reached the red zone on three of their first four possessions Sunday, but totaled just six points from those drives. The Packers have been outscored 77-44 in the first quarter this season, though they’ve been dominant in the second and third periods.

TE Josiah Deguara. He couldn’t hang on to a pass in the end zone on the game’s opening drive as the Packers settled for a field goal.

The Packers hope to avoid any major injuries as they close the regular season at Detroit on Sunday.