Pro teams bring betting to the game with stadium sportsbooks 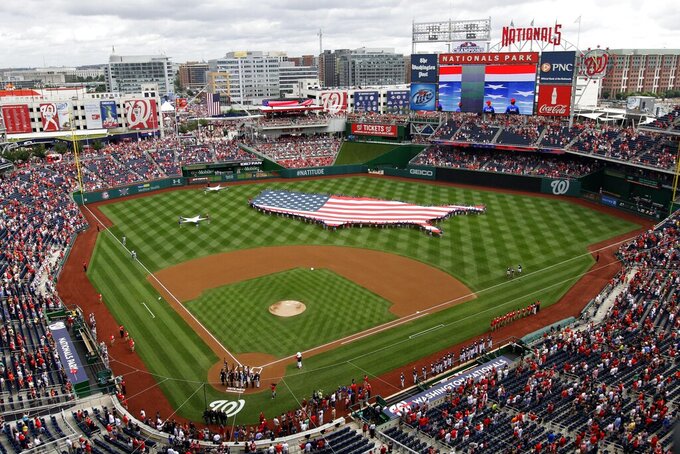 FILE - This July 4, 2013, file photo shows a U.S. flag, in the shape of the country, in the outfield before a baseball game between the Washington Nationals and the Milwaukee Brewers at Nationals Park in Washington. Professional sports teams and gambling companies in the U.S. are increasingly bringing the sports book to the game, opening sports betting facilities in or near stadiums. (AP Photo/Mark Tenally, File)

ATLANTIC CITY, N.J. (AP) — Professional sports teams and gambling companies in the U.S. are increasingly bringing sportsbooks to the game, opening betting facilities in or near stadiums.

It might seem counterintuitive to spend millions on brick-and-mortar retail outlets when over 80% of U.S. sports betting is done via phone or computer. But the idea is not only to cash in on game day traffic, but to provide a place for fans to eat, drink, watch — and bet on — many types of sports all year long, even when the stadium is empty.

This week alone, BetMGM opened a sportsbook at Nationals Park, the Washington, D.C., home of baseball’s Washington Nationals, and FanDuel announced plans for a sportsbook inside Chicago's United Center, where the NBA's Bulls and the NHL's Blackhawks play.

“People still want to wager in person,” said Keith Wall, FanDuel's vice president of retail operations. “You have sports betting operating right where the fans are.”

Matt Prevost, BetMGM's chief revenue officer, said retail outlets are designed as much for off-days as for game days.

The first bet MGM's Washington book took was $5 on the San Francisco 49ers to beat the Los Angeles Rams last Sunday — the first win for the house.

FanDuel and the Phoenix Suns opened a sportsbook at the Footprint Center last September.

“It's been very successful,” Wall said. “We're really happy with how it has performed and the foot traffic we've had there. We're right in the center of things in Chicago and downtown Phoenix, both very accessible locations at all times of the year.”

The company hopes to have its Chicago facility up and running in time for the start of basketball and hockey in the fall.

When the NFL season resumes this fall, the Arizona Cardinals will have a BetMGM sportsbook on the grounds of State Farm Stadium.

DraftKings is planning a sportsbook adjacent to Wrigley Field in Chicago, where the Cubs play.

Capital One Arena in Washington, home to the NHL’s Capitals and NBA’s Wizards, opened a sportsbook in 2020. (The WNBA’s Washington Mystics, also owned by the same company, play in Entertainment & Sports Arena, a different Washington facility.)

Legislation is pending in New York that would allow betting kiosks in venues like Madison Square Garden, Yankee Stadium, the Mets' Citi Field, and Highmark Stadium, home to the NFL's Buffalo Bills.

Since the U.S. Supreme Court cleared the way in 2018 for all 50 states to offer legal sports betting, fans have already been betting on games from their seats in stadiums and arenas using their mobile phones.

Teams around the country also have opened sports betting lounges aimed at those fans. But these lounges do not offer bets themselves.

That is largely the domain of sportsbooks on stadium grounds, but outside the walls of the facility like the ones in East Rutherford, New Jersey, where the NFL's Giants and Jets play, and in Philadelphia, near the homes of the NFL's Eagles and baseball's Phillies.

This story was first published Feb. 1, 2022. It was updated Feb. 2, 2022, to correct the location where the WNBA’s Washington Mystics play. The team plays in Entertainment & Sports Arena, not Washington’s Capital One Arena.