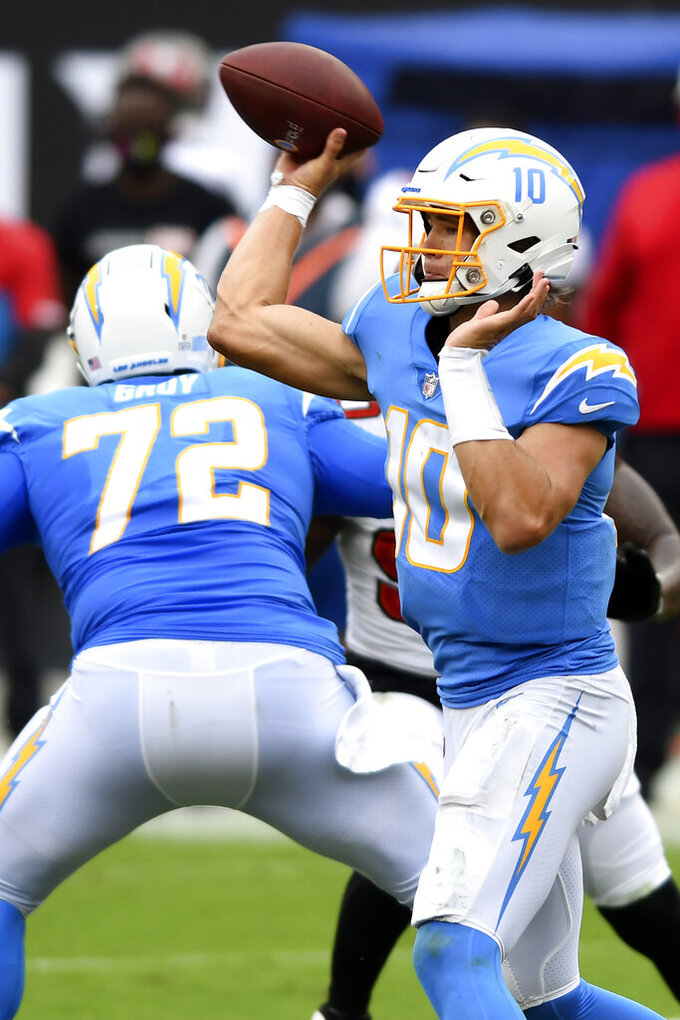 NEW ORLEANS (AP) — Justin Herbert was 7 years old when Drew Brees left his final game for the Chargers with a career-threatening shoulder injury.

A decade-and-a-half later, they’re set to be on opposite sidelines on Monday night, with Herbert the promising Chargers rookie QB and Brees a Saints icon -- not to mention the NFL’s all-time leading passer.

“I remember my first starts in this league and it’s a bit of a whirlwind,” recalled Brees, a 2001 second-round pick of the Chargers. “You feel like you’re learning on the fly and you’re trying to absorb all this information – the offense that you’re running and the defenses that you’re going up against each and every week and it’s just all so new.”

Not that the 41-year-old quarterback dismisses Herbert’s potential to make good things happen for Los Angeles (1-3) in the Superdome.

“He is definitely a very talented player,” Brees continued. “Some of the throws I’ve seen him make over the last few weeks have been pretty impressive and obviously he’s a big athlete who can do a lot of things both with his arm and with his legs -- and it seems like they’re asking him to do a lot, which shows his versatility.”

Although the Chargers have lost three straight, they’ve been competitive.

They took defending Super Bowl champion Kansas City to overtime. Only a dropped lateral on the final play deprived them of a golden opportunity to pull out a Week 3 win over Carolina. Last week, they went toe-to-toe with Tom Brady’s Buccaneers in a 38-31 loss.

“It’s been frustrating and it’s been a gut check,” Chargers coach Anthony Lynn said. “But we know if we continue to grind and do what we’re doing and stay connected, we know it’s going to turn. We have a lot of good reasons to believe that; there’s a lot of good on tape.”

Likewise, the Saints (2-2) liked what they saw last week in Detroit, when they stormed back from an early 14-0 hole with five straight touchdown drives and snapped a two-game skid.

Brees, who's broken about every passing record that matters since joining New Orleans in 2006, said the Saints' offense looked more like it should.

“I don’t think it was very good for the first three games,” Brees said. “There’s a lot going on with each and every play and with the way we substitute, who we’re getting in the game and the tempo that we’re try to operate at. Definitely something we’ve all had to work at and I definitely feel like last game was our best in regards to that.”

Lynn said Brees “looks he found the fountain of youth,” adding, “he looks pretty damn good to me.”

Austin Ekeler’s hamstring injury likely elevates Joshua Kelley to the lead running back spot. The rookie leads the team in carries (52) and is averaging 3.3 yards per carry, but he has been plagued by fumbling issues the past two games. His turnover on a botched hand off late in the first half at Tampa Bay last week led to a Buccaneers touchdown to bring them within 24-14 at halftime.

The Chargers have been hoping Justin Jackson would have more of a role, but he was sidelined with a quad injury the first three weeks. He finally played last week but had only 13 yards on eight carries.

After facing the league’s top run defense last week, Los Angeles faces a Saints unit that is tied for sixth. Compounding the problems for the Chargers is that they may be without the right side of their offensive line again. Guard Trai Turner has missed three games with a groin injury and tackle Bryan Bulaga was out last week with back and knee problems.

Saints defensive end Cameron Jordan, who led New Orleans with 15½ sacks last season, did not get his first this season until last Sunday. The current team leader in sacks, with three, is Trey Hendrickson, who has seen more playing time with Marcus Davenport missing the first four games. But Hendrickson indicated that it might not take long for Jordan to pass him.

“Last year, on Thanksgiving, he had four” sacks in one game, Hendrickson said. “That guy knows how to bring it every day, every practice, and I wouldn’t bet against him.”

Chargers defensive end Joey Bosa had a sack in the first three games but he and the rest Los Angeles’ defense barely pressured Brady last week. They will face a similar quarterback in Brees, who has faced pressure 17.2% of the time, tied for sixth-lowest in the league. Defensive end Melvin Gordon will miss his third straight game with a knee injury.

Los Angeles’ secondary aims to bounce back after being shredded by Brady and Co.

While Saints running back Alvin Kamara is off to a torrid start, there is more to New Orleans' backfield. Latavius Murray's bruising style complements Kamara's elusiveness. And while Kamara is much more of a factor in the receiving game than Murray, both catch the ball. Together, they've combined for 786 yards and nine TDs from scrimmage in four games.

An earlier version of this story incorrectly stated Herbert was 6 when Brees played his last game for the Chargers. Herbert was 7.