Raiders bid farewell to Oakland in game vs. Jaguars 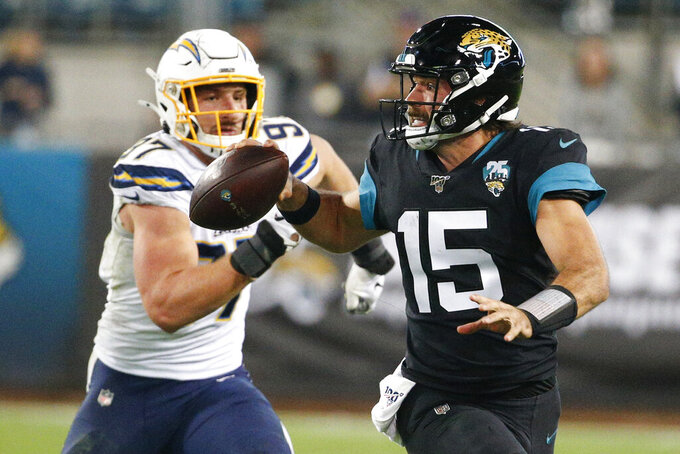 Jacksonville Jaguars quarterback Gardner Minshew (15) scrambles away from Los Angeles Chargers defensive end Joey Bosa, left, as he looks for a receiver during the second half of an NFL football game, Sunday, Dec. 8, 2019, in Jacksonville, Fla. (AP Photo/Stephen B. Morton) 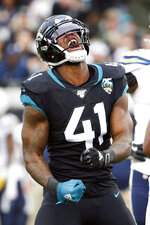 OAKLAND, Calif. (AP) — Just a few weeks ago it looked as if the final regular-season game in Oakland could be an important one in the playoff chase for the Raiders and Jacksonville.

Recent slumps by both teams have ended all that talk, leaving the farewell to the Coliseum as the only meaningful story line when the Raiders (6-7) host the Jaguars (4-9) on Sunday in their final home game before moving to Las Vegas next season.

"It's hard right now to really think about what it's going to be like stepping in there for the last time ever," Raiders coach Jon Gruden said. "The last time of the season is one thing, the last time ever really hits a tone with me and I'm sure a lot of people."

The Raiders come into the game having lost three in a row, all by at least 21 points, and are all but eliminated from playoff contention. The Jaguars' skid is even longer; they are the first team in 33 years to lose five straight by at least 17 points.

But for Sunday, the focus will be on the end of an era in Oakland.

The Raiders have been through dress rehearsals for this a couple of times in recent years, with home finales in 2015 that was also Charles Woodson's final home game and last year serving as possible farewell games before the team ended up staying in Oakland just a bit longer.

But with the stadium in Las Vegas on target to open next summer, this time it should be for real.

"I guess you erase those memories and take on these ones I guess because all of the players that have played here, this organization's history, all of those things," quarterback Derek Carr said. "I was here for 'C-Wood's' last game. There was some pretty cool memories that I have just of my own being on the team, but I think this one will rank right up there. I expect it to be crazy and loud and all those kinds of things."

Jaguars coach Doug Marrone was drafted by the Raiders in 1986 when the team was in Los Angeles but never played for the franchise. But he still enjoyed his visits to Oakland when he was with the Jets and Buffalo, especially when he got to visit with late owner Al Davis.

Marrone remembers being razzed by fans and how intense the environment could be and will make sure his players are prepared.

"We tried to give them a sense of and when I say crazy atmosphere, I mean that in a very positive sense," he said. "We talked about the locker room and we've talked about it. I think it will be an emotional day for a lot of people there. ... There will be a lot of emotion knowing that finally, I know last year they went through it a little bit, but the finality of it being the last game for sure."

While the Jaguars haven't been to Oakland in six years and many of their players have no experience at the Coliseum, some veterans are looking forward to being part of the celebration on Sunday.

"The fans come early and get all dressed up and they use intimidation tactics and they talk trash. It's definitely fun," defensive lineman Calais Campbell said. "I grew up in Denver so I grew up in the division, so I know a lot about the Black Hole. It's definitely exciting, especially with the history and this being the last game there. You try to play spoiler."

The Jaguars credit one team with doing the most to land them standout defensive end Josh Allen: the Raiders. The Jags had done countless mock drafts, and just a couple of those netted Allen with the seventh-overall pick. They figured the only chance they had was if the Raiders chose someone off the radar. Oakland went with Clemson defensive end Clelin Ferrell with the fourth selection, allowing Allen to fall to Jacksonville.

"We wish we could have taken Josh and Clelin," Gruden said with a laugh. "It was a tough decision, and I know Jacksonville's got a good young player there that's a great kid, too."

Allen leads all rookies with nine sacks and is a defensive cornerstone of the franchise's pending rebuild.

Jacksonville has two wins in 14 trips to the West Coast, with both victories coming in Oakland. The Jaguars are winless in Seattle, San Francisco, San Diego and Los Angeles. But they're 2-3 against the Raiders, winning there in 1997 and in the 2004 season finale. Scoring has been an issue with each of Jacksonville's cross-country trips. The Jags have averaged 13.6 points in five games at the Oakland Coliseum.

The Raiders have taken losses at safety with rookie Johnathan Abram going down with a season-ending shoulder injury in the opener and then losing Karl Joseph to a season-ending injury last month. Oakland brought in D.J. Swearinger in to fill the void but that didn't work out and he was released this week. Now the Raiders might move cornerback Daryl Worley to safety, which would create an opportunity to get a better look at younger cornerbacks like Trayvon Mullen, Isaiah Johnson and Nick Nelson.