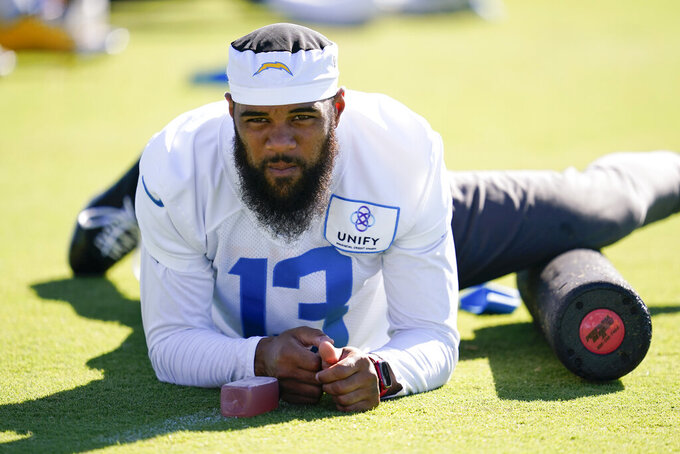 TURNOVER DIFFERENTIAL: Raiders minus-9; Chargers minus-1.

RAIDERS PLAYER TO WATCH: WR Davante Adams. The Raiders get to show off their big offseason addition when they pair one of the most prolific receivers in the game with his old college quarterback, Derek Carr. Adams is one of five players in NFL history to catch at least 115 passes in consecutive seasons. He leads the NFL with 432 catches, 5,310 yards and 47 TDs the past four seasons.

CHARGERS PLAYER TO WATCH: LB Khalil Mack. Los Angeles needed another dominant pass rusher to pair with Joey Bosa, and Mack should fit the bill with 76 1/2 sacks, three first-team All-Pro honors and the 2016 Defensive Player of the Year award to his credit. But Mack had six sacks in seven games with the Chicago Bears before undergoing season-ending foot surgery, and the 31-year-old must prove he can still dominate.

KEY MATCHUP: Raiders RB Josh Jacobs vs. Chargers DL Sebastian Joseph-Day and Austin Johnson. Jacobs delivered his best performance of a disappointing third NFL season in the finale against Los Angeles with 132 yards and a touchdown on 26 carries. The Chargers signed Joseph-Day, who played for coach Brandon Staley in 2020 when he was defensive coordinator for the Rams, and Johnson, who had 72 tackles and 3 1/2 sacks with the New York Giants last year, to revamp the middle of their front. If they can’t keep Jacobs under wraps, it will make it that much harder to contain the Raiders’ potent pass attack when it uses play action.

KEY INJURIES: The Raiders had no players on their injury report. ... Chargers CB J.C Jackson is no longer in a walking boot after undergoing ankle surgery on Aug. 23, but the availability of the prized free-agent signing to play on Sunday is uncertain.

SERIES NOTES: The teams will meet in the season opener for the ninth time with the Raiders winning the first five and the Chargers the past three. … The Chargers are 3-2 against the Raiders in home games since moving to Los Angeles in 2017. ... Five of the past six meetings between the longtime rivals have been decided by seven points or fewer, with two of the past three going to overtime.

STATS AND STUFF: Coach Josh McDaniels makes his debut with Las Vegas. He had an 11-17 record in 2009-10 with Denver. ... The Raiders have won three straight season openers. The previous time they won four openers in a row was from 1987-90. ... Las Vegas has 10 rookies on the 53-man roster. The Raiders have played at least 10 rookies in an opener only once since the merger. They played 11 in 2019. ... Carr threw for a franchise-record 4,804 yards last season and is one of four QBs with at least 4,000 yards passing the past four seasons along with Tom Brady, Aaron Rodgers and Patrick Mahomes. ... Raiders edge rusher Chandler Jones leads the NFL with 107 1/2 sacks and 33 forced fumbles since entering the NFL in 2012. ... The Raiders were sixth worst last season converting red zone trips into TDs on offense (51.7%) and worst at preventing them on defense (16.7%). ... DE Maxx Crosby’s 25 sacks are the fourth most by a Raiders player in his first three seasons. ... Chargers QB Justin Herbert accounted for 77 total touchdowns through his first two seasons, breaking the previous NFL record held by Dan Marino (70). ... Los Angeles went for it on fourth down 34 times last season, converting 64.7%. They were 8 of 10 (80%) in two games against Las Vegas. … Bosa had seven of the Chargers’ 11 strip-sacks last season. … The Chargers scored a league-high 181 points in the fourth quarter last season. Only the 2013 Denver Broncos (183) scored more in the final frame in NFL history. ... RB Austin Ekeler had 12 rushing touchdowns and eight receiving. San Francisco WR Deebo Samuel (eight rushing, six receiving) and Atlanta RB Cordarrelle Patterson (six rushing, five receiving) were the only other players with at least five touchdowns rushing and receiving. ... The Chargers ranked third in penalties (116) and fifth in penalty yards (1,033). They had more penalty yards than their opponent in 11 games.

FANTASY TIP: Chargers WR Keenan Allen is always a reliable option in formats that reward receptions, but he has just one touchdown catch in his past six games against the Raiders.