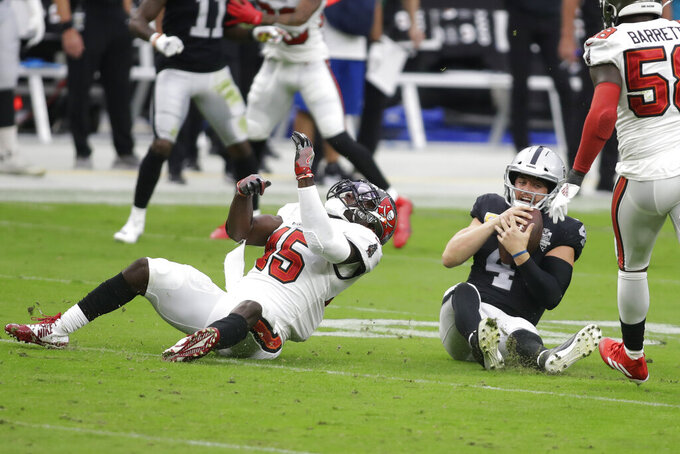 LAS VEGAS (AP) — The Las Vegas Raiders started their week of practice for the Tampa Bay Buccaneers by sending home their entire starting offensive line after Trent Brown tested positive for the coronavirus.

The four other starters weren’t allowed to return until Sunday morning with their only real preparation coming from individual workouts at home and Zoom calls to learn the game plan.

The result was predictably not a good one as the Raiders matched their season high by allowing three sacks and got no running game going in a 45-20 loss to the Tampa Bay Buccaneers on Sunday.

“I’m not going to use any excuses, we can’t,” quarterback Derek Carr said. “We’re in a production-oriented business. The miscommunication, absolutely, it took place. It’s a game of practice, it really is. You got to be available, not just for Sundays, you got to be available all throughout the week cause there’s so much information that goes into it.”

The problems on the line only got worse when right tackle Sam Young went down with a knee injury in the second quarter and right guard Gabe Jackson was ejected in the third when officials ruled he stepped on an opponent’s shoulder during a scrum after a touchdown that cut Tampa Bay’s lead to 24-17.

Little went right after that and the Raiders (3-3) went on to their most lopsided loss of the season.

The problems began on Las Vegas’ next drive when coach Jon Gruden opted to kick a field goal on fourth-and-1 from the 17 to cut the deficit to 24-20.

“It’s easy to second-guess right now, but in hindsight I probably would have done the same thing,” Gruden said.

The troubles mounted when Leonard Fournette took a dumpoff pass 13 yards on third-and-13 to help the Bucs drive down for another TD to go up by 11.

Carr then threw an interception on the Raiders' next play to set up another score and Tampa scored again with a short field after Las Vegas was stopped on fourth-and-1 from its own territory.

The Raiders struggled all day to run against Tampa’s dominant front, with Josh Jacobs being held to 17 yards on 10 carries and the team averaging 3.2 yards per carry overall. The Bucs also had three sacks.

“The Buccaneers are one of the top run-stopping defenses in the league,” left tackle Kolton Miller said. “We did the best we could with the circumstances throughout the week. I think it could be one or two communication things, or a few things, with running (protection). It’s those little details you miss out not being with the team during the week.”

The Raiders were hampered all week after Brown was placed on the COVID-19 list on Wednesday. The four other linemen also had to be sidelined for five days because they were not wearing masks at practice on Monday when they were too close to Brown even though the Raiders were in “intensive” protocols that required mask wearing.

“It was unexpected,” Miller said. “This whole year has been weird with the virus. We did the best we could and we followed protocol along the way. Individually, we tried to do the best with what we could.”

Safety Johnathan Abram also missed the game because he had close contact with Brown on Tuesday and the defense was carved up by Tom Brady.

Brady threw for 369 yards and four TDs, while getting sacked no times and hit only once.

“We did not get enough pass rush today,” Gruden said. “If you let Tom Brady stand back there and survey the field, he’s proven ... that he’s still one of the very, very best. They have an arsenal of weapons. It’s a credit to them, but we have to generate a better rush and until we do it’s going to continue to be tough.”