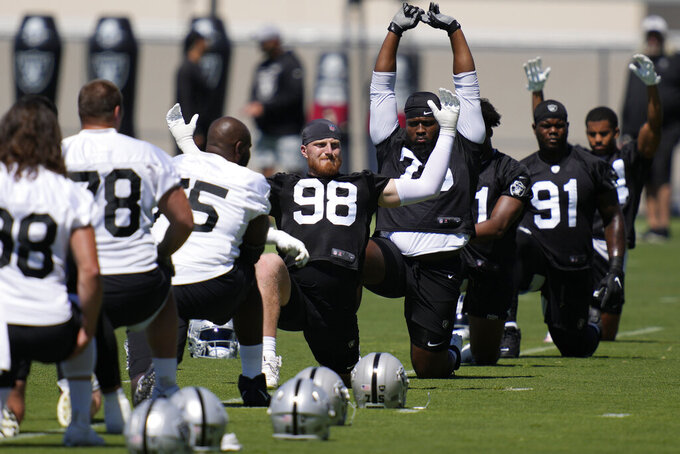 HENDERSON, Nev. (AP) — When Las Vegas Raiders owner Mark Davis chose his new coach in January, he made it clear Josh McDaniels' success as an offensive coordinator in New England weighed heavily on his decision.

“I’ve just always seen the Patriots as a team that not only adapts from week to week or half to half but maybe even series to series,” Davis said at McDaniels’ introductory news conference on Jan. 31. “I just believe in Josh’s ability to assess a situation and make the changes in real-time, and that’s always been something that’s impressed me."

Make no mistake, though, the Raiders have been adamant during their three-day mandatory minicamp that they’re establishing their own identity — this isn’t “Patriots West.”

“This is something totally different,” said running back Brandon Bolden, who won two Super Bowls over two stints with the Patriots. “Josh is going to put his own spin on things. Is it a few things that we learned along the way because I was there with him a lot of the time? I mean, sure. But we’re not trying to be New England. We’re not trying to be like New England. We’re the Las Vegas Raiders and that’s what we’re going to play as."

Bolden did say his presence, along with that of other former Patriots including linebacker Chandler Jones, quarterback Jarrett Stidham, running back Jakob Johnson and safety Duron Harmon, allows them an opportunity to give their new teammates a “heads up” on situational plays or simply alert them to things they should expect on a daily basis.

The players aren’t the only ones who have benefitted from having a bit of Patriots overflow in Las Vegas.

“Not only position groups, but coaches,” running backs coach Kennedy Polamalu said. "You know, offensive coordinator, our line coach, our quarterback coach on offense, it’s been really good to go through the process and grow and learn together.”

Quarterback Derek Carr said he’s always been a fan of New England coach Bill Belichick, intrigued by the things he has implemented schematically over the years.

“Our system is different than anything I’ve been in before; but once you’re in it you’re like, 'Wow, I see why it was so successful,‘” Carr said. “Being in it and learning the details of it, and having the OTAs to grind through, that has been huge.”

For Darren Waller, watching old clips of Rob Gronkowski “running wild” during his time with the Patriots has helped him learn how the four-time Super Bowl champion tight end lined up in specific schemes, created seams off the snap, caught short passes, or hauled in fade balls on the outside.

“It’s exciting to see different ways that I’ll be used. I’m very excited about it,” Waller said. “It’s a challenging system, but I love a good challenge. It’s bringing out the best in us.”

McDaniels has said since day one that Davis set a standard everyone is expected to adhere to, including the coaches. While McDaniels may be the leader, the team culture will be determined by the players and all the people in the building.

It’s an approach, along with McDaniels' winning mentality, that hasn’t gone unnoticed by the team’s biggest offseason acquisition.

“I haven’t had to learn a new system for quite some time now,” wide receiver Davante Adams said. "This is a bit of a change, but I’ve been enjoying it. Josh has an incredible football mind, so just knowing things that he’s accomplished ... having the experience like that, and having been to the big game almost 10 times, that means a lot. Every time you can bring somebody in that just knows how to win, it just gives you a lot of confidence as an offense. We bought into everything that he’s taught us and everything that he stands for and we just gotta keep stacking days in and make it about something."