Rams' Donald: 'Only thing I am lacking is being a champion.' 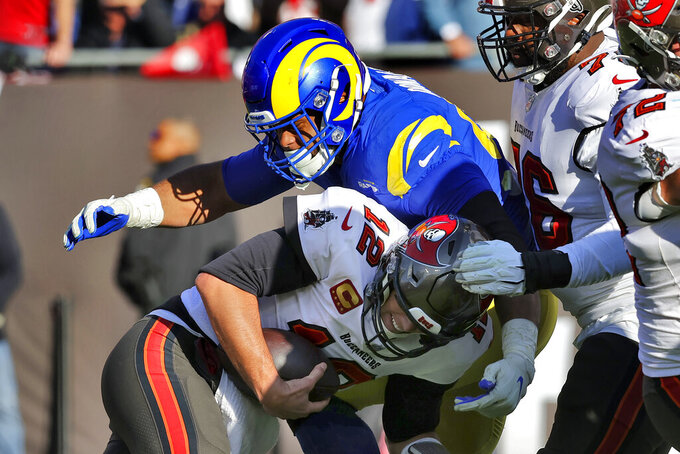 LOS ANGELES (AP) — Aaron Donald is firmly in conversations about the top pass rushers in NFL history. The Los Angeles Rams' superstar defensive tackle knows that he is on another list that he would like to remove himself from — great players who haven’t won a championship.

As the Rams prepare to host the San Francisco 49ers in Sunday’s NFC championship game, Donald’s teammates and coaches are united in their resolve to get him off that list.

“This building wants to win for Aaron Donald to create more mystique to his legacy and what he’s done,” defensive coordinator Raheem Morris said. “I remember when I first got here and watched last year’s divisional playoff game loss at Green Bay. I looked into his eyes and felt that pain and hurt. My feet are easily in their place because of what it would mean to win a championship.”

Much like going against opposing offensive linemen, Donald did not shy away from discussing the lack of a title this week when he said “I feel like I accomplished a lot in a short amount of time in this league. The only thing I’m lacking now is being a world champion.”

When it comes to losses, last year’s playoff game and the Super Bowl defeat against the New England Patriots in 2019 have provided extra motivation for Donald in this year’s playoff run. He is trying to do is not make it solely about him.

“It’s for the organization. It’s for guys like Whit (offensive tackle Andrew Whitworth) and (QB Matthew) Stafford that have been playing this game a little longer than me and haven’t experienced that either,” Donald said. “We have a lot of veteran guys that we’re trying to get that ultimate goal for. I know I’m giving it my all and trying to do everything I can in my power to do my part to help accomplish that goal. Knowing that those guys are riding with me means a lot.”

Morris said Donald has been more vocal in meetings and practices this week, reiterating the stakes of Sunday’s game to teammates. Cornerback Jalen Ramsey noted that Donald reiterated the keys to the game and took on more of a willingness to lead verbally.

Donald credited Von Miller for helping him become more of a vocal leader.

“I have always considered myself a leader, but more of a lead by example guy. One thing Von has been challenging me a lot more with is just him talking to me, being more vocal, talking to the guys, letting them hear my voice,” Donald said.

Donald and the Rams will face their biggest challenge of the season in trying to end a six-game losing streak to the 49ers. Coincidentally, the Rams’ last victory over San Francisco was in 2018, the last time they advanced to the Super Bowl.

The 49ers and quarterback Jimmy Garoppolo have done a good job of containing Donald of late. In the last four games, they have held him to one sack, including none in the two matchups this season.

“I think they stick with a game plan. They find ways to win, and that’s the most important thing. We’ve just got to do our job,” Donald said. “This is a different type of football here that’s going on this week. This is one game away from the Super Bowl against an opponent that we’re both used to. We know what to expect. We just have to play four quarters. We’ve got to find a way to finish.

“Obviously, they’ve beat us in ways. I’m not going to sit here and talk about it, but they did. This week, my mindset is there’s no way we’re going to lose this game. We have to play for quarters. We have to find a way to finish, and I know we’re going to do that.”