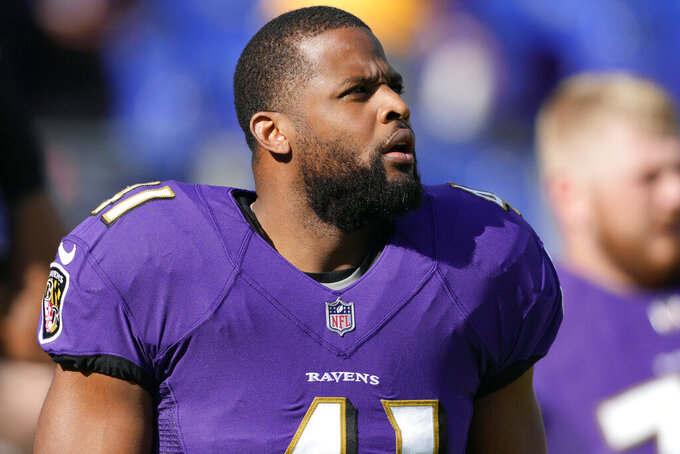 FILE - Baltimore Ravens safety Anthony Levine Sr. (41) warms up before an NFL football game against the Minnesota Vikings, on Nov. 7, 2021, in Baltimore. Levine announced his retirement Wednesday, Jan. 26, 2022, after a decade with the Ravens. (AP Photo/Nick Wass, File)

BALTIMORE (AP) — Anthony Levine announced his retirement Wednesday after a decade with the Baltimore Ravens.

The team said Levine will transition into a scouting and coaching role for the Ravens in 2022.

Levine played defensive back and linebacker and was a significant contributor on special teams. He turns 35 in March.

“Being here in Baltimore has been nothing but a blessing. Ten years went by so fast,” Levine said in a video posted by the Ravens. “It's the best thing that ever happened to me, besides my kids, my family.”

Levine entered the NFL as a rookie free agent with Green Bay in 2010. He played his first regular-season game two years later with the Ravens.

In 146 games with Baltimore, Levine had 87 tackles on defense and a franchise-record 62 on coverage units.

“Tough, smart, persistent and dependable, Anthony represents the very best of what it means to be a Raven," coach John Harbaugh said in a statement. “A relentless competitor and man of high character, Anthony poured every part of himself into the team. He worked tirelessly to become one of the NFL’s best special teams players, and he could always be relied upon to contribute at a high level on defense — no matter the role he was asked to play."