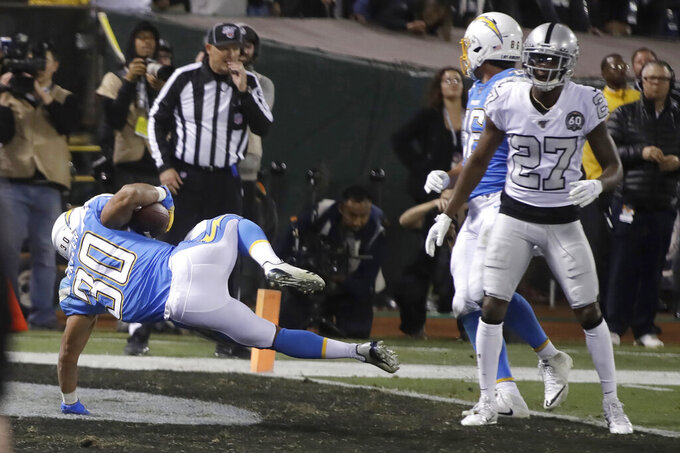 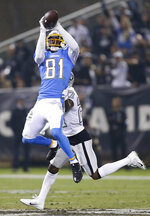 OAKLAND, Calif. (AP) — Philip Rivers had one drive to salvage an up-and-down performance and end his final scheduled trip to the Oakland Coliseum on a winning note.

Six straight incomplete passes followed by his third interception of the game ended those chances and dealt a serious blow to the Los Angeles Chargers' playoff hopes.

Rivers threw interceptions on his first two drives to put the Chargers in an early hole and then again on his final pass to seal the Oakland Raiders' 26-24 victory over Los Angeles on Thursday night.

"You give a team 10 points at their place and then you have the ball with a chance to win at the end and you have eight snaps and go nowhere, it's going to be tough to win," Rivers said.

Now it will be tough for the Chargers (4-6) to make the playoffs. They fell to seventh place in the AFC wild-card chase and can ill afford many more slipups if they want to get back to the postseason.

"That's probably the most upsetting thing about this is we can't afford another loss," said running back Melvin Gordon, who ran for 108 yards and a TD. "Have to play our best football, which isn't impossible, but we have to get some guys back and try to make this move."

A win against the Raiders (5-4) would have gone a long way to helping those chances, and Rivers was hopeful of delivering it at one of his favorite road venues.

Rivers made his NFL starting debut at the Coliseum and has the most wins (nine), yards passing (3,705) and TD passes (26) of any visiting quarterback in Oakland.

An errant pass to Keenan Allen that Erik Harris intercepted on the first drive of the game also gave Rivers the most interceptions with 11, breaking a tie with Joe Namath.

Rivers was off-target again on the second drive thanks to heavy pressure from the Raiders defense, and Harris returned that one 56 yards for a TD that made it 10-0 Oakland.

Rivers and the Chargers settled down from there as he capped a 16-play drive with a 2-yard touchdown to Hunter Henry. Gordon added another touchdown.

Rivers led a go-ahead drive in the fourth quarter capped by a 6-yard TD pass Austin Ekeler with 4:02 remaining, but the defense couldn't hold the lead, allowing Derek Carr and the Raiders to drive 75 yards capped by Josh Jacobs' 18-yard run with 1:02 to play.

When Daniel Carlson missed the extra point to keep the score 26-24, that left plenty of time for Rivers to engineer a winning drive for a field goal.

He threw three straight incomplete passes to start it off, only to get bailed out by a fourth-down holding call on Trayvon Mullen. That only prolonged the agony as Rivers threw three more incomplete passes as the Chargers didn't get the ball to Gordon at all on a night where he was the most effective option despite having all three timeouts.

"We were trying to move the ball downfield," coach Anthony Lynn said. "We needed to score. They did a heck of a job. They locked us up. We had eight shots, I don't think we gained one yard. Put ourselves in position to win at the end. We didn't stop anybody and we didn't make any plays on offense. It's disappointing."

Then Rivers' night ended when his last-gasp pass to Allen was intercepted by Karl Joseph, setting off a wild celebration at the Coliseum.

"It was not the way you want to end your time coming here," he said. "It's one of the last-standing, one of the last few active old school NFL stadiums, kind of one of the originals. The atmosphere tonight was awesome."