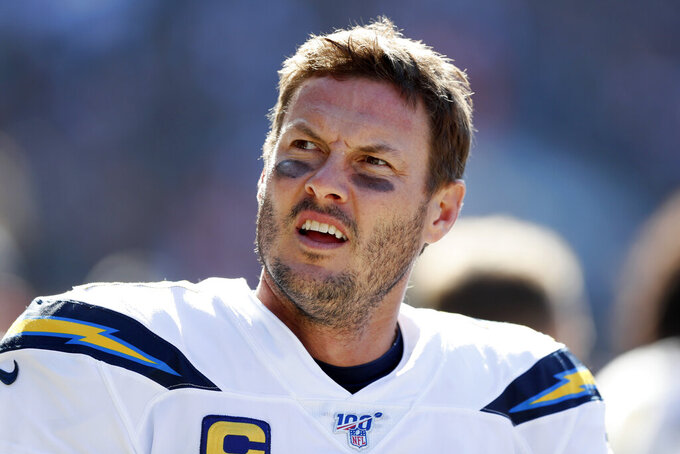 FILE - In this Oct. 27, 2019, file photo, Los Angeles Chargers quarterback Philip Rivers walks on the sideline during the first half of an NFL football game against the Chicago Bears in Chicago. The Indianapolis Colts are eager to find out what Rivers has left. They signed him to a one-year, $25 million contract in March, with the hope he'd make them a playoff team and possibly a Super Bowl contender. (AP Photo/Charlie Neibergall, File)

Masks became standard fare. A slow, finely-turned ramp-up to padded practices became all the rage. And Rivers' go-to look over the past 16 years, clad in Chargers gear, was replaced by Colts attire.

Yes, it will take some getting used to seeing Rivers in new colors but the 38-year-old quarterback already seems to be getting comfortable in his new digs.

“It’s a great environment here, from the top down. It's a neat place," Rivers said Wednesday on a Zoom call, emphasizing he also enjoyed his time in Los Angeles and San Diego. “I know it's a new place and I’m still on a high from Day 2 or 3 (of workouts). But it’s a great place, a great environment and I’m excited to see what we can get done this year."

The Colts are eager to find out what Rivers has left, too, after signing him to a one-year, $25 million contract in March, with the hope he'd make them a playoff team and possibly a Super Bowl contender.

It's a risky move given the mixed results of other late-career changes.

For every Peyton Manning, who won his second Super Bowl ring after leaving Indy for Denver at age 36, there are Hall of Famers such as the late John Unitas or Joe Namath who struggled.

Some critics contend Rivers belongs in the second category after throwing 20 interceptions last season, tied for the second-highest total of his career and third most in the NFL last season. His rating of 85.5, the lowest since 2007, only fueled the perception Rivers was nearing the end of a brilliant career.

But when Colts coach Frank Reich pored through Rivers' tape from 2019, he saw the same competitor, the same winner, the same quarterback he worked with in San Diego.

“As far as anything that’s changed with Philip, I don’t see anything," Sirianni said last week. “He’s still the same consistent 16-year vet."

It's not the first time Rivers has switched teams. After being selected with the fourth overall pick in the 2004 draft, the New York Giants dealt Rivers to San Diego for Eli Manning.

But instead of arriving as a highly hyped rookie trying to prove himself, Rivers comes to Indianapolis with a long, illustrious resume.

He has the league's longest active streak of consecutive starts (224), No. 2 all-time among quarterbacks.

But after all that success, and no Super Bowl appearances, the Colts asked Rivers to make some changes.

“He’s had to buy into some things that we do here nutritionally and workout wise that he’s never had to experience before," Ballard said last week. “It’s just different for him, but he bought into it."

There will be more changes on the field and in the locker room, too.

With incumbent starter Marlon Mack and second-round draft pick Jonathan Taylor running behind one of the league’s top offensive lines, the Colts also intend to take a run-heavy approach that they think will make Rivers more productive.

The Zoom calls Indy used, in part, to help offensive players get accustomed to Rivers' voice and cadence seems to have worked. Rivers credits those sessions for no false starts on the first day of walkthroughs.

And with locker rooms socially distanced, Rivers is still trying to learn names, faces and personalities.

“It’s a little bit of a challenge in these mask things we’re wearing," he said. “I feel like I’ve got the offense pretty well down, but I’m trying to get a feel for the defensive guys and seeing their name plates."

But one thing is clear: Rivers' new fashion statement is already a big hit.

“As old as Philip is, he’s youthful in terms of his energy," left tackle Anthony Castonzo said. “Just being around him in the locker room and hearing him talk and the messages he gives, he’s got that kiddish excitement. I think that is kind of the unique thing that he brings, that he is playing like he is back in middle school.”

Notes: Two more players — cornerback Marvell Tell III and safety Rolan Milligan — have opted out of playing this season. They join linebacker Skai Moore, who announced Tuesday he wouldn't play. Rivers said he never considered opting out because it probably would have been the end of his career.