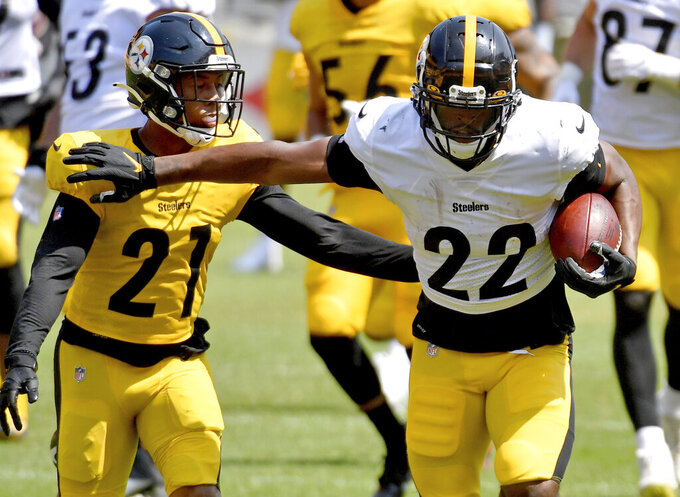 In his rookie season, Harris, the team’s 2021 first-round pick, will be tasked with playing behind a revamped offensive line, while also helping to improve a rushing attack that ranked last in the NFL last season.

Harris will get his first opportunity during Thursday’s Hall of Fame game against Dallas. Steelers coach Mike Tomlin said the rookie will play in all four preseason games.

“He needs the process of game preparation and then ultimately play,” Tomlin said. “I’m excited about watching him do that for the first time. I think he’s going to learn and grow from that, aside from actual play in the game.”

The ground game was an offseason focal point for the Steelers.

Pittsburgh rushed for more than 100 yards in each of its first five games of 2020, but topped the century mark just once during its final 12 games. The Steelers rushed for fewer than 52 yards seven times during that span, as Pittsburgh stumbled down the stretch with losses in five of its final six games, including a 48-37 blowout against Cleveland in the first round of the playoffs.

Pittsburgh’s inability to run the ball allowed defenses to figure out a predictable short passing attack. The Steelers selected Harris with the 24th overall pick in the 2021 draft to aid quarterback Ben Roethlisberger and a passing game that ranked seventh in the AFC and 15th in the NFL.

“He loves football,” offensive coordinator Matt Canada said of Harris. “He’s as advertised as far as his work ethic. Obviously, expectations are what they are, but the way he works, the way he prepares, he’s going to do everything he can to be ready to play, and that’s a huge compliment to him and the way he’s going after it.”

Tomlin has enjoyed the rookie’s competitive nature, particularly during backs-on-backers, a one-on-one drill in which a running back attempts to block a blitzing linebacker. Harris clashed with Marcus Allen and starting linebacker Alex Highsmith. The rookie also shared a chest bump with Roethlisberger after a memorable repetition with linebacker Robert Spillane.

“Najee likes competition, and he doesn’t run away from it, he runs to it,” Tomlin said. “He has a long way to go from a growth standpoint in terms of techniques, but I like his appetite for competition.”

Harris finished his college career No. 1 in Alabama history with 3,843 rushing yards and 57 total touchdowns. Harris, who caught 43 passes for 425 yards as a senior, has also lined up out wide during training camp practices in Pittsburgh.

Harris has also flashed his skills on the ground, whether it’s a quick burst through the seam or the ability to gain tough yardage. During one particular training camp run, Harris looked like he was stopped in the backfield, but he made veteran defensive tackle Cam Heyward miss.

“The thing I love about Najee, even in college, is that he was able to fight for extra yards even though his offensive line missed a block or two,” Heyward said. “He made me miss and got five yards. I hate it now, but I’ll like it during the season.”

“This is the NFL, and not every run is going to be blocked perfectly,” Harris said. “I try to create as much as I can when the play isn’t blocked. My job is to make the most out of every run.”

NOTES: Tomlin said some veterans won’t play against Dallas, including Roethlisberger, Heyward and CB Joe Haden. ... Tomlin said Mason Rudolph will start at quarterback on Thursday, Dwayne Haskins will finish the first half, and Josh Dobbs with close out the game. ... TE Pat Freiermuth, the team’s second-round pick, left Tuesday’s practice with a shoulder injury.