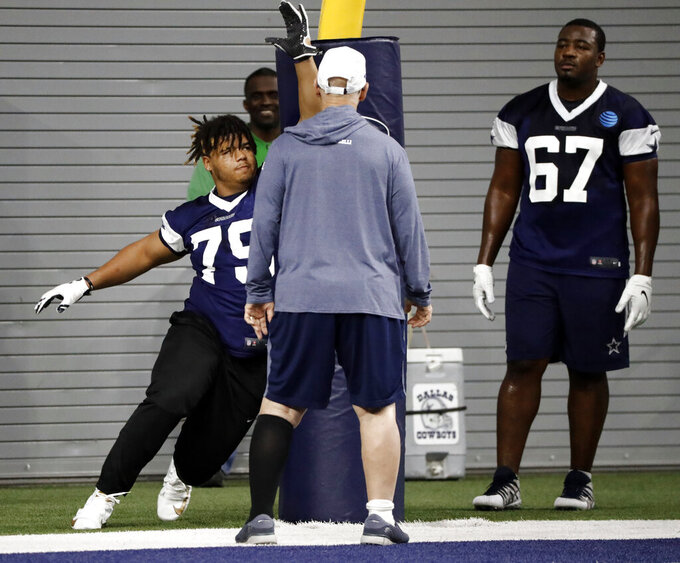 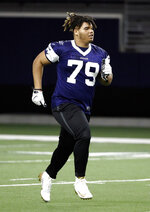 FRISCO, Texas (AP) — Trysten Hill spent part of his 21st birthday talking football with Dallas defensive coordinator Rod Marinelli, about a month before the Cowboys made the former Central Florida defender their first pick of the draft in the second round.

At the time, Hill was dealing with questions about his final season with the Golden Knights, when a coaching change resulted in the defensive tackle starting just one game after Hill was a full-time starter for two seasons under former coach Scott Frost.

Hill sold the no-nonsense Marinelli that night and in other conversations before the draft, and ultimately won over enough of the Dallas staff to get taken 58th overall by a team that didn't have a first-round pick because of a trade for receiver Amari Cooper last season.

Now it's time for Hill to build on that first impression, starting with rookie minicamp this weekend.

"I think that kind of got fueled the wrong way," Hill said of his relationship with the UCF staff under Josh Heupel, Frost's replacement following a 13-0 season in 2017. "I know what it's like to be coached by all different types of coaches. The emotional coach and the demanding coach. I respond well to both."

Hill, who showed displeasure with his playing time after a Fiesta Bowl loss to LSU that snapped UCF's 25-game winning streak, acknowledged that he could have handled the coaching transition better. But he said he went back to UCF after the draft and thanked the coaches for helping him mature and achieve his goal of reaching the NFL.

"I can't go back in the past and change that," Hill said. "Ever since then I have gone back to UCF and talked and been able to go out to practice. I know having my roots at UCF is really important and I want to keep establishing that."

Hill also said the coaching change helped him on the field, because of a switch to the 4-3 that gave the Cowboys a better glimpse of how the 308-pounder fits on the interior of their defensive line. He's a backup to three-year starter Maliek Collins — for now.

"It's unbelievable how hard he plays," Marinelli said. "You'd be hard pressed to see any guy playing that hard at just about every position. It's just about every down, his motor is running. When you see that, that reflects football character."

Owner Jerry Jones has no concerns about the rest of Hill's character, despite the mystery surrounding his junior season at UCF before Hill declared early for the draft.

"When you have a change in a coaching staff, especially if you have it at that critical juncture when you're getting ready to finish your college career, it's like losing a parent to some degree," Jones said. "And that's quite an adjustment for anyone."

Being a backup his final season at UCF didn't affect Hill's production. He had the best year of his college career, with three sacks and 10 1/2 tackles for loss. His 36 tackles also were his collegiate high.

Hill is joining a defensive line led by DeMarcus Lawrence, who just signed a $105 million, five-year contract with the highest per-season average ($21 million) in club history. Robert Quinn, who had three seasons of double-digit sacks in his first four years, came in a trade with Miami.

Marinelli has high hopes that Hill can be a threat as a pass rusher from inside. The longtime coach considers that potential weapon the most important on his defense.

"I've always had a philosophy, you develop the man first and then you develop the player," Marinelli said. "It's important to me that I help him become the man he wants to be. That usually happens through the work that we do. Then we've got to help him be a good player."

Making an impression on Marinelli was important enough to Hill for him to spend a milestone birthday sitting at "two little chairs pulled up to a table," talking drills and other football matters.

"That's the experience that I'm happy to look back at and say that I spent my 21st with my coach," Hill said.

It helped the Cowboys believe Hill was coachable.