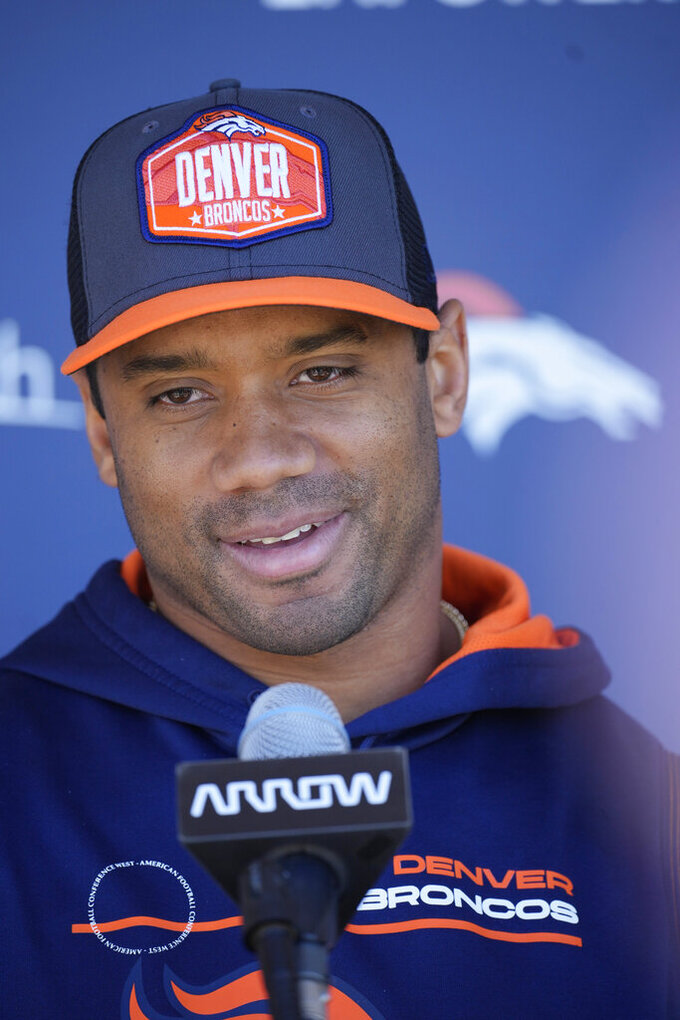 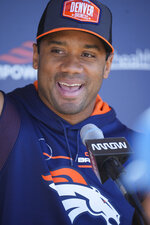 ENGLEWOOD, Colo. (AP) — Russell Wilson stepped up to the podium Wednesday without the noticeable limp he had after pulling a hamstring in the Broncos' 19-16 overtime loss to the Chargers less than 48 hours earlier and declared himself a quick healer.

“It's feeling better every day,” Wilson said. “Day by day. Obviously it happened Monday night, but I heal quick. I don't know if it's Wolverine's blood or what. But I feel better.”

The Broncos (2-4) will try to snap a three-game skid Sunday when they host the surging New York Jets (4-2).

Asked if he expects to play, Wilson said, “I'm hoping so. I'm doing everything I can to get ready to roll. So, that's always my mentality.”

The only games Wilson has missed in his 11 NFL seasons came during his final season in Seattle last year when he sat out three games with a broken finger.

Wilson hadn't emerged from the locker room by the time reporters were ushered off the practice field Wednesday during the team's walkthrough.

The only players wearing helmets during the condensed viewing period were backup QB Brett Rypien and veteran QB Josh Johnson, who's on the practice squad.

That was an indication they would get plenty of snaps Wednesday when Wilson was listed as “limited” on the practice report.

Coach Nathaniel Hackett said Rypien got abundant snaps with the No. 1 offense last week after Wilson flew to Los Angeles to receive an injection to alleviate discomfort near his throwing shoulder.

Wilson started last week but posted his sixth straight middling performance that has called into question the hybrid offense installed by Hackett that often has Wilson in the shotgun instead of under center.

The Broncos are last in the league in scoring at 15.5 points per game and Wilson is off to the worst start of his career. He has five touchdown passes and 20 sacks so far and he was just 3 for 11 for 15 yards after halftime Monday night.

Wilson looked on the bright side — he completed his first 10 passes against the Chargers and started out 12 of 14 for 173 yards and a score, driving the Broncos to an early 10-0 lead and then leading them quickly downfield for a field goal and a 13-10 halftime advantage.

“I think that's who we are, who we can be,” Wilson said. “I think we have to stay focused on the details, focused on doing the little things right and making plays.”

Asked if listing Wilson as “limited” falls on the hopeful side of the equation, Hackett said, "Yeah, of course. With him, he's a very tough competitor. He's going to do every single thing that he can to possibly be able to get out on that field" Sunday.

Hackett also said running back Melvin Gordon would start against the Jets as he has in the two games since Javonte Williams sustained a season-ending knee injury against the Raiders on Oct. 2.

Hackett said he met with Gordon, who didn't get any carries after the 8:26 mark of the second quarter Monday night as newcomer Latavius Murray carried 15 times for 66 yards.

“It was a great talk, love Melvin, so much respect for him as a pro for what he’s done in this league,” Hackett said.

Gordon finished with 8 yards on three carries, then retweeted a bunch of tweets suggesting the Broncos trade him.

Asked if he got an explanation from Hackett, Gordon said “Yeah, kind of, sort of, yeah.’’

Gordon said the TV cameras "caught some clips of me being, like, (ticked off) but that was more to us not being able to drive, and you know, going three-and-out, just not playing good football. People made it seem like I was just mad, kind of standoffish, but if you were really paying attention, that wasn’t the case.

“I hate I’m in the media for the wrong reasons," Gordon added, “because I don’t want people to look at me and think ‘it’s always something’ rather than the guy’s out here killing it.”

“Of course, I mean, he’s a young man, he’s done a really good job. He’s had some very explosive plays,” Hackett said. “You can see that he is a dynamic returner. He just needs to lock in and focus and catch the ball first.”