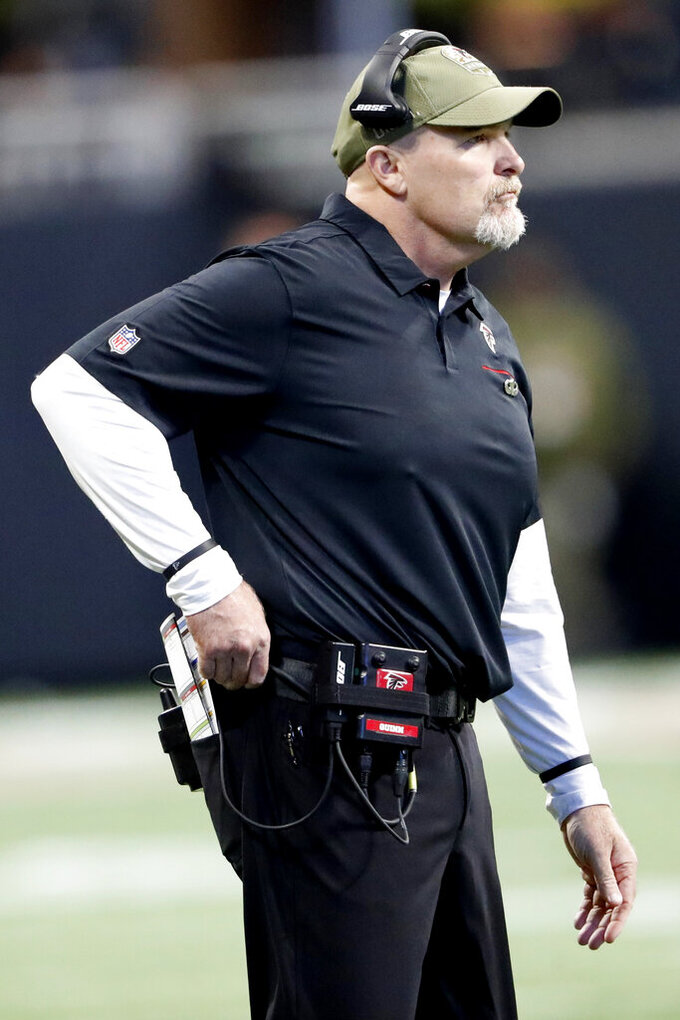 Atlanta Falcons head coach Dan Quinn speaks to his team during the first half of an NFL football game against the Tampa Bay Buccaneers, Sunday, Nov. 24, 2019, in Atlanta. (AP Photo/John Bazemore)

ATLANTA (AP) — The New Orleans Saints can settle a score when they visit the Atlanta Falcons on Thursday night.

The Saints (9-2) also can clinch their third straight NFC South title by beating the Falcons. That’s the more important motivation.

“Everybody in this locker room has that on their mind,” said Saints defensive tackle Sheldon Rankins of the three-peat goal.

The Falcons shocked the Saints 26-9 on Nov. 10 in New Orleans. It was the Saints’ only loss in their last nine games.

“We didn’t play good football last time,” said Saints linebacker Demario Davis. “We didn’t stop the run well. We didn’t get off the field on third down. We didn’t create turnovers, weren’t good in the red zone. We’ve got to get better all the way around, for sure.”

The Falcons know they can’t expect the same results, especially when facing an offense led by Drew Brees.

“You know Drew. He's the type player, if you got him with a disguise the first time, if you beat him with a certain coverage the first time, you can't just try to bring that out there and do it again, because he's a guy who is always studying,” said Falcons safety Ricardo Allen. “... He's not going to be fooled too many times.”

The impressive showing at New Orleans was the first of two straight wins in which Atlanta did not allow a touchdown, raising hopes for a second-half turnaround. Instead, the Falcons (3-8) returned to their losing form in Sunday’s 35-22 home loss to Tampa Bay, regaining sole claim to last place in the division.

The two straight wins followed Quinn shaking up his coaching staff in a bye week. Most notably, Raheem Morris moved from wide receivers coach to the secondary. Morris and linebackers coach Jeff Ulbrich are calling the plays on defense, a duty Quinn held as the self-appointed defensive coordinator to start the season.

The rematch with the Saints may help Blank and Falcons fans conclude if meaningful fixes have been found to problems that led to a 1-7 start.

Falcons running back Devonta Freeman could return after missing two games with a sprained foot. Saints cornerback Marshon Lattimore could return from a hamstring injury. Lattimore was hurt while trying to cover Julio Jones on Nov. 10 and has not played since. Jones missed practice time with a shoulder injury this week. Atlanta tight end Austin Hooper is expected to miss his third straight game with a knee injury.

The Saints are racking up 7.8 penalties per game, the second-highest number since coach Sean Payton took over as head coach in 2006. Only 2015 was worse. Frequent among this season’s penalties have been holding calls against the offensive line and hands-to-the-face calls against pass rushers.

The Saints were flagged for 12 penalties the last time they met the Falcons and 12 more last Sunday against Carolina.

After a combined 11 sacks in wins over the Saints and Carolina, the Falcons did not have a sack in last week’s loss to the Buccaneers. Meanwhile, Falcons quarterback Matt Ryan was sacked six times, a season high, and took an additional 12 hits.

“My thing is, stay confident … and those guys will,” Ryan said of his offensive line.

Michael Thomas caught 13 passes for 152 yards against the Falcons on Nov. 10 and has five straight 100-yard games. Thomas is the NFL’s second-highest paid receiver, behind Jones, who had three catches for 79 yards in the first meeting. Thomas leads the NFL with 104 receptions for 1,242 yards, while Jones has 64 catches for 950 yards. Jones has been held without a touchdown since having four in the first three weeks, while Thomas is on a record pace in several categories.

New Orleans’ left side of the line will be comprised of players who have not played much this season. With Andrus Peat already sidelined by a fractured forearm, Terron Armstead went out with an ankle sprain against Carolina last Sunday and wasn’t expected to return at Atlanta on a short week. In their places are Nick Easton at left guard and Patrick Omameh at left tackle. Brees was sacked a season-high six times in the loss to Atlanta earlier this month.

By The Associated Press 10 minutes ago
By Tim Dahlberg 8 hrs ago
By Maryclaire Dale 10 hrs ago
By Dan Greenspan 11 hrs ago
By W.g. Ramirez 13 hrs ago