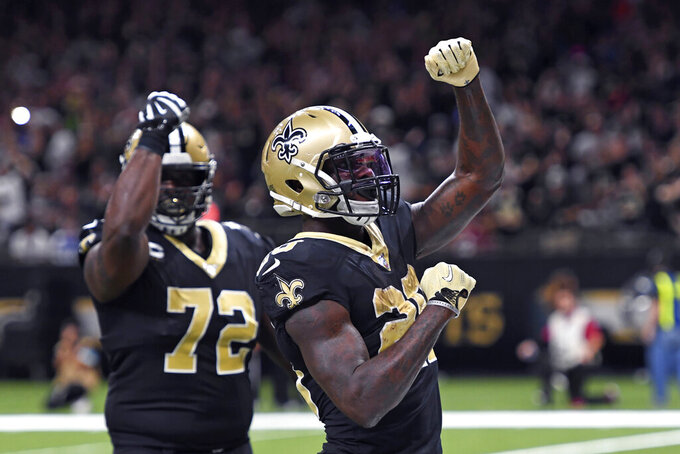 New Orleans Saints running back Latavius Murray celebrates his touchdown with offensive tackle Terron Armstead (72) in the first half of an NFL football game against the Arizona Cardinals in New Orleans, Sunday, Oct. 27, 2019. (AP Photo/Bill Feig)

NEW ORLEANS (AP) — Drew Brees had the Arizona Cardinals under his surgically repaired and splint-aided thumb.

Brees passed for 373 yards and three touchdowns in his first game since thumb surgery more than five weeks ago, and the New Orleans Saints won their sixth straight with a 31-9 victory Sunday.

"I definitely had some butterflies, maybe a little more than usual," Brees said. "A lot of it was just excitement. And then as game time approached, that just turned into gratitude — just grateful for the opportunity to get back out there again. I'm grateful for this team. I'm grateful for just this moment."

With few exceptions, Brees was accurate and looked composed, even when his pass blocking collapsed. He completed 34 of 43 passes and was not sacked.

Cardinals rookie Kyler Murray completed 19 of 33 passes for 220 yards, but Arizona never reached the end zone. Eight of Murray's completions went to Christian Kirk for 79 yards in the receiver's return from an ankle sprain.

"We just didn't win enough of our individual matchups today," said receiver Larry Fitzgerald, who had two catches for 8 yards. "You have to win those against a great defense like this one."

Arizona (3-4-1), which saw its three-game winning streak snapped, was held to 40 yards rushing and the Saints' defense held a fifth-straight opponent below 260 total net yards.

"You see the tenacity of the defense on each and every play," said defensive end Cam Jordan, who sacked the elusive Murray once. "That's something that I'm in love with right now."

With backup Teddy Bridgewater filling in, the Saints (7-1) had won all five games since Brees' ulnar collateral ligament surgery on Sept. 18. But coach Sean Payton said during the past week that the 40-year-old Brees had been medically cleared and that there were no misgivings about playing the NFL's all-time leading passer as soon as he felt ready.

"As soon as I could grip it and rip it, then I wanted to play," Brees said. "I love the game. I love my teammates. I want to get out there with them."

Brees led four drives in the first half in which the Saints threatened to score, but one ended with a missed field goal and the other with a nullified touchdown pass because offensive holding was called as time ran out in the second quarter. The other two drives ended with a short field goal and Murray's 8-yard TD run, giving New Orleans a 10-6 halftime lead

Brees' first touchdown pass was set up by Cardinals coach Kliff Kingsbury's curious decision to keep the offense on the field on fourth-and-1 near the Arizona 30. After a third-down screen had fallen incomplete, Kingsbury called a run up the middle against one of the NFL's better defensive fronts.

Chase Edmonds was stopped at the line of scrimmage and the ball was turned back over to New Orleans just a four plays after Peterson's interception.

"After getting the turnover, we had to make something happen," Kingsbury said. "The analytics plus myself, I was all for that. We had two shots to get a half-yard and didn't do it."

With Saints top running back Alvin Kamara sidelined by ankle and knee soreness, Murray had his second straight productive performance. He rushed 21 times for 102 yards and a touchdown and caught nine passes for 55 yards and a score. A week earlier in Chicago, he rushed 27 times for 119 yards and two TDs.

"It felt like he was a great outlet and was getting us a lot of positive yards," Brees said. "The touchdown catch, it was a great all-around play by him to get open and then turn what is normally a 7-yard gain into a (15-yard) touchdown."

On the next series, a 36-yarder from Brees to Taysom Hill set up Thomas' 9-yard TD reception.

Cardinals: Linebacker Cassius Marsh Sr. was concussed and did not return after he tackled Thomas for a loss on a reverse-toss play on New Orleans' opening drive. ... In the second half, Edmonds limped off with a hamstring injury.

Saints: Center Erik McCoy, a second-round draft pick who was the first player selected by New Orleans last spring, received attention on the field and walked slowly to the sideline late in the first half, but returned in the second half.

Saints: Enter their Week 9 bye and play next at home against Atlanta on Nov. 10.