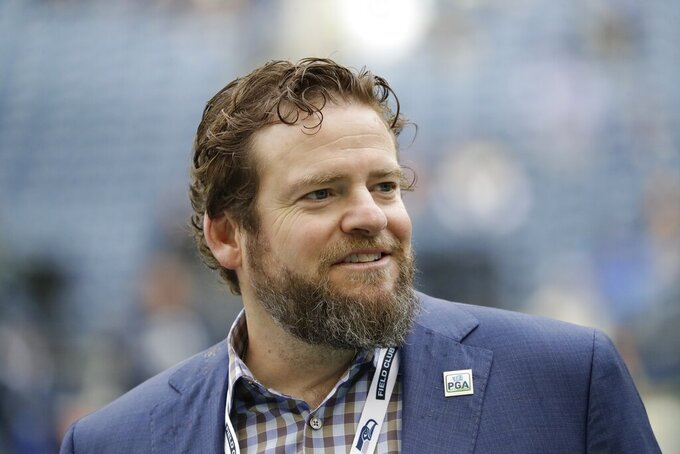 Seattle Seahawks general manager John Schneider walks on the field during warmups before an NFL football game against the Los Angeles Rams, Thursday, Oct. 3, 2019, in Seattle. The Seahawks have agreed to a contract extension with general manager John Schneider that will keep him tied to the franchise through the 2027 draft. The Seahawks announced Schneider’s extension on Tuesday, Jan. 12, 2021, three days after their season ended in a 30-20 loss to the Los Angeles Rams in the NFC wild-card playoff game. (AP Photo/Elaine Thompson)

RENTON, Wash. (AP) — The Seattle Seahawks have agreed to a contract extension with general manager John Schneider that will keep him tied to the franchise through the 2027 draft.

The Seahawks announced Schneider’s extension on Tuesday, three days after their season ended in a 30-20 loss to the Los Angeles Rams in the NFC wild-card playoff game. Schneider’s current contract was signed in 2016 and went through the 2021 season. The new deal keeps him on a similar timeline with head coach Pete Carroll, who signed a contract extension through the 2025 season last year.

“I am pleased to announce that we have extended the contract of general manager John Schneider through the 2027 draft,” Jody Allen, chair of the Seahawks said in a statement.

“For the last decade, John and head coach Pete Carroll have formed a tremendous partnership and the Seahawks have established a successful, unique, and truly winning culture respected throughout sports. I know we are all excited to see that continue.”

Schneider arrived as general manager in 2010 after Carroll had been lured from college football to take over the Seahawks. The duo has worked lockstep for the past decade in making Seattle one of the top franchises in the NFL. The Seahawks have reached the postseason in nine of the 11 seasons they have been in charge, including their fifth NFC West title this past season.

Schneider’s extension ends some brief speculation that emerged late in the regular season that other teams might be curious in seeing if he might be interested in moving on from Seattle.

Green Bay was always seen as a potential option in Schneider’s future, but his previous contract extension with the Seahawks in 2016 removed a clause that would have allowed the Wisconsin native to return to his home state and take over Packers if the opportunity presented itself.

When asked a couple of weeks ago about a report of Detroit having interest, Schneider said on the team’s pregame radio show, “Traci and I — my wife and I — love it here, obviously. Great team, great ownership, coach Carroll, the city, the 12s, everything.”

Schneider, who will turn 50 in May, is most highly regarded for what he’s accomplished in the draft during his time with the Seahawks, notably the 2012 draft that landed Russell Wilson and Bobby Wagner.

The Seahawks had a run of poor draft classes following that 2012 group, but Schneider and his staff have found more hits in recent seasons including wide receiver DK Metcalf and rookie linebacker Jordyn Brooks.

This season, Schneider received raves for landing cornerback D.J. Reed off waivers and the trade for Carlos Dunlap from Cincinnati. Reed became a starter late in the season and Dunlap was a key to the turnaround of Seattle's pass rush.

Still unresolved is the final verdict on Schneider's trade for Jamal Adams last summer. Adams was a second-team All-Pro selection and set a record for most sacks by a defensive back. But Seattle mortgaged a big chunk of its future sending first-round picks in 2021 and ‘22, and a third-round pick in ’21 as part of the compensation for Adams.

“I think this team and how we put it together, John deserves so much credit because I just think he’s just had a great vision for all of this,” Carroll said last month.