Seahawks hope for another standout effort from Jefferson 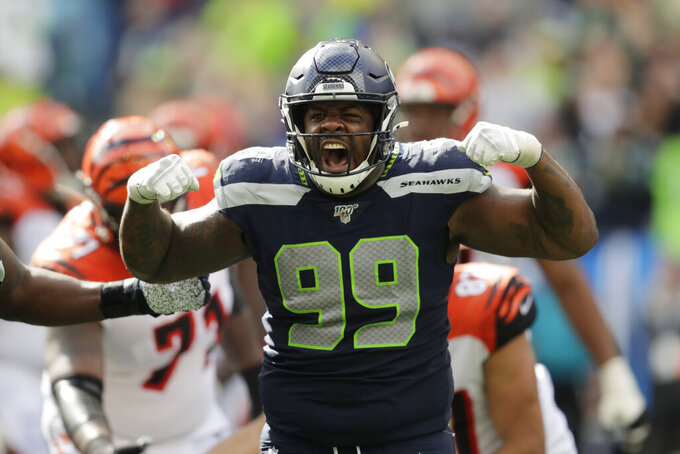 RENTON, Wash. (AP) — The arrival of Jadeveon Clowney in Seattle was bound to create opportunity for others. The amount of attention opponents will need to direct toward Clowney should give someone else on the Seahawks defense a chance to shine.

For Week 1, it was Quinton Jefferson. And the timing couldn't be more fitting. The best game of his career coming right before a return to his hometown for Sunday's matchup at Pittsburgh.

"It just like, it kind of came together," Seattle coach Pete Carroll said. "We've seen him all throughout the off season with a lot of confidence. He's felt really good about his chances to be a factor. Through camp, he was good. It's just a real good accomplishment for him and hopefully we can take off and see it again."

Jefferson has been an unheralded journeyman during his young career as a defensive end. He's been cut twice. He's suffered a major injury, twice — once in college and again during his rookie season. He's made notable mistakes he would like to forget.

Through it all, the 26-year-old has persevered and in the past two years has found a role in Seattle that fits his skills. Last year he started 12 of 16 games in the regular season and set career highs with 25 tackles and three sacks.

And his start to this season only raised the expectations for what Jefferson can bring. He had six tackles, two sacks, three quarterback hits, two tackles for loss and two passes defensed in Seattle's 21-20 win over Cincinnati in Week 1. Not every week is going to be that good, but Jefferson is the first to take advantage of Clowney's arrival.

"Everything happens for a reason. Maybe I needed to get my ACL torn, maybe I needed to get cut," Jefferson said. "But I appreciate where I am now. I know what it's like to be on the other side, and I never want to go back there. That's why I work hard every day to do my job and make plays."

Clowney's addition was an immediate boost to what was one of Seattle's biggest worries going into the regular season. After the trade of Frank Clark and the suspension of Jarran Reed for six games, Jefferson was the returning leader in sacks for Seattle.

"He played great ball but it's not a surprise," Seattle defensive line coach Clint Hurtt said. "I felt like he had a really good season last year. Coming in with the offseason and just being another year with him, I felt he could take his game to another level. His confidence level was high going into that game, so he'll just continue to build off of that."

The return home this week is a unique experience for Jefferson. He grew up a Steelers fan and playing at Heinz Field was always a goal as a high school player, something he had the opportunity to do twice.

But it's been more than a year since he's been back to the Pittsburgh area, so Carroll made a point of talking to Jefferson this week about balancing family time with football, especially after such a big season debut.

Jefferson said it won't be a problem.

"I'm going to treat it like any normal game. I still want to make my plays and stuff, but I'm not going to go too crazy and try to do stuff I've never done before," Jefferson said. "Like coach says don't make (stuff) up. Do what you're coached to do, what you do every day and we're going to have some fun."

NOTES: Seattle rookie DE L.J. Collier (ankle) could have a chance to play this week after missing most of training camp. ... G Mike Iupati (calf) will be the starting left guard when he's healthy enough to go, Carroll said. Ethan Pocic started the opener. ... DT Poona Ford (calf) and DB Ugo Amadi (shoulder) both are uncertain to be available. Ford did not practice Wednesday while Amadi was limited.