Seahawks' Wilson: 'I don't even want to talk about football' 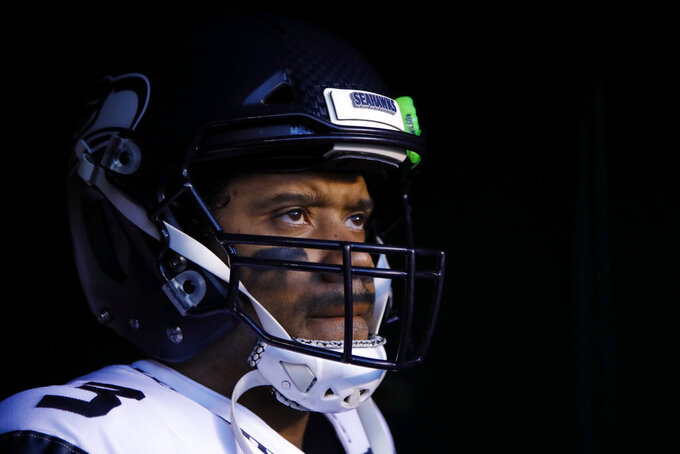 FILE - In this Jan. 5, 2020, file photo, Seattle Seahawks' Russell Wilson waits to run onto the field for the team's NFL wild-card playoff football game against the Philadelphia Eagles in Philadelphia. Speaking to the media for the first time since the end of last season, Wilson didn't care to talk about the game that’s helped make him famous. “To be honest with you, I don’t even want to talk about football right now,” Wilson said during a video conference Wednesday, June 3. "I can’t compare football to life and what the black community is going through right now,” he said. (AP Photo/Matt Rourke, File)

RENTON, Wash. (AP) — Speaking to the media for the first time since the end of last season, Seattle Seahawks quarterback Russell Wilson didn't care to talk about the game that’s helped make him famous.

“To be honest with you, I don’t even want to talk about football right now,” Wilson said during a video conference Wednesday. “You know, that’s a thing that I don’t even know what that looks like down the road or anything else. I think that none of that matters. I can’t compare football to life and what the black community is going through right now.”

Wilson’s 35-minute session was as emotional as he’s been in any formal media setting during his eight previous seasons in Seattle. He relayed stories from his youth in Richmond, Virginia, and about raising two kids now with a third on the way.

At times in the past, the conversation with Wilson may have centered on offseason changes to Seattle’s offense and whether Wilson has enough weapons for the Seahawks to contend in a challenging NFC West.

But Wilson didn’t want to talk Xs and Os, personnel changes or even the strange virtual offseason. His tone was similar to how Seattle has run its team meetings since last week following the death of George Floyd in Minneapolis and the nationwide protests that have followed.

A white police officer has been charged with second-degree murder in the death of Floyd, a black man who was handcuffed. Prosecutors on Wednesday expanded their case against the officers who were at the scene of Floyd’s death, charging three of the officers with aiding and abetting a murder and upgrading the charges against the officer who pressed his knee on Floyd’s neck.

On his “Flying Coach,” podcast released late Tuesday night, coach Pete Carroll said he felt he has not done enough to create change.

“We’re trying to interact as much as we can with our guys and hear from them and listen and learn and grow, and find a place where we can act and do something really positive,” Carroll said. ”Our club has done that over the years, but we need to do more, we’re never done."

Earlier this week, linebacker Bobby Wagner said he attended protests in Seattle and that team meetings had gone away from football.

Wilson has been with teammates during his time in Seattle who have never shied away from taking on social issues, whether it was Richard Sherman, Doug Baldwin, Michael Bennett, or others, speaking out.

Wilson said that in smaller group sessions, the conversations have focused on asking players about their past experiences and that several white players have asked Wilson what they can do to listen and make a difference. He said change won’t be immediate, but he’s hopeful it will happen.

"This is going to take real significant change, and sometimes those things take time,” Wilson said. “But the reality is this didn’t just happen yesterday. This doesn’t happen just yesterday or two days ago. This has been going on for years. And I believe that we’re going to do everything we can to be a part of that change.”