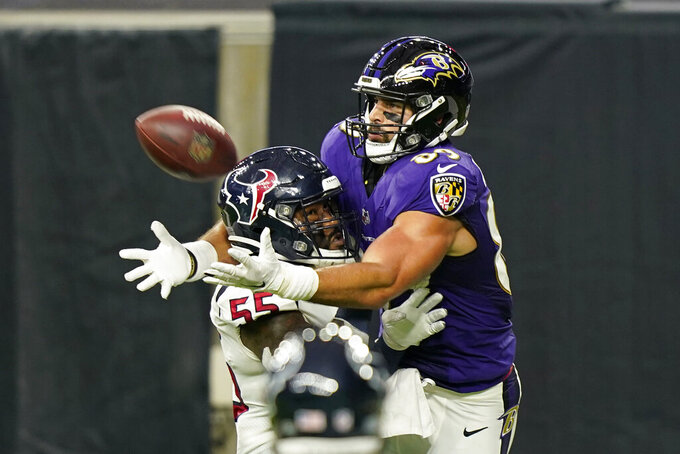 FILE - In this Sept. 20, 2020, file photo, Houston Texans inside linebacker Benardrick McKinney (55) breaks up a pass intended for Baltimore Ravens tight end Mark Andrews (89) during the second half of an NFL football game in Houston. The photo was part of a series of images by photographer David J. Phillip which won the Thomas V. diLustro best portfolio award for 2020 given out by the Associated Press Sports Editors during their annual winter meeting. (AP Photo/David J. Phillip, File)

Well-reported stories on a wide-range of topics from the pandemic, plight of Black coaches and insightful human interest features stood out in the annual contest for AP staffers judged by the Associated Press Sports Editors.

Judges praised reporters for their investigative reporting, ability to find off-the-beaten path features on major events and knowledge of their beats.

The judges said while college football has become essential to America’s higher education system perhaps the most uncomfortable issue is the plight of Black coaches, who deal with obstacles that never go away, but are often forgotten by the general public for long periods of time. The judges said Newberry's “ timely piece elegantly analyzed the issue again months before the country’s problems with overall racial equality again erupted."

Pells won the Grimsley Award with an entry judges said was “filled with a well-reported variety of stories, ranging from investigative pieces to off-the-beaten-path features on big events where new angles are hard to find."

The judges said, “A lot of ground was covered here -- on deadline -- to put a bow on possibly the league and its storied franchise that collectively experienced some of the most ups and downs during the rollercoaster of a year that was 2020."

The judges praised Marot for finding and reporting a story that “in a year full of big-picture storylines that have led to significant transitions in our society, the reporter found one small, heartwarming and hopeful moment inside one of America’s best-know sports venues about a family and community just trying to get to the next day of life."

Package of the Year honors went to the sports staff's efforts on the NFL At 100 series — a season package of stories, polls, videos and photos, taking advantage of AP archives and new content submitted on behalf of the staff by NFL Writer Barry Wilner.

“Through a spring and summer that will mainly be remembered in the sports world for what didn’t happen," the judges said, “this series of stories and multimedia gave readers around the country a chance to escape into how a century of professional football has helped shaped the American society."

Winners in the AP photo contest categories were:

— Action Category: Antonio Calanni for his photo of Bologna’s Takehiro Tomiyasu and Inter Milan’s Romelu Lukaku fighting for the ball during a Series A soccer match between Inter Milan and Bologna.

The judges said Calanni captured “so many things happening in so many places -- all on one frame.."

— Feature Cateory: Mark J. Terrill for his photo of Los Angeles Lakers’ star LeBron James celebrating with his teammates after the Lakers defeated the Miami Heat 106-93 in Game 6 of the NBA Finals.

The judges noted that Terrill's photo had a “great feel of thrill, joy and relief after the most unusual NBA season in some time."

The judges were impressed with Phillip's range of photos, saying “the photographer captured a full variety of happenings of the 2020 world of sports in a dozen shots"