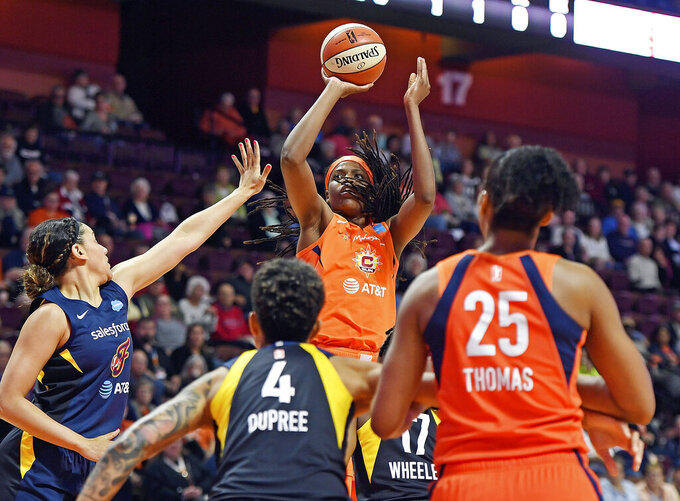 FILE - In this May 28, 2019, file photo, Connecticut Sun center Jonquel Jones shoots over the Indiana Fever defense during a WNBA basketball game, in Uncasville, Conn. Led by Jones, the Sun (8-1) have won their last six games and have started to put a little distance between themselves and the rest of the league. (Sean D. Elliot/The Day via AP, File)

The annual report card from The Institute for Diversity and Ethics in Sport (TIDES) at Central Florida on Tuesday indicated almost identical scores from last year. The grade for racial hiring was an A-plus with an unchanged 98.7 score. The grade for gender hiring was a B, but slid slightly to 80.9.

The overall grade was an A at 89.8. That was better than Major League Soccer's B-plus, the NFL with a B and Major League Baseball with a B-minus, all since January. The NHL doesn't participate in the study.

The only professional league with a higher grade from the past year was the WNBA, with an overall A-plus and 97.6 score.

Richard Lapchick, the TIDES director and lead report author, said the NBA has "always had a leadership position" regarding diversity initiatives. The study's release comes less than a week after the Cleveland Cavaliers hired California women's head coach Lindsay Gottlieb from the college level as an assistant coach, making her the seventh woman serving as an assistant coach or player development staffer.

"We always look forward to this report in particular because we know we're going to see encouraging things," Lapchick said in an interview with The Associated Press.

The study examined the racial and gender breakdowns in numerous areas, such as players, coaches, trainers, front-office staffers at the team level and positions at the NBA headquarters. It reviewed data from the 2018-19 season.

The report was particularly good for the NBA league office. It earned an A-plus for racial hiring with 37.6% of professional staff positions filled by people of color, the highest percentage recorded in the study. Women made up 39.7% of those positions for a gender grade of B-plus.

Those were both better than scores for the team level, where people of color made up 31.6% of team management positions (still an A-plus) and women filled 30.9% of those positions for a gender grade of a C.

The league also had 10 head coaches of color among the 30 franchises to start the season and earned an A-plus for its initiatives to promote diversity. Lapchick pointed to an emphasis starting under former commissioner David Stern in the 1980s.

"The NBA is the only league that didn't have to enact a Rooney rule," said Lapchick, referring to the NFL's rule requiring teams to interview at least one minority candidate when searching for a head coach.

"They've just been hiring the best candidates and bringing in a diverse pool of candidates since David took over. And then he pushed that to the team level, where they don't have control but they do have a lot of influence."