Teo returns to Saints defense for high-stakes tilt vs 49ers 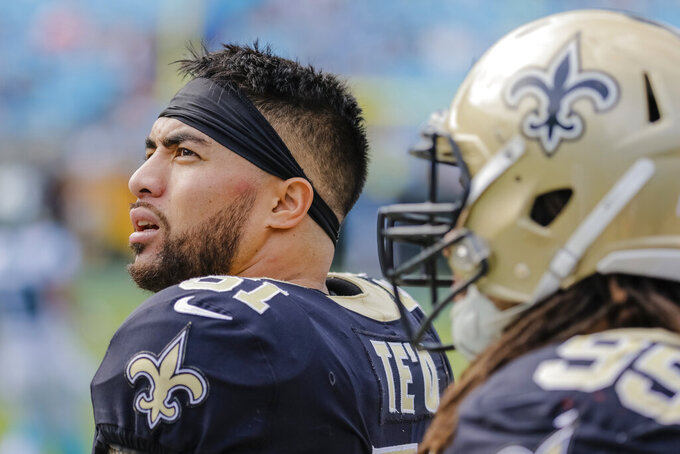 File-This Sept. 24, 2019, file photo shows New Orleans Saints' Manti Te'o (51) on the sidelines during the second half of an NFL football game against the Carolina Panthers in Charlotte, N.C. Teo has a new perspective on life and football. The New Orleans Saints could find out Sunday, Dec. 8, 2019, how Teo’s outlook affects his performance in a high-stakes clash with San Francisco that will decide who has the inside track to the No. 1 seed in the NFC playoffs. With fellow linebackers Kiko Alonso (thigh) and A.J. Klein (knee) missing practice on Wednesday and their playing status unclear, the newly signed Teo participated in an NFL practice for the first time since last season. (AP Photo/Bob Leverone, File)

METAIRIE, La. (AP) — Manti Teo has a new perspective on life and football.

The New Orleans Saints could find out Sunday how Teo’s outlook affects his performance in a high-stakes clash with San Francisco that will decide who has the inside track to the No. 1 seed in the NFC playoffs.

With fellow linebackers Kiko Alonso (thigh) and A.J. Klein (knee) missing practice on Wednesday and their playing status unclear, the newly signed Teo participated in an NFL practice for the first time since last season.

“I wasn’t sure if I was going to play football again with how everything went down last year and with me being a free agent and not getting picked up,” said Teo, who was inactive for all but five games last season. “I didn’t know when my time was going to be called. I just had faith that it was going to come.”

Teo, a 2012 Heisman Trophy finalist at Notre Dame also known for his internet relationship with a person falsely posing as a woman stricken with Leukemia, has played six seasons in the NFL with the then-San Diego Chargers and Saints.

He was not retained by the Saints in the offseason and his lone tryout with Arizona since then didn’t pan out.

But Teo said staying ready for a call wasn’t difficult because his perspective on life had changed.

“I started being more grateful for the things I have than (upset about) the things I don’t have,” said Teo, who has settled with his family in San Diego. “When I had that approach, preparing for an opportunity was easy.

“I enjoyed every day that I had regardless if it was on a football team or in San Diego,” Teo added. “I made the most of it, whether it was training or going to church.”

Toe also said he’s watched every Saints game this season, largely because of the friendships he has on the team.

“I was real familiar with the calls. I could tell what they were playing just by watching it, so I definitely kept up,” Teo said.

It’s not clear how long the Saints will keep Teo. It’ll depend in part on how quickly Alonso and Klein heal, and how well Teo plays.

While Teo was increasingly phased out last season, he was a main cog in New Orleans defense just two season ago, when New Orleans came within one unlikely play of beating Minnesota in the divisional round and advancing to the NFC title game in Philadelphia.

He played in all 16 regular season games in 2017, and started both playoff games.

“He’s a smart football player. He studies the game. He was always helpful for us out there,” defensive tackle Sheldon Rankins said, referring to how Teo would communicate with teammates about opponent formations before the snap. “He just helps you play faster, gets everybody on the same page — a true leader. He fits into this culture, fits into this locker room very well.

“He was part of the growth of this defense, this team, and I was glad to have him back in here and be a part of what we’ve been trying to build since he was here.”

Teo said that while he can appreciate the playoff implications of Sunday’s game with the 49ers, that won’t affect how he prepares.

“Everybody kind of puts it as a big game, but every game’s big,” Teo said. “That’s how the NFL is. If you don’t approach it that way, that’s how you lose.”

NOTES: Left tackle Terron Armstead, who did not play last week because of an ankle sprain, returned to practice on a limited basis on Wednesday. ... Fullback Zach Line was listed as limited with a knee injury.