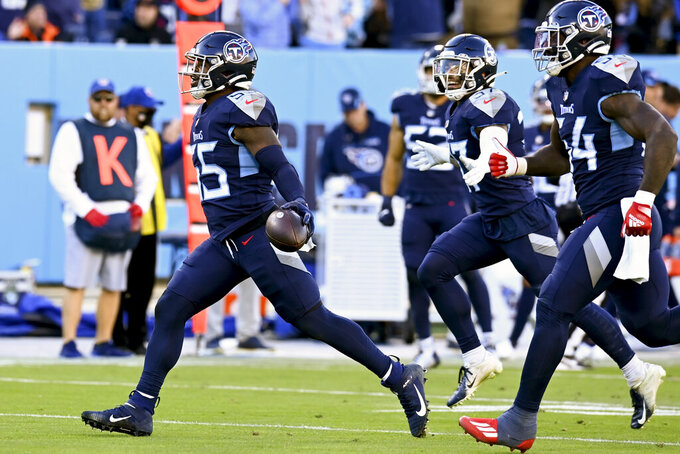 Tennessee Titans inside linebacker Jayon Brown, left, celebrates his interception against the Jacksonville Jaguars during the second half of an NFL football game, Sunday, Dec. 12, 2021, in Nashville, Tenn. (AP Photo/Mark Zaleski) 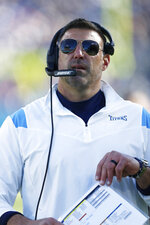 NASHVILLE, Tenn. (AP) — It took the Tennessee Titans a month to find themselves. This version looks pretty comfortable atop the AFC South.

After two turnover-filled debacles and a bye week, the Titans ended up on the other side of a turnover-fest and got back in the win column Sunday. It surely helped that they faced woeful Jacksonville and rookie quarterback Trevor Lawrence.

The opportunistic Titans took advantage of four interceptions to beat the Jaguars 20-0 and earn their first home shutout in more than two decades.

Rashaan Evans, Jayon Brown, Kristian Fulton and Buster Skrine picked off passes from Lawrence, who hadn’t thrown three or more interceptions in a game since his NFL debut.

“At the end of the day, we know what kind of team we are,” Titans safety Kevin Byard said. “And I felt like the last two losses we had, we kind of got away from that a little bit. ... It wasn’t necessarily about the Jaguars and their team. It was more about us know what we needed to do and playing to our strengths.”

Tennessee dominated Jacksonville’s offensive line, sacking Lawrence three times and prompting four holding calls and a false start. All the interceptions were a direct result of pressure, but not blitzes.

“There’s no better indication of success in this league than turnover margin,” Titans coach Mike Vrabel said. “You can say what you want, but you can look it up over 20 years. It’s real critical that we realize that that’s how we have to play.”

The Titans (9-4) turned the ball over a combined nine times in consecutive losses to Houston and New England. They spent the bye week focusing on better ball security and responded with a clean game on offense and plenty of celebrations on defense.

It was the team's first shutout since 2018 at the New York Giants and its first at Nissan Stadium since Christmas Day 2000, a 31-0 drubbing of Dallas.

Jacksonville (2-11) provided the perfect remedy for Tennessee's two-game skid. The Jaguars extended a number of streaks of their own while failing to score in a game for the fourth time in franchise history and first time since 2009.

The Jaguars lost their fifth straight overall, eighth straight in Nashville, ninth consecutive in AFC South play and 15th in a row on the road.

“Losing sucks,” said Jaguars coach Urban Meyer, who was previously shut out once in his coaching career, 31-0 against Clemson in a national semifinal following the 2016 season. “That’s all I can tell you. It eats at away at your soul. You got to regroup.”

This one comes after reports attributed to unnamed sources saying there's mounting angst between Meyer and his staff.

“So what’s the answer? Start leaking information or some nonsense? No. No, that’s nonsense. That’s garbage,” Meyer said. "I’ve been very blessed. I’ve not really dealt with that. I’ve not dealt with, ‘Well, did you hear what he said?’ What? No. Let’s improve on offense and get our quarterback in a position to be successful. That’s our focus.

“What someone’s brother said, or someone said someone said, that will occupy very little of my time. And if there is a source, that source is unemployed. I mean, within seconds, if there’s some source that’s doing that.”

The Titans moved closer to clinching the AFC South for the second straight year. They have no one left on their schedule with a winning record. And, if they continue playing clean football, could be a factor in the AFC despite being without star running back Derrick Henry.

D’Onta Foreman, filling in for Henry, had his first rushing touchdown in four years. Ryan Tannehill, the main culprit of the team’s recent turnovers, didn’t commit one despite getting sacked four times and ran for a score. He completed 20 of 31 passes for 191 yards.

Titans receiver Julio Jones retuned to the lineup for the first time in more than a month but didn’t do a whole lot. He didn’t need to, either.

Jones, who missed the past three games with a hamstring injury, was activated from injured reserve Saturday and caught four passes for 33 yards. He has missed six games this season because of injuries.

Jaguars running back Carlos Hyde was evaluated for a concussion late in the game. Titans guard Rodger Saffold left briefly in the first quarter with a shoulder injury and again in the third. Titans FB Tory Carter injured an ankle.

Jaguars: Host Houston next Sunday. The Texans have won seven straight and 13 of 15 in the series.

Titans: Play at Pittsburgh next Sunday. The Steelers (6-6-1) have extra time to prepare after losing at Minnesota on Thursday night.